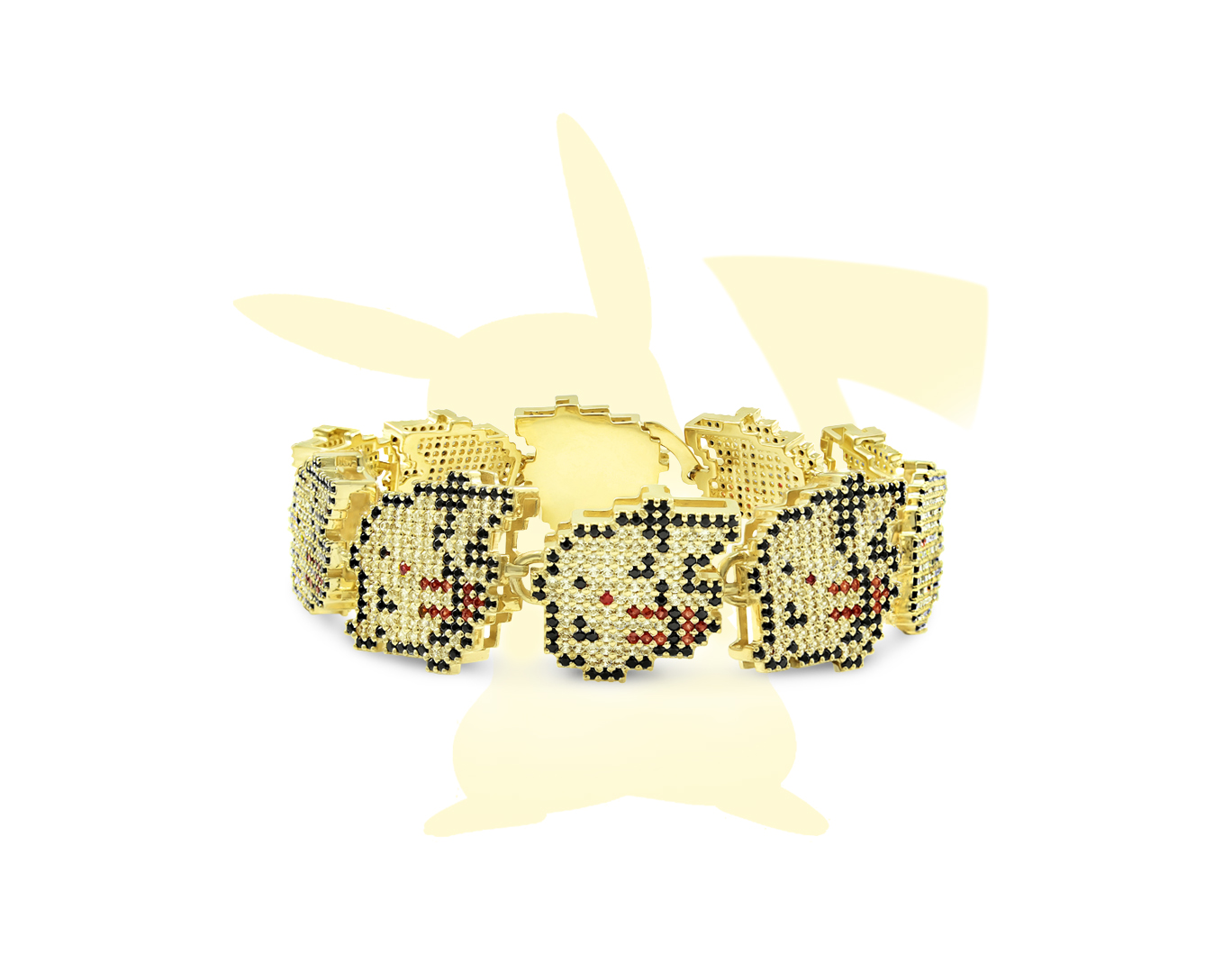 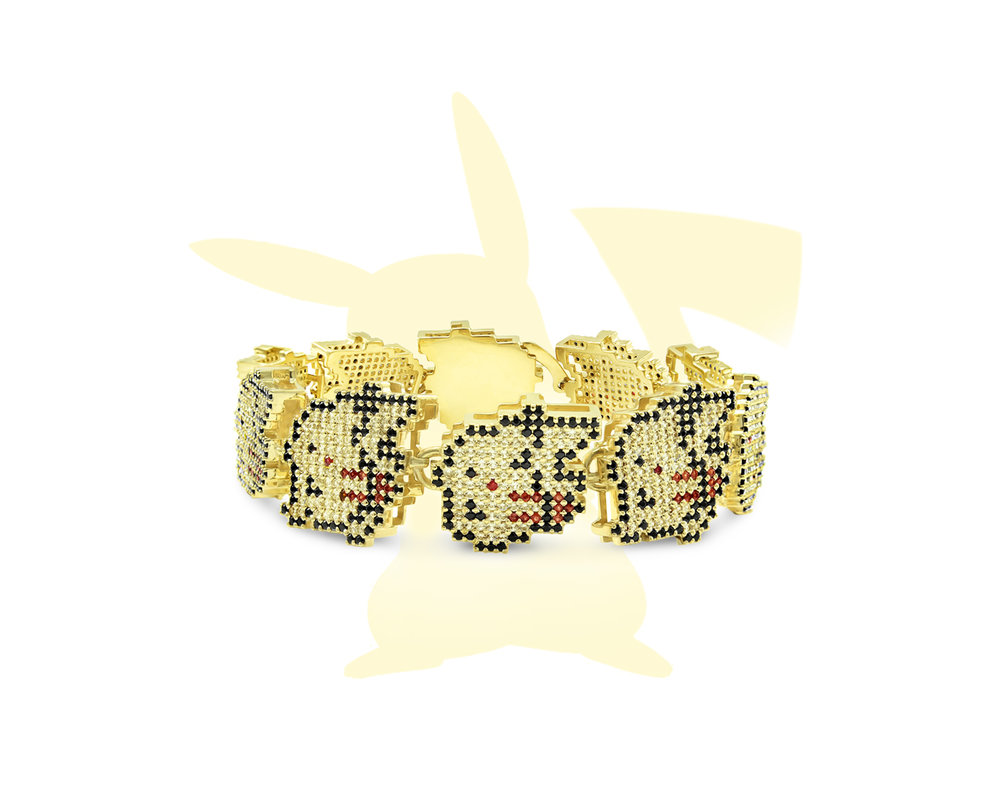 We loved working with Melissa to design this custom 14K gold and yellow sapphire Pikachuinspired bracelet.

We had previously worked with Melissaand her husband Mike to design their custom Mew and Legend of Zelda wedding rings several years ago, so when she reached out to us with her bracelet idea, we were thrilled to work together again. 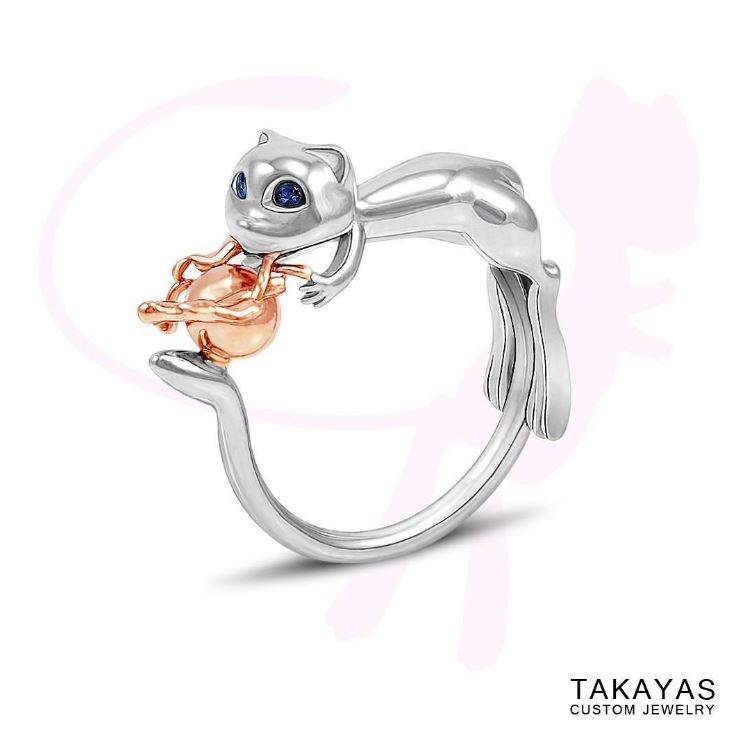 Pokemon Yellow had always been special to her because it was the first Pokemon game Melissa owned growing up, so she wanted to create a bracelet that captured the early pixel art style of the Pikachu that follows you around in the game. She sent us severalimages and animations of Pikachu’s walk cycle for reference.

Her idea was to use gemstones to mirror the individual pixels of Pikachu and alternate the poses so that it would look like Pikachu was walking.

Sourcing the stones for the bracelet was one of the most rewarding parts of the project as each stone was only 0.9 mm large.

We thought about using black diamonds for the Pikachu outline, but black diamonds are very heavy stones that wouldn’t have fit nicely in the small settings, so we used black spinel instead. Each cheek is an accent ruby.

For the brown stripes on Pikachu’s body, Takayas decided to use garnets because even though garnets are traditionally known for the deep red color, in smaller accent gem sizes, this color is less concentrated so they can take on a reddish brown color. 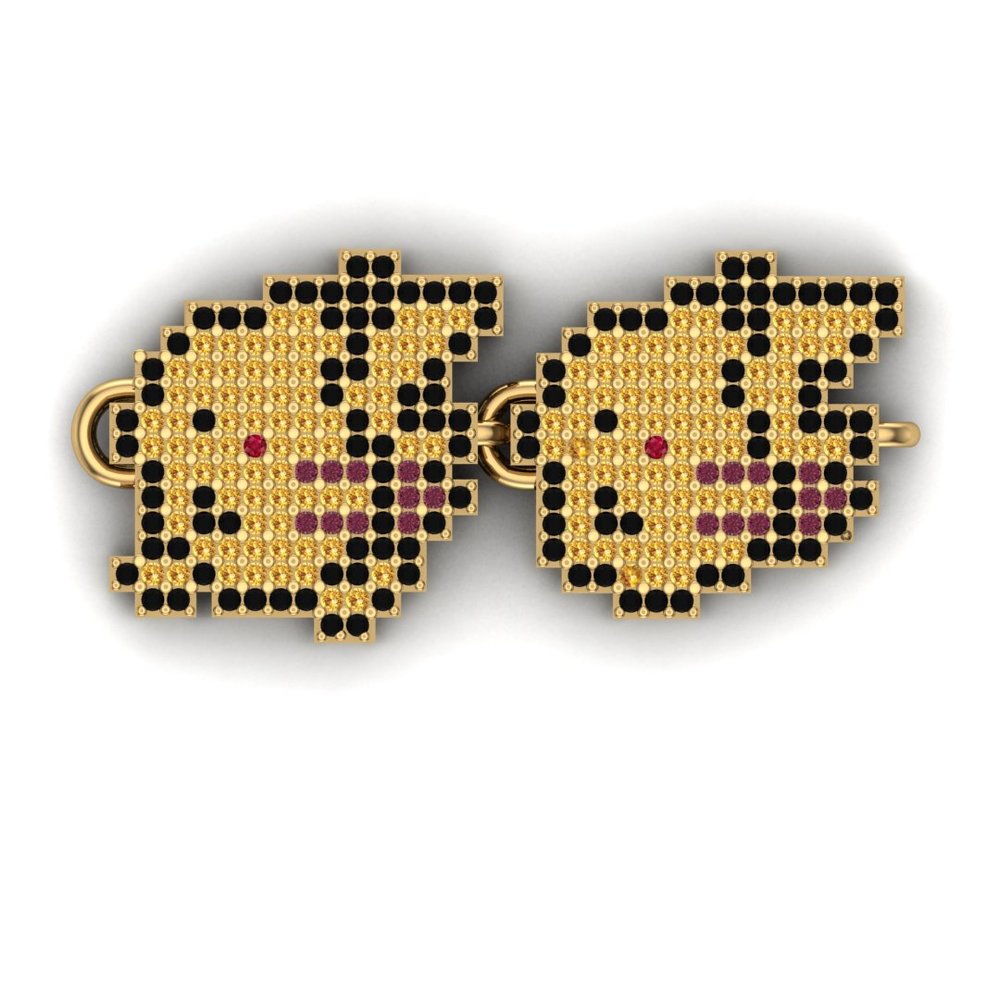 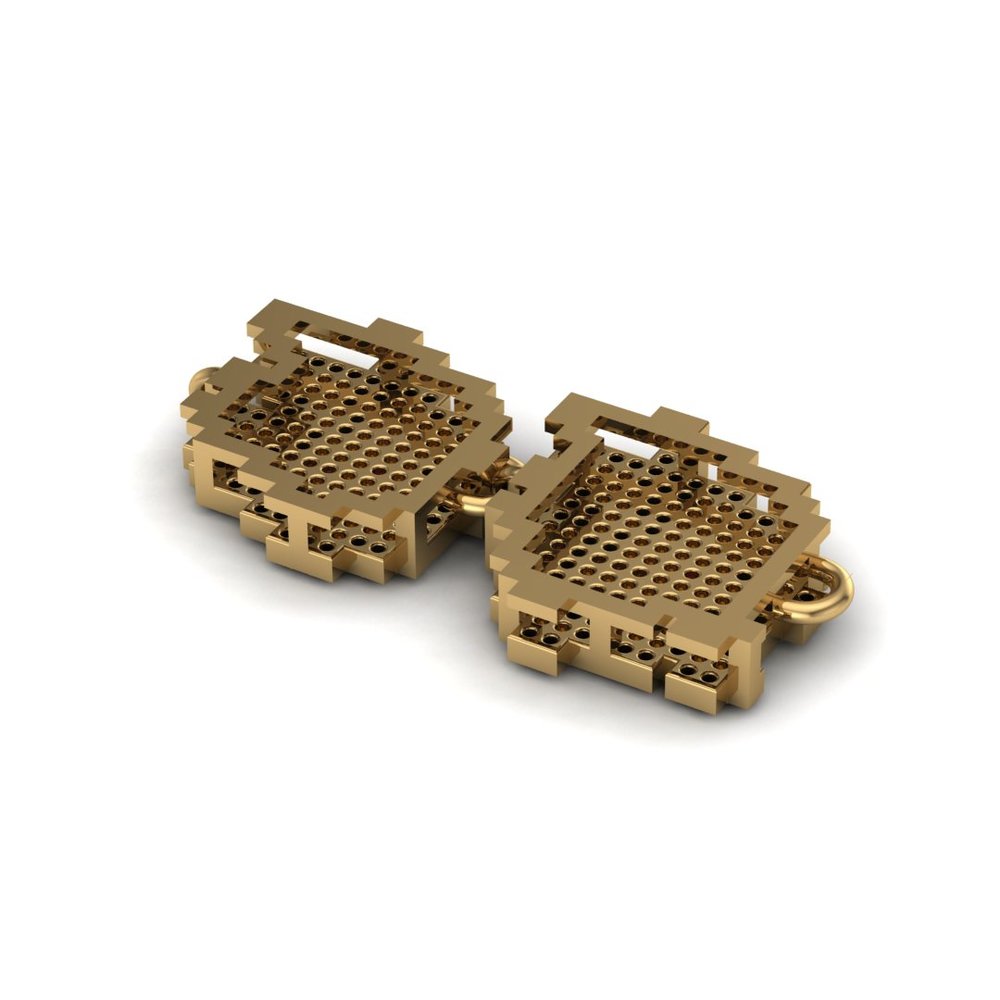 Takayas wanted the bracelet to have a little bit of weight and depth so that it would have the look and feel of a luxury bracelet, so instead of a flat piece, hebuilt each Pikachu with a little dimension.

For the clasp, he used a box clasp so that the tongue of the clasp would be hidden behind one of the Pikachus in order to preserve the uninterrupted look of Pikachu walking. 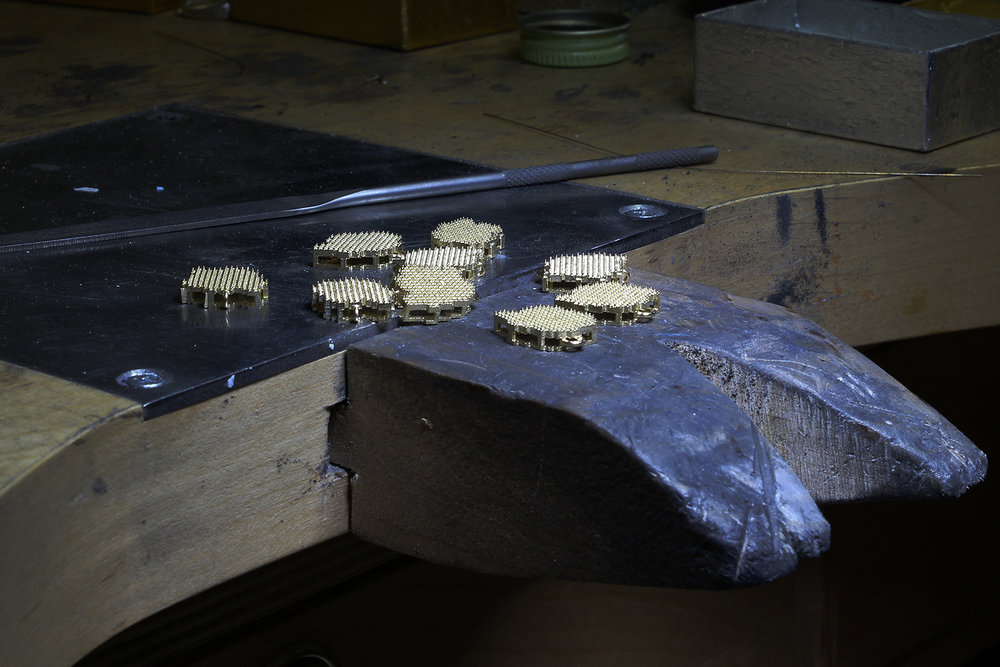 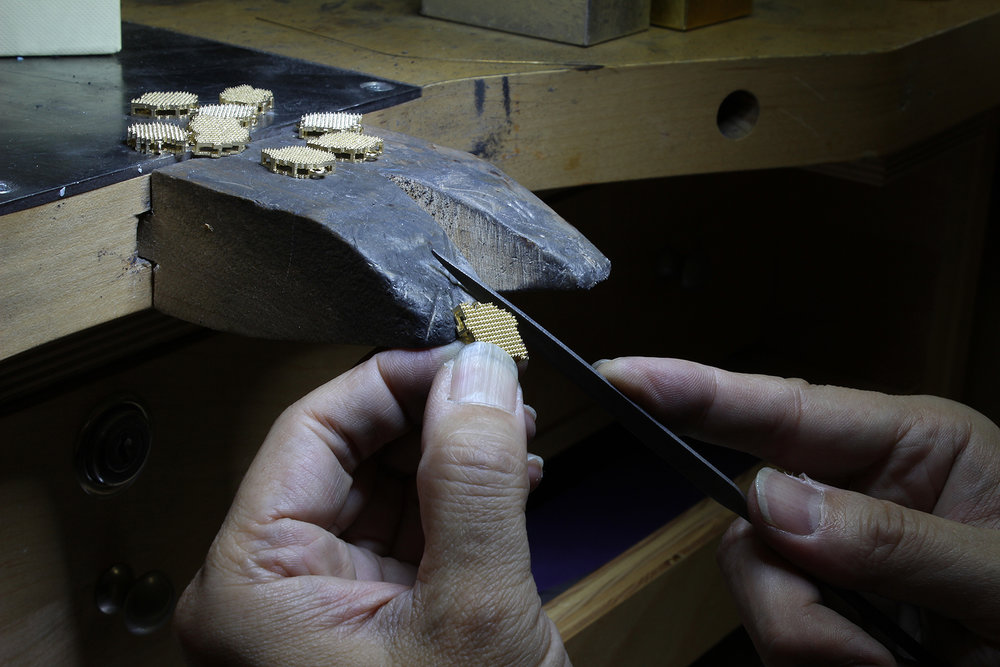 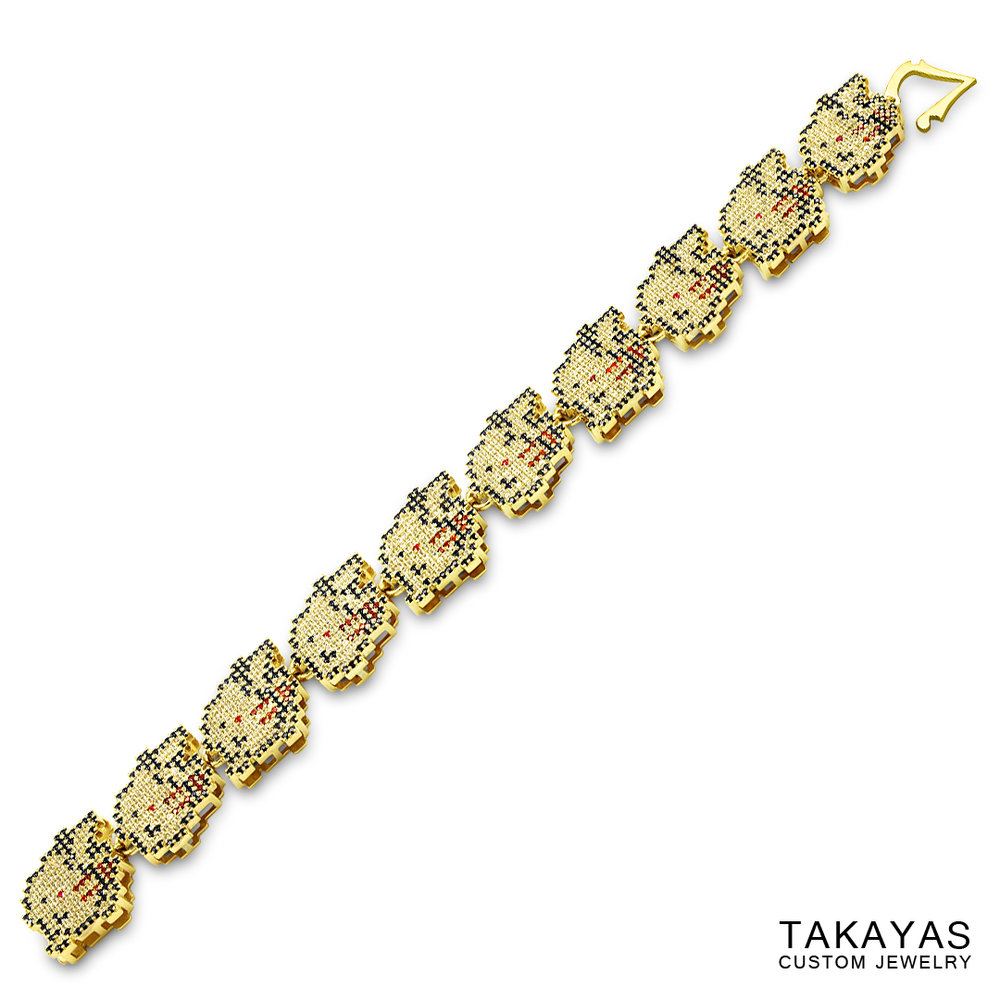 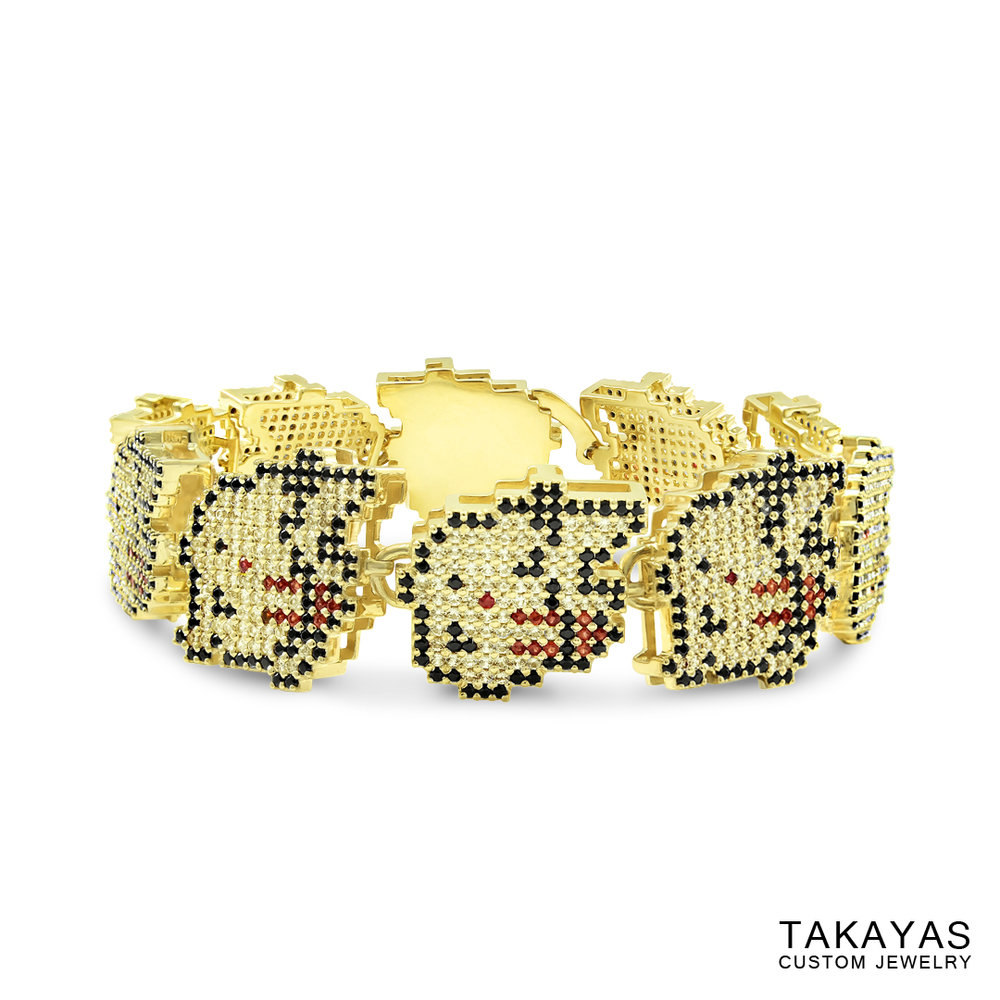 After she received her bracelet, Melissa was kind enough to send pictures andwrite about her experience working with us.

It was such a pleasure working together again to bringher idea to life! Thank you for everything. 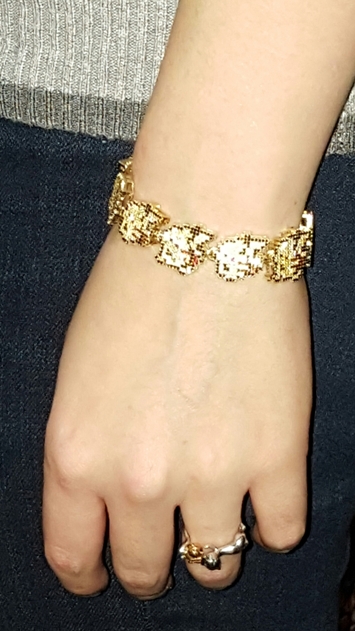 “After having our rings made by Takayas, I knew I wanted to work with him for any future jewelry projects. It actually started almost a year ago with a simple inquiry of if Takayas would take on a bracelet design, and when he said he was more than happy to, I spent some time thinking about what I wanted.

I came back to him later with the idea for doing a Pikachu bracelet, but I wanted to do pixel art style so it could still look like a tennis bracelet. I gave him reference images of the walk cycle animation for Pikachu from Pokémon Yellow, which had more meaning for me because it was the first Pokémon game I personally owned instead of borrowing from friends like I did with Red and Blue. I really liked the idea of the alternating Pikachu poses, so when the bracelet rotates or spins it might look like he’s actually walking.

Takayas was really patient and collaborative with suggesting design options with different budget ranges since a bracelet was going to be more than a ring, but after bouncing design ideas around with him I realized I didn’t want to lose the idea of pixel art look with colored stones. This was all before I officially started the project too since we needed to have an idea of what the budget was, which just shows how much Takayas cares about delivering what you envision and want for your jewelry design.

Once the project was officially started, everything went very smoothly. I didn’t have a particular time for when I needed this done, so my schedule was super flexible. He was always prompt about any changes he needed to make as well or if the time line shifted because of all the stones that needed to be cut. For example, when Takayas sent the renders, he informed me of some minor design shifts, mainly that he adjusted the size of the Pikachus and went from 12 to 10 since they were larger to have the pixelated look. My main goal was to maintain the pixel art style so I was happy he made the adjustment.”