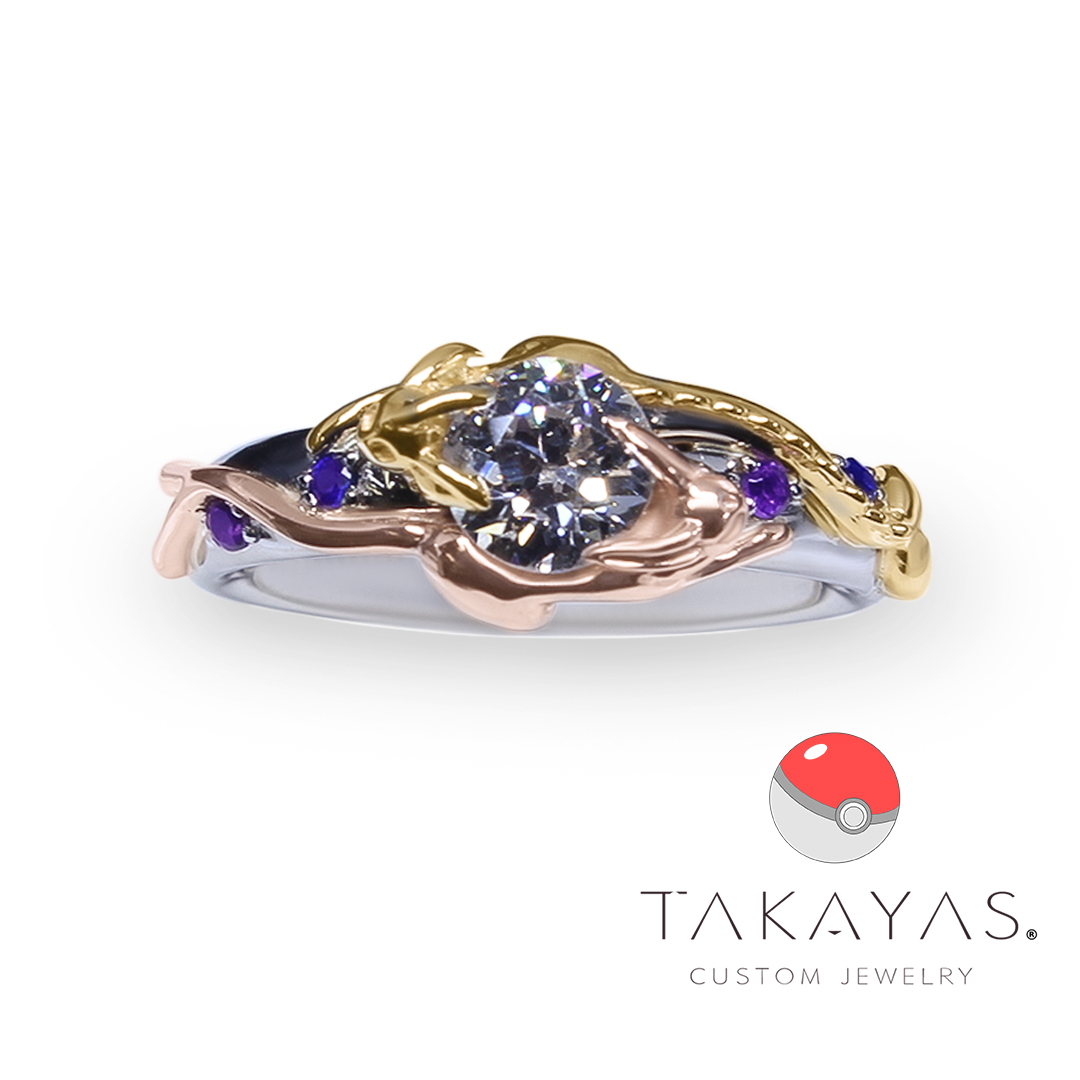 Eevee holds a special place in the heart of the Pokémon franchise. A first generation fighter, Eevee has a total of eight evolutions, more than doubling that any other species. It is revealed early on that Eevee’s unstable genetic makeup exposes itself to frequent evolutions depending on its environment, but this is by no means a weakness. In fact, Eevee’s adaptive nature is canonical within the series, so not only can Eevee exist in any game or series, they always are. That sort of dependability is hard to come by in the highly conditional nature of the game, and the parallels to real-world experiences are endless. It’s no wonder that Eevee is a favorite amongst the fandom, and why our client Emmett chose the beloved character for his engagement ring to propose to his partner, Kari, with. 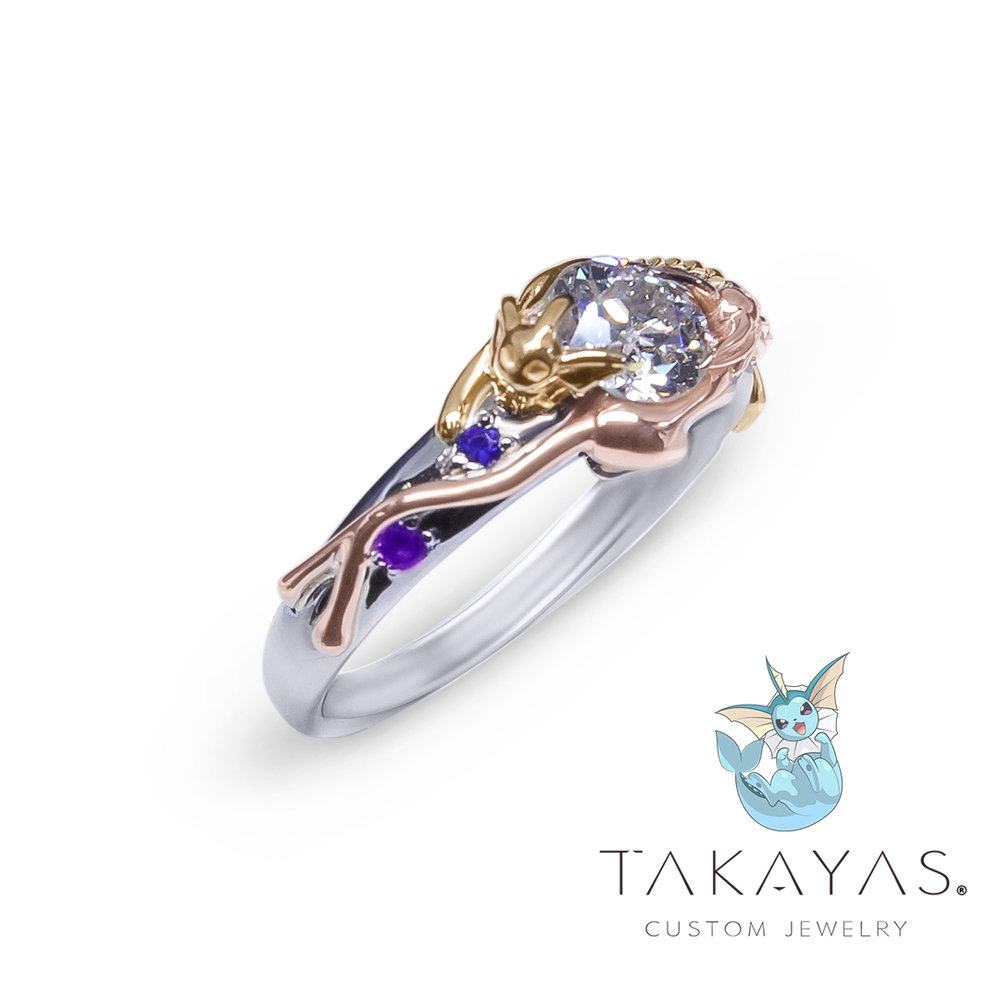 Emmett kindly shared his experience on the process with us, describing:

“The design for the ring was something I planned out two years before contacting Takayas. I knew that I didn’t want the ring that I proposed with to be from a generic design because a special moment requires a touch of something genuine. For me, it was a truly custom made ring or no ring. As for who would make the ring, my fiancé showed me the [Takayas Custom Jewelry] blog in late 2016 and after I saw the library of diverse designs I knew that Takayas would be one of the best for making a great nerdy ring for me.

My fiancé and I are both gamers and both grew up playing Pokemon a lot when we were kids. The recent Pokemon-Go craze helped revitalize our old passions and after some careful thought I knew how I wanted to design her ring. For us, our favorite Pokemon are Espeon and Vaporeon. Espeon maintains a calm serenity while Vaporeon is playfully hiding a soft smirk. Both Pokemon represent some closely held ideal qualities of ourselves and I wanted to have both of them around and supporting the love that we have for each other.

Finally, the ring was designed for a medical professional. My fiancé is a doctor and this ring needed to be designed so that if she was wearing it while working the ring wouldn’t catch onto a medical glove. The final design captured the elegance of the Pokemon without sacrificing their defined unique features. Instead, the ears hold the stone while the tails wrap around the accent stones, leading into the lower half of the ring.”

To represent each character in full, Takayas wrapped both characters around the 14k gold white band, meeting on either side of a stunning Diamond center stone, Emmett’s own. He shared, “One of the best parts of the ring is that the stone itself is the stone from my mother’s ring and my father’s grandmother before her, so the stone has been in the family for a while.” Their tails are wrapped around one another as they reach towards the ring’s accent stones, like wild Pokémon playing in the wild whilst hunting berries. “Originally I wanted to have Espeon and Vaporeon jumping around the stone of the ring,” Emmett continues, “But after seeing Takayas’ reinterpretation with having the two strictly around the ring and their ears holding the stone, I loved the change.” The accent stones used are both blue sapphires and purple amethyst to symbolize Vaporeon and Espeon respectively, their character’s emblazoned colors sitting closest to them on the ring’s surface. 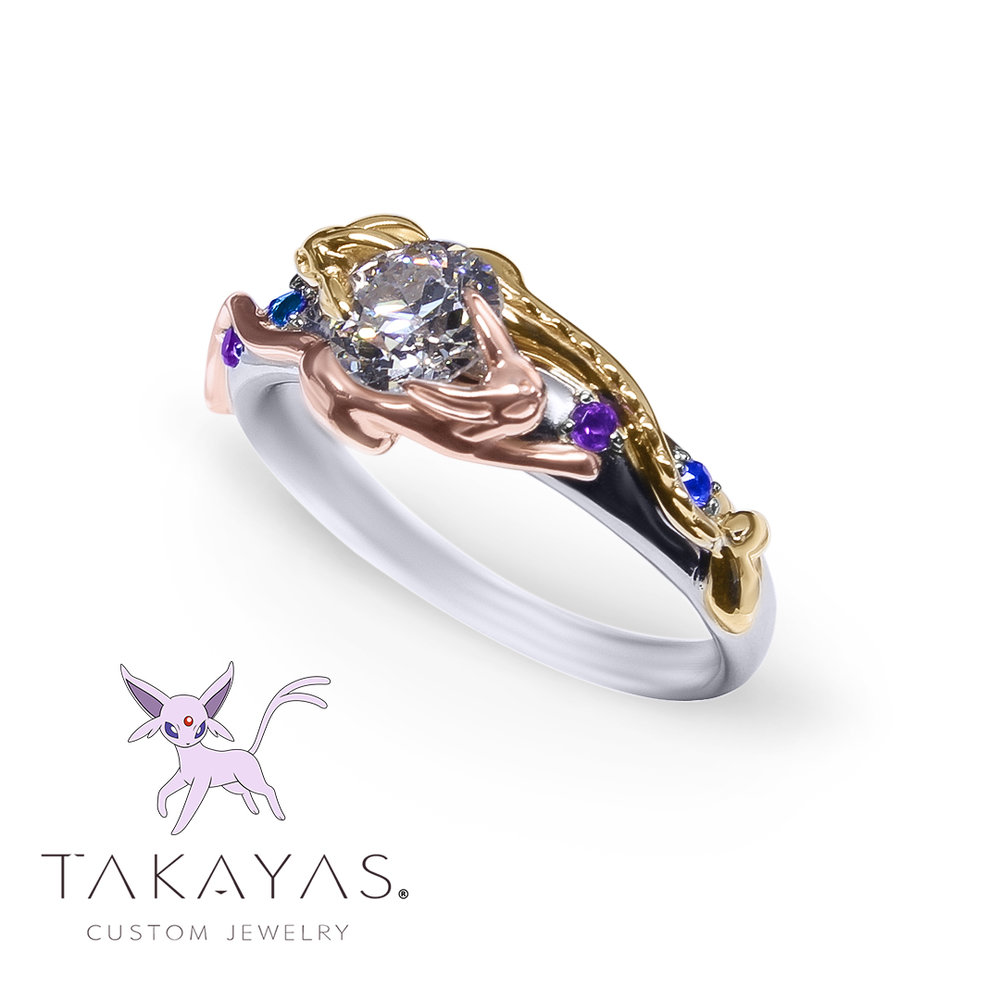 Vaporeon and Espeon, perhaps the most adorable of Eevee’s evolutions, are both powerhouses of strength and ability. A remarkable symbol for Kari, Emmett’s fiancee, to carry with her each day, and an excellent choice by her perceptive husband-to-be! Her reaction?

“My fiancé was ecstatic. I told her years ago that I knew what the ring I would propose to her would look like, but she never believed me until she saw it. Beyond having her favorite Pokemon, one of her favorite parts about the ring is that it doesn’t just represent her, but instead incorporates both of us wrapping around a symbol of our love for each other.”

A special thank you to Emmett, whom it was an honor to work with, and congratulations to Emmett and Kari!