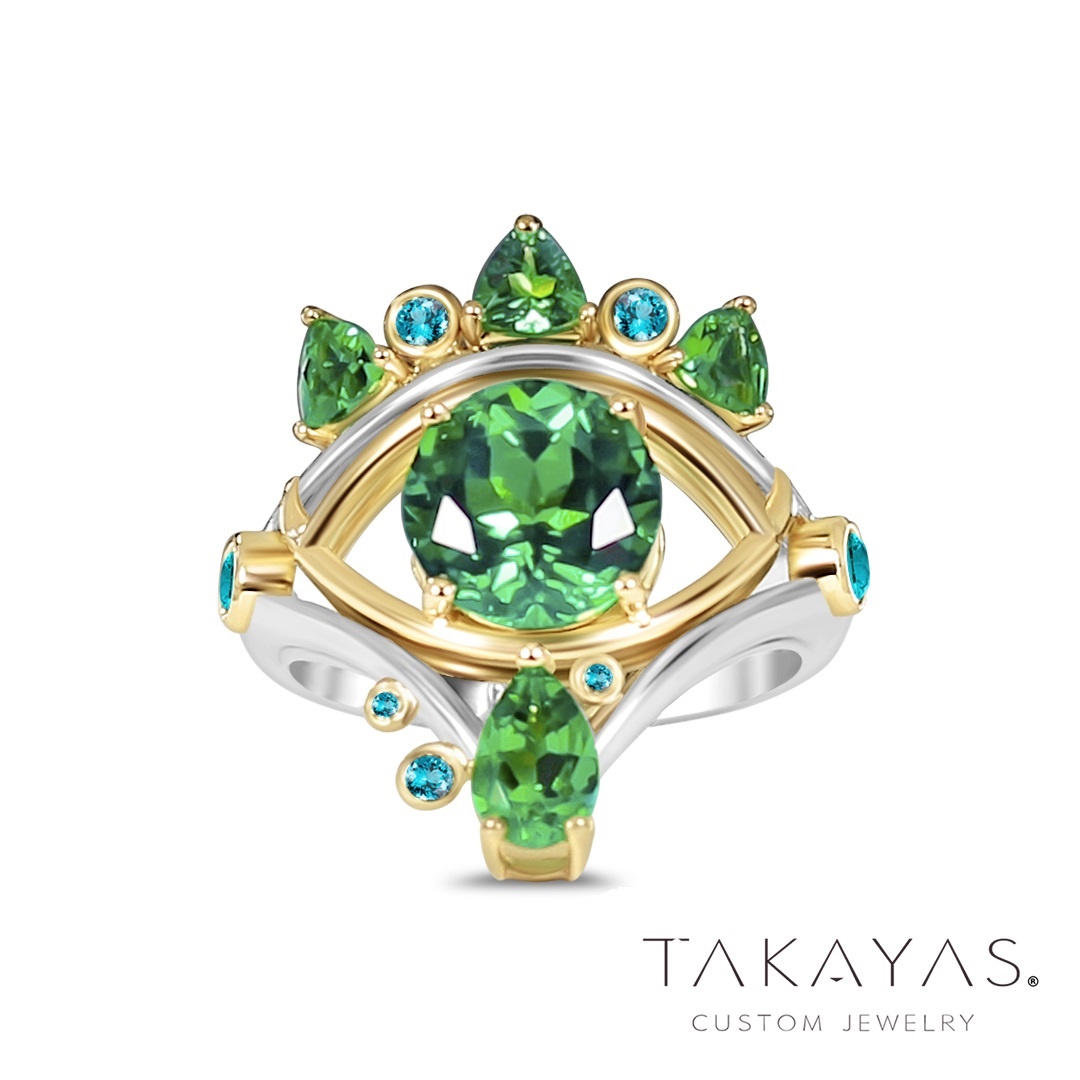 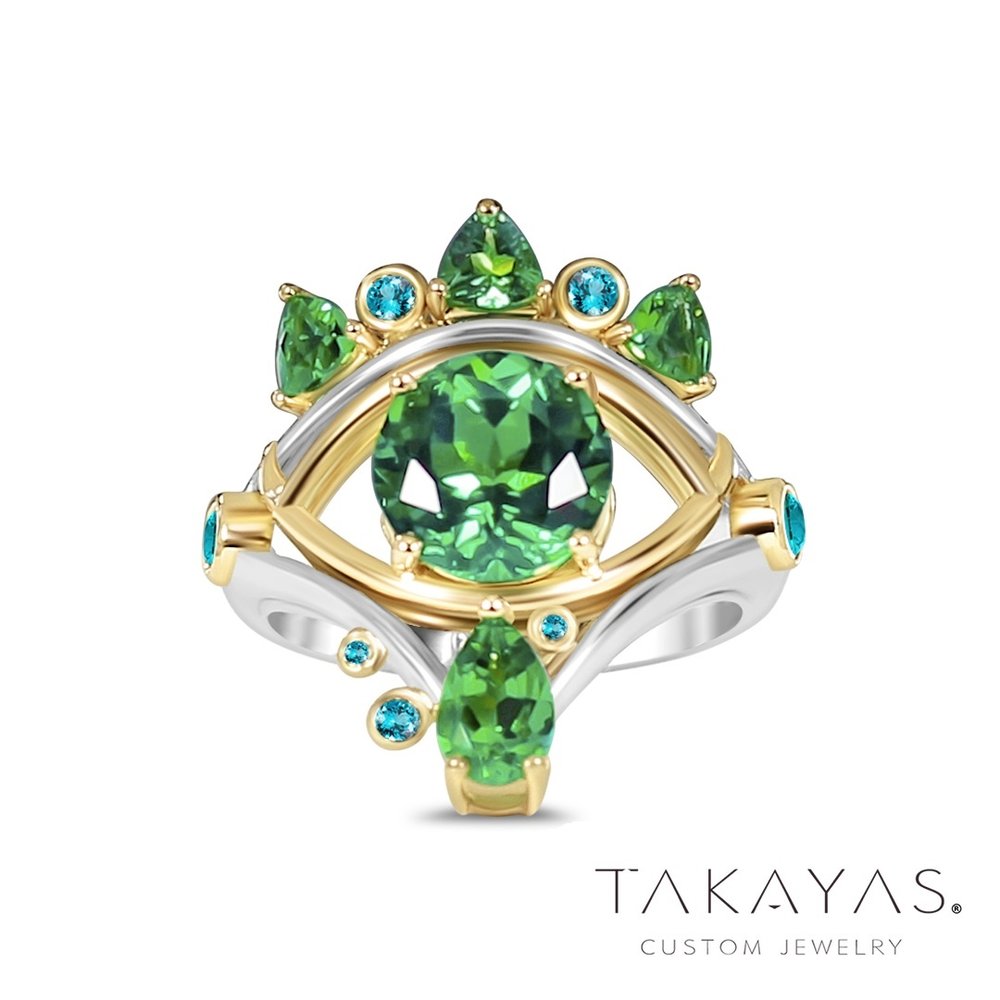 Fairy races, hidden tribes, secret creatures, magical lore – throughout the Legend of Zelda series, the rich symbolism and mythology that define the land of Hyrule constantly inspires the imagination. With their minds set on making their own artistic homage to the video game series that has meant so much to their lives together, our friends Adam and Sarah came to Takayas Custom Jewelry to craft a custom engagement ring inspired by the iconic eye symbol of the shadowy Sheikah tribe!

Although Adam and Sarah first met playing Star Wars: the Old Republic many years ago (and a couple thousand miles apart), this wonderful couple has been clocking in the hours with a different type of game lately. “Sarah loves the entire Zelda series, and has played almost every game!” Adam explained to us. “It was the first game that she ever finished on her own, and it was the spark for her love for gaming. When Nintendo released the Switch console, we both bought one, and each played Breath of the Wild side by side… for hours upon hours. Breath of the Wild re-invigorated my own love of the Zelda franchise, and really is now one of my favorite games ever!”

When Adam decided to officially ask Sarah to always adventure by his side, “I wanted to create something the person I know best would truly love.” Knowing that neither of them really believed in the “standard idea of a traditional engagement ring”, the challenge was on for Takayas to create a one-of-a-kind custom ring that was as unique as the incredible relationship it represented!

Crafted in two-tone 18K white gold and 18K yellow gold, the Sheikah tribe’s mysterious eye symbol creates a stunning centerpiece for Adam’s special engagement ring. When it came to stones, the pair chose to use beautiful lab-grown emeralds to adorn the Sheikah’s crest – “because we’re geeks and science is cool,” Adam went on to say. A deep, moody round-cut emerald center stone gazes outward as the eye’s pupil, framed on the top with matching trillion-cut emeralds that serve as the eye’s pointed lashes! A single pear-cut emerald drips from the bottom of the ring, forming the eye’s stylized teardrop. 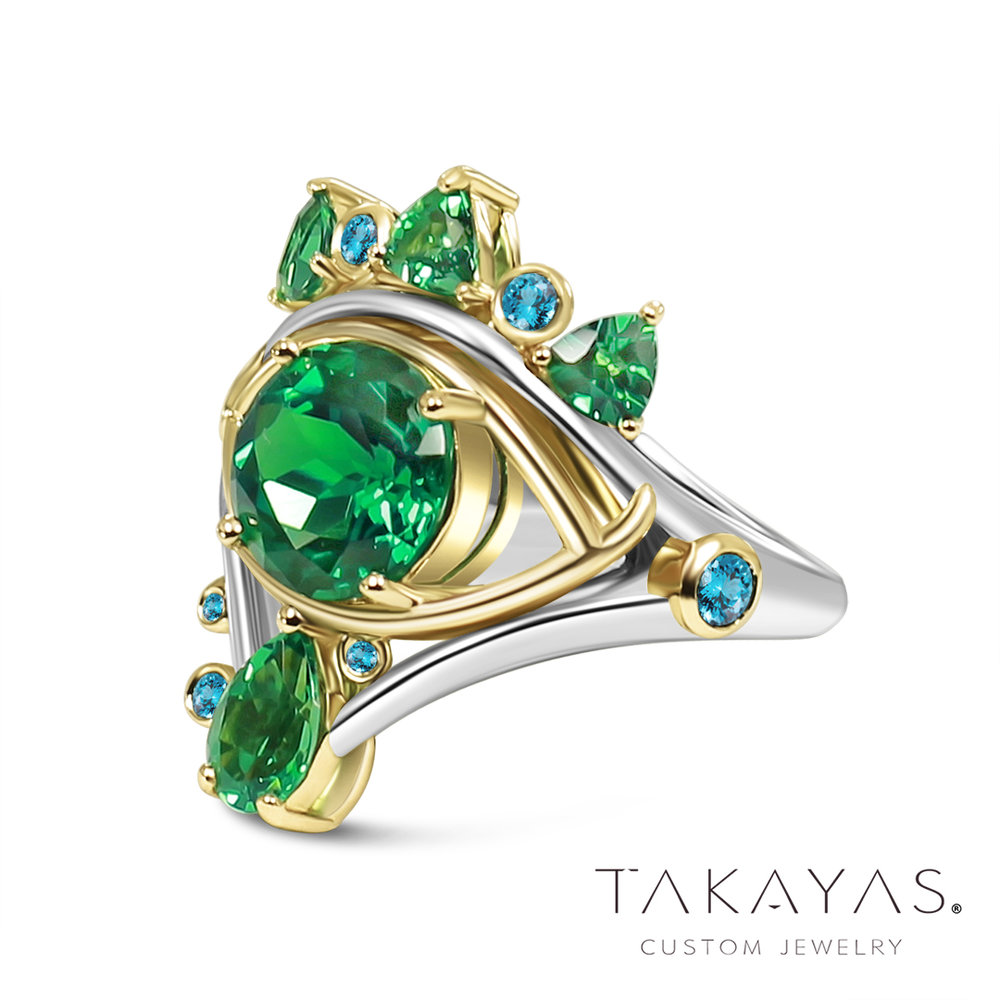 Keeping the overall look of Adam’s engagement ring gorgeous and sophisticated even as it revolves around such a distinctive theme, Takayas sculpted the intricate band with a smooth knife-edge finish. For an additional touch that reflects the Sheikah’s symbol as it particularly appears on Link’s futuristic Sheikah Slate in Breath of the Wild, seven sparkling, round-cut natural blue diamonds are held within golden bezel settings around the perimeter of the band.

As we worked together through the many personal sketches, pictures, and bits of information that Adam and Sarah first presented to us for their special piece, they were delighted by how Takayas transformed their ideas into an engagement ring that genuinely represented the things they loved. “Takayas was very good at gently steering us to commit to design decisions that we really wanted, minimizing our indecision,” Adam remarked. “At the same time, he was very willing to listen to our ideas through the process.” To say that Adam and Sarah were thrilled about their final design would be a bit of an understatement!

While Sarah had been on-board for the creation process of her ring, however, she didn’t know that Adam had arranged for the finished piece to be delivered by a friend to their home. “I proposed to her on a hike in the Santa Monica Mountains with our dogs present for the big moment, along with her sister and brother-in-law,” he said. “It couldn’t have been any more perfect.Although I had to carry the ring back down the hike because she was afraid of getting it dirty! She is in love with it – it is ‘perfect’ in her words.” 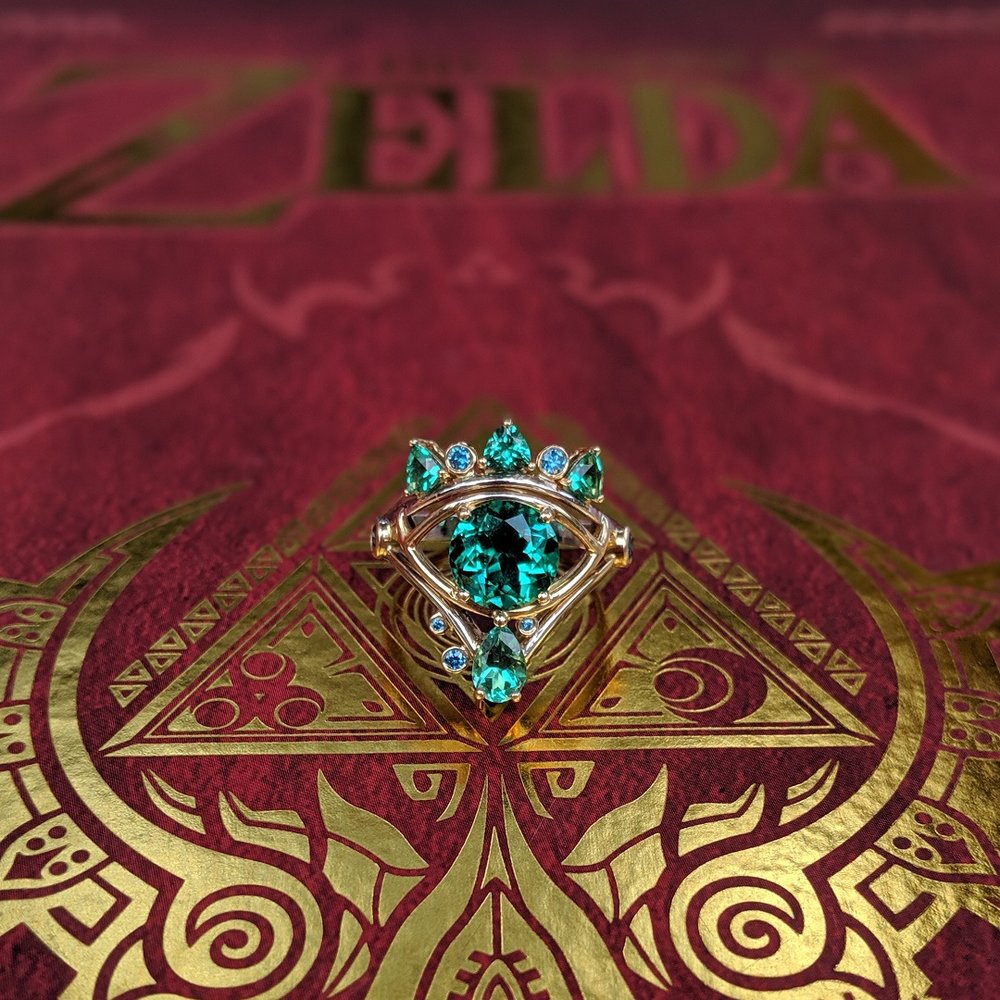 Thank you, Adam and Sarah, for giving us the opportunity to create such a phenomenal Legend of Zelda inspired engagement ring that truly stands in a class of its own. We wish you a lifetime of love as you continue your escapades together – and we hope that one day, we might have the opportunity to bring your fantastic visions to life again in another piece of custom jewelry that’s just for you!