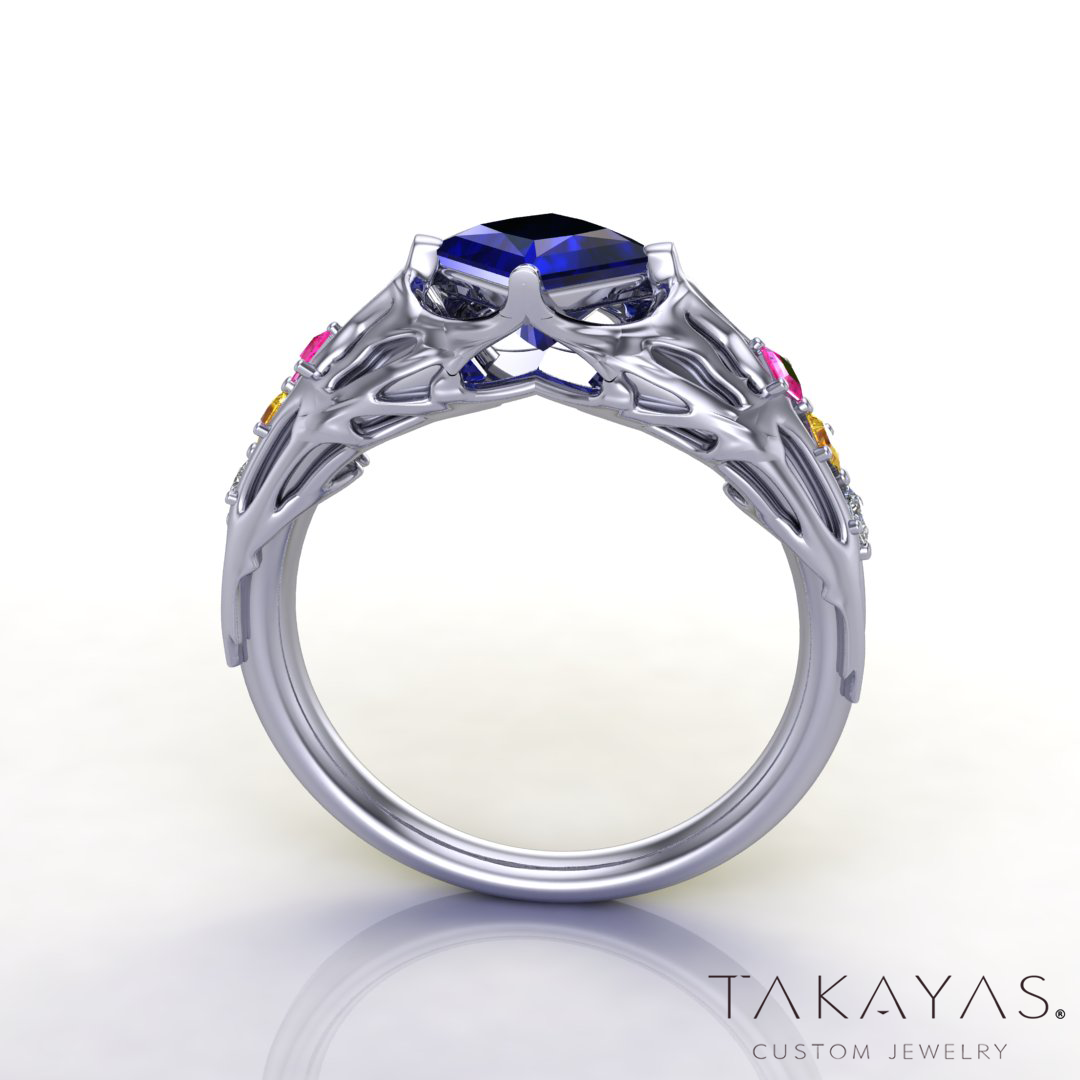 Sometimes when we meet another person, the sense of connection we feel is immediate and strong – striking us like a bolt of lightning. Jason and his now-fiancée were initially just friendly acquaintances, but when they took the time to get to know each other a little better, love happened before they even knew it. “We knew we wanted to be together,” Jason said. “It was all the right time and the right place.”

As the couple first began discussing marriage, they took on their own respective searches for the perfect ring… and coincidentally both ended up on the Takayas Custom Jewelry website! For a pair of avid gamers enamored with statement-making, one-of-a-kind custom jewelry pieces, they knew that reaching out to Takayas was the only choice to craft their own stunning engagement ring.

“My fiancée is a major Final Fantasy fan,” Jason told us. When the thirteenth installment in the mainline series hit shelves, she felt a deep affinity with Lightning, the game’s mysterious and cool-headed protagonist. Jason once gifted his fiancée with a necklace inspired by the lightning bolt-shaped pendant Lightning wore in the original Final Fantasy XIII – but when Lightning showed up with a different motif incorporated into her armor in the sequel Lightning Returns, and when the time came that Jason knew he wanted to ask his lovely partner to stay by his side forever, he decided to merge both designs into a single engagement ring to symbolize the evolution of their relationship! 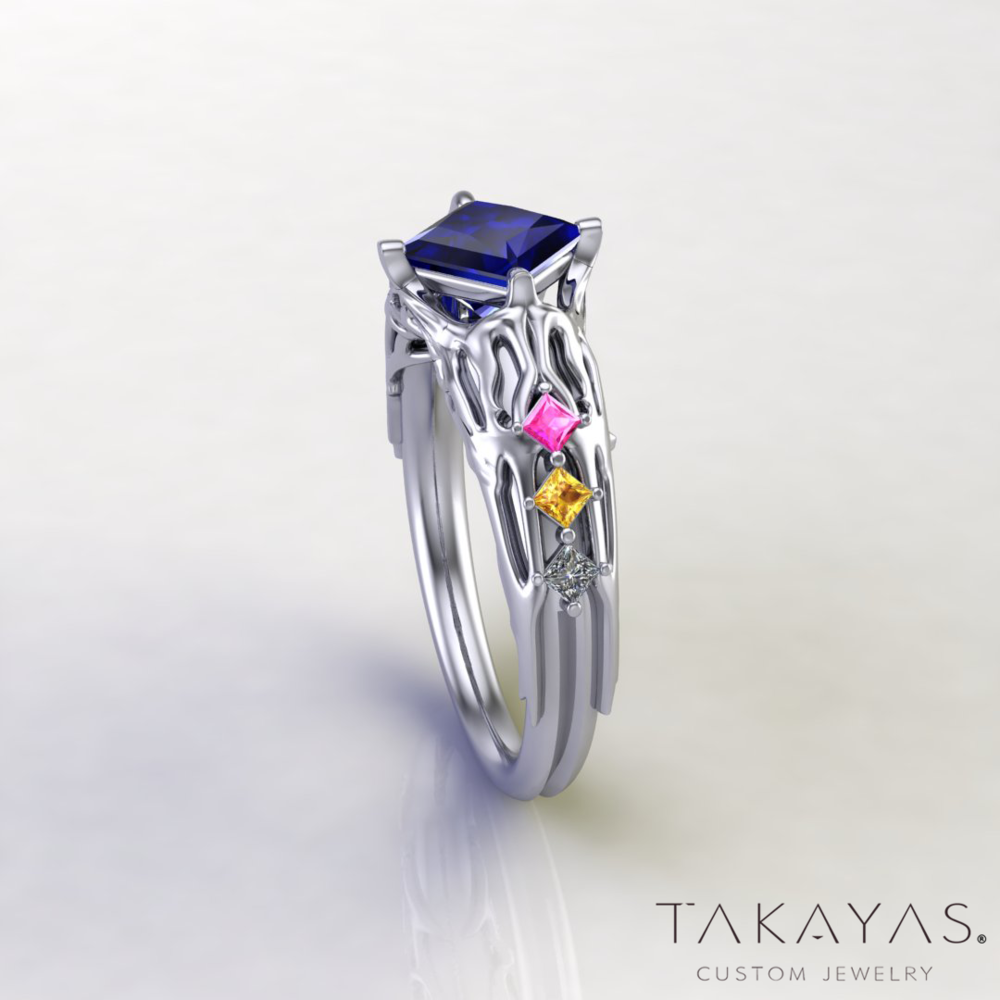 Whereas Lightning’s pendant is sharp and geometric in style, the motif on her armor in Lightning Returns has an organic, flowing shape. Combining two radically different designs into a single piece of jewelry posed an exciting challenge for Takayas! In crafting Jason’s 14K white gold engagement ring, Takayas used the intricate detailing featured in Lightning’s armor motif to form the ring’s shoulders, which swoop dramatically upwards to hold a shining princess-cut blue sapphire centerpiece.

To reflect the angular gems that make up Lightning’s pendant, square-cut pink, yellow, and white sapphire accent stones glitter along the length of the band. The overall effect is totally seamless – two distinct design styles synchronized into one gorgeous piece, suitable for the finger of any Savior of Souls! 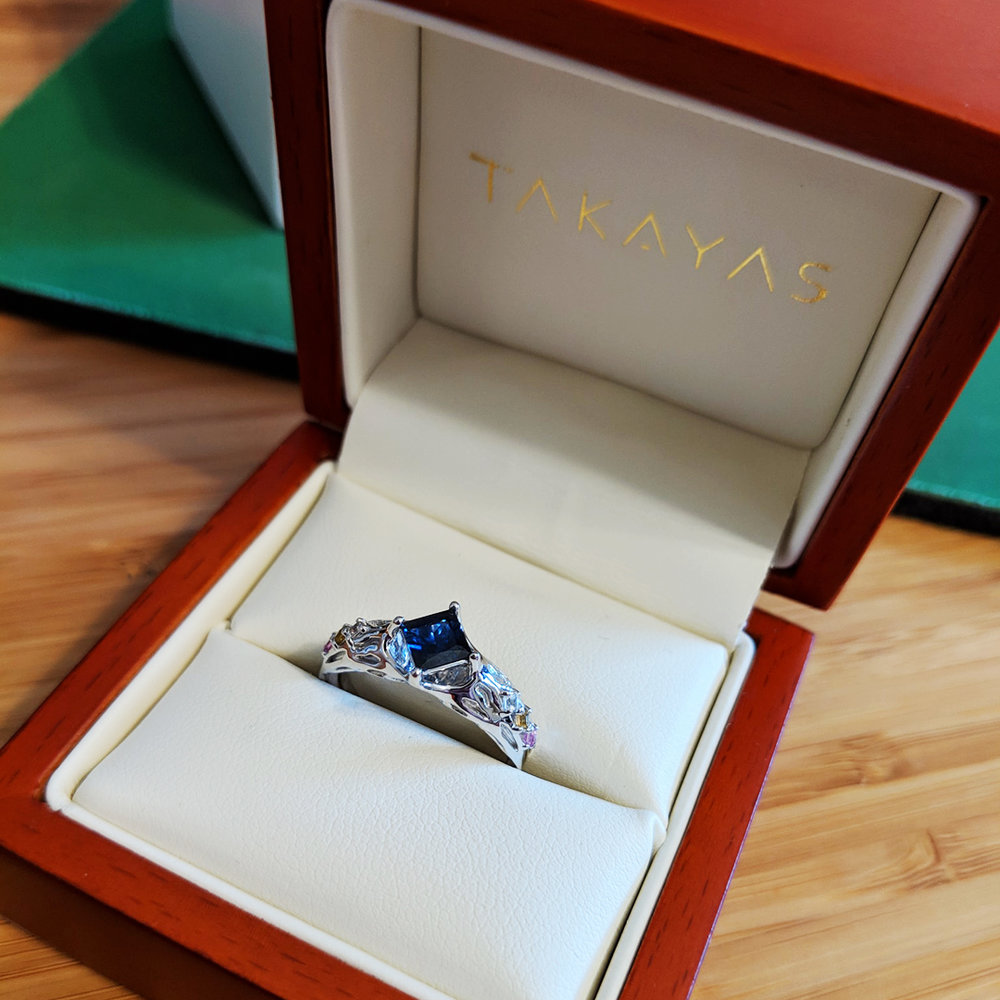 Jason was utterly fascinated with the amazing engagement ring Takayas created just for them. “Takayas’ attention to detail is astounding,” he said. “He takes reference imagery and turns it into a masterpiece of artwork.” As for the lucky recipient herself, Jason’s fiancée was completely stunned when Jason secretly rigged a Christmas gift exchange with friends to pop the question at the very end! “She was frozen in excitement and shock. She and everyone else loved the ring.”

Thank you, Jason, for inviting us to create an extraordinary engagement ring inspired by the powerful character who means so much to the woman you love. Here’s wishing that the beautiful bond you share continues to deepen as you head into your new lives together – and that as you face the world hand-in-hand, every day looks bright and new, as if illuminated by lightning!