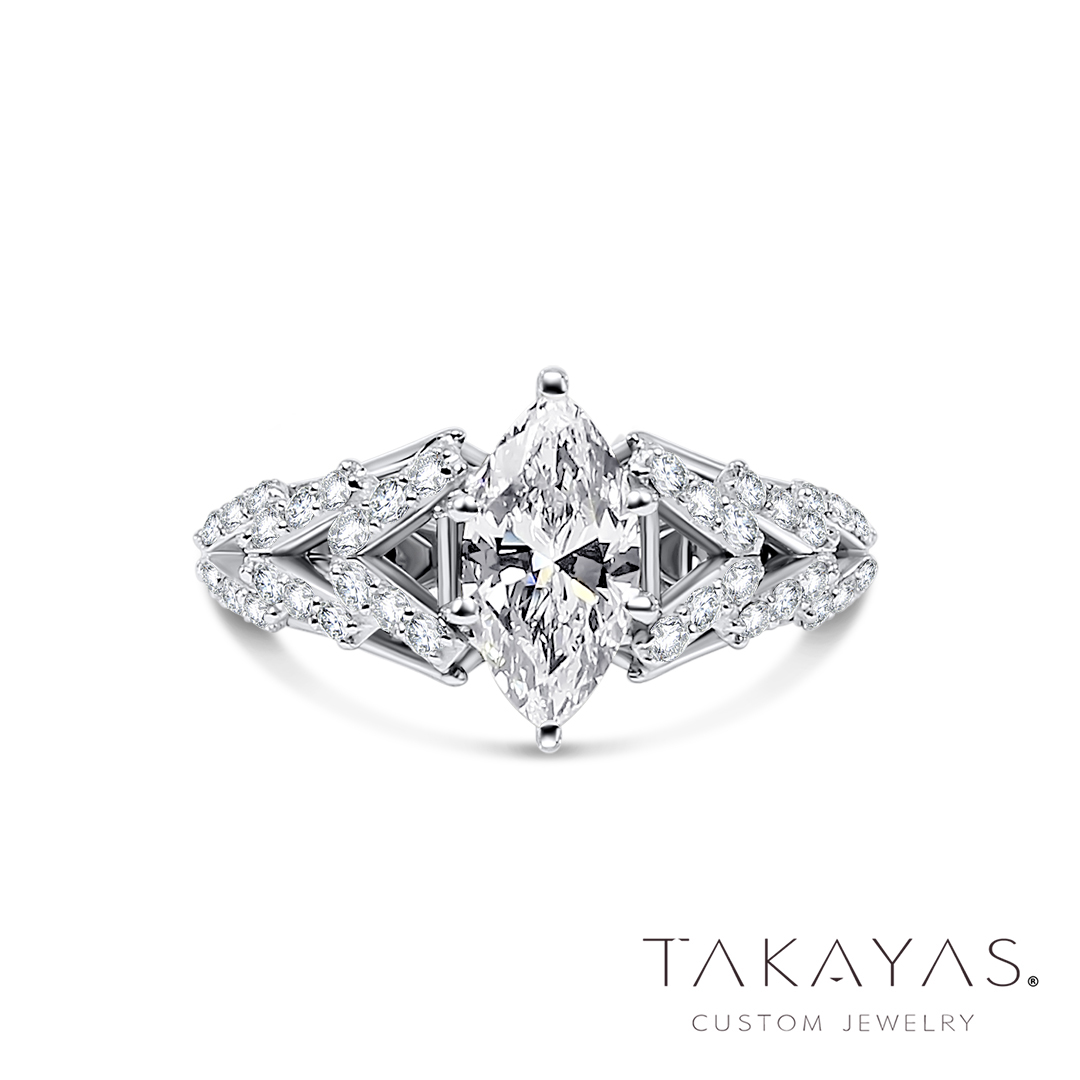 In this day and age, love stories don’t need to be confined to the one-dimensional. Some couples meet, fall in love, and spend their lives together not just here on the Earth we know, but also as Guardians of the Earth of another universe – and beyond! Inspired by the video game series Destiny, Dominic came to Takayas Custom Jewelry to craft a custom engagement ring that paid homage to the intergalactic adventures he and his girlfriend share. 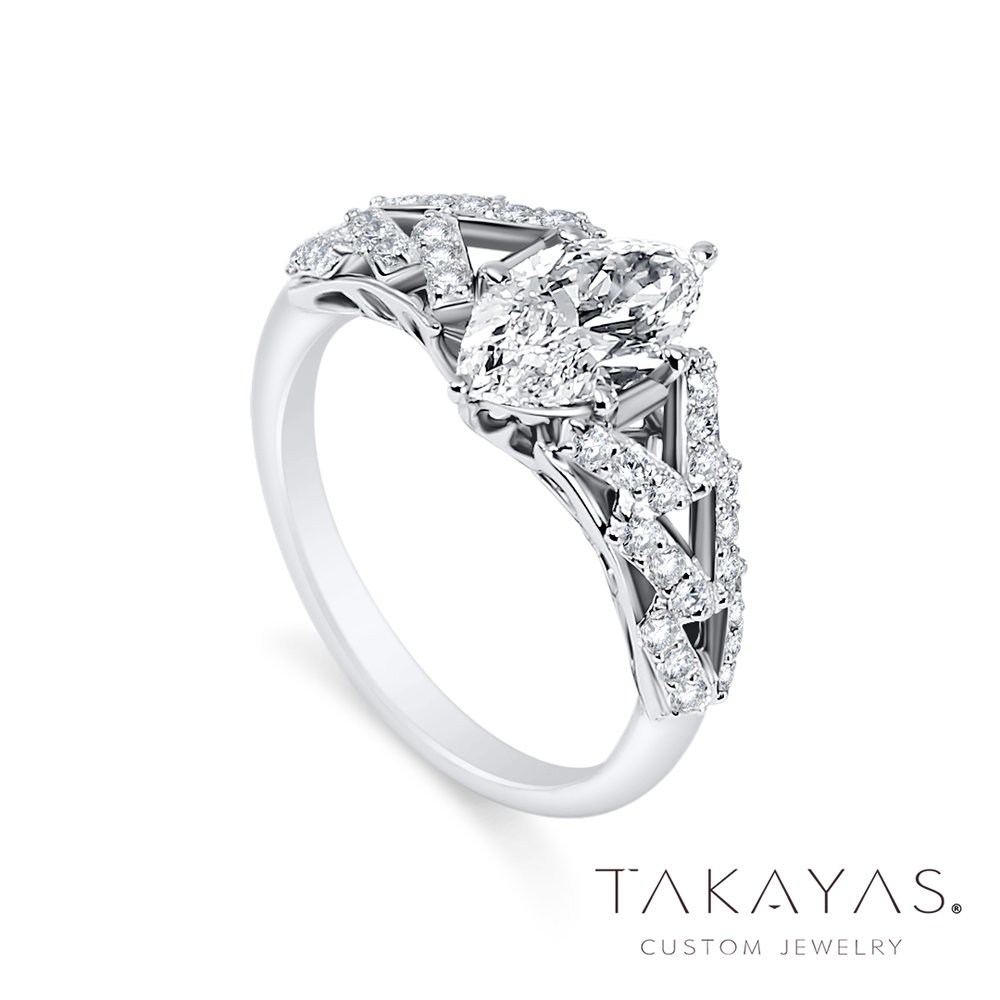 Throughout their escapades across the Solar System, Dominic and his girlfriend love to take on the many worlds of Destiny as two particular classes – the Hunter and the Titan. As daring, trailblazing masters of the frontier, Takayas knew that the striking class emblem of the Hunter would make a particularly powerful statement as the focal point for their incredible engagement ring! Sculpted in sleek, white platinum, the distinct arches of the Hunter emblem shine with glittering diamond accent stones, radiating from either side of a spectacular marquise-cut center diamond.

Instantly recognizable to any Destiny fan, the patterns of the Hunter also serve to create a compelling, modern design element that highlights the luxury and sophistication of their beautiful ring. Underneath the ring’s shoulders, the flowing, organic shapes of the tree-like motifs that emblazon the legendary armor of the noble Iron Lords reach gently upward along the side-gallery, adding depth and visual interest through pockets of negative space. 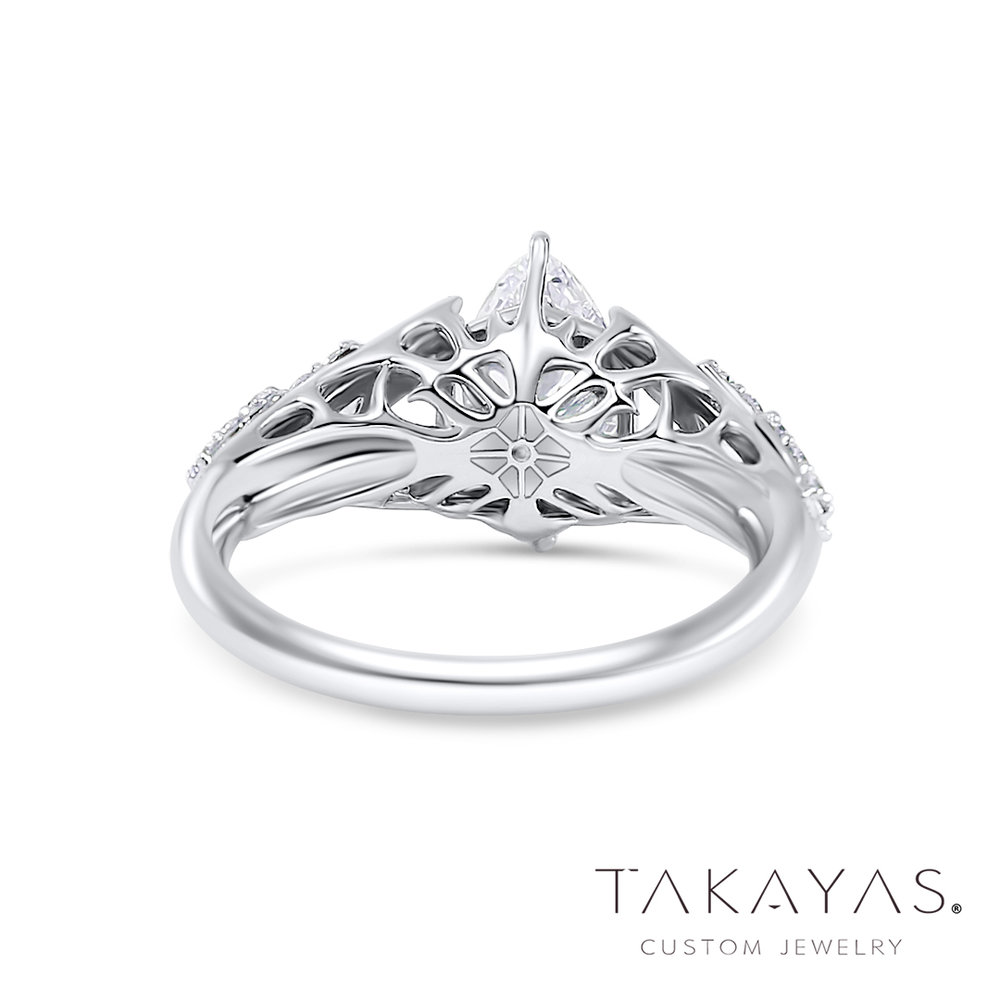 Wherever Dominic’s partner goes in her travels as a Guardian, she will always have her own robot drone close at hand to watch over and support her. Carved into the underside of the setting, a hidden symbol of the Ghosts creates a special surprise! To add another secret, heartfelt touch to the ring that holds so much meaning for this wonderful couple, Takayas fashioned the setting into the shape of the class emblem of the Titans – forever steadfast and sure, ready to lend their noble strength to uphold the precious diamond that symbolizes the love they share.

“The design and layout is beautiful,” Dominic enthused to us after first seeing his unique design. When he went on to show off his ring to his friends, even they raved that “Whoever made this is a true artist!” Such wonderful praise in mind, however, there was still one person left whose thoughts would matter the most of all – those of Dominic’s girlfriend. When the time came to pop the big question to the person he loved, Dominic and his friends hatched a plan to create a one-of-a-kind proposal she would never forget! 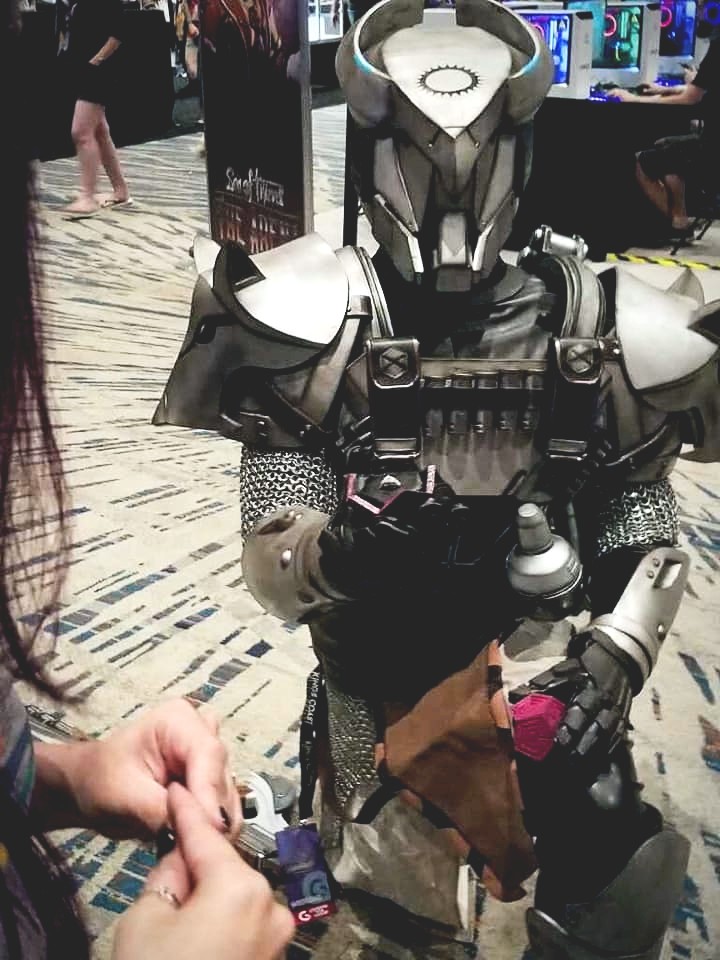 “This was quite the surprise to me, and to be honest it still is,” Dominic’s girlfriend would later explain to us after the event. During their visit to a convention, Dominic and a friend momentarily slipped away from the group with the reasoning that he had to drop off the artwork he had purchased at home. In the meantime, their other friends entertained his girlfriend, taking her along to snap a few pictures with one particular cosplayer they came across who was decked out in a nostalgic set of armor from the first Destiny game.

During their photos together, Dominic’s girlfriend noticed the friend who had left along with him a little while ago. Before she knew it, the well-dressed cosplayer was down on one knee! Pulling the helmet off, Dominic procured the beautiful Destiny-themed ring box he had crafted himself and cracked it open to reveal his custom engagement ring – and after the initial moment of shock, his girlfriend excitedly pulled him into her arms.

“As to my thoughts on the ring: I love it,” Dominic’s now-fiancée exclaimed to us. “I love how Takayas incorporated elements of the game without making it too obvious. Anyone that knows about Destiny can see them. Those who are not familiar with the game are still amazed by the design. Thank you so much for all your work. I can’t believe this was a secret in the making for months!” 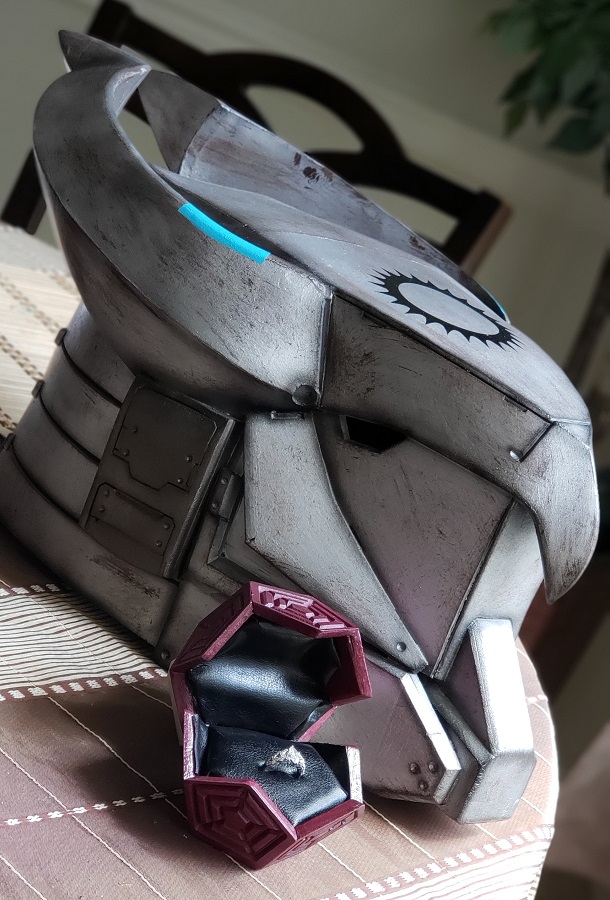 Thank you, Dominic, for bringing such an extraordinary idea to our studio, inspired by a video game series you and your fiancée hold so close to your hearts. Here’s to endless years of joy and love together, throughout all kinds of adventures across time and space!