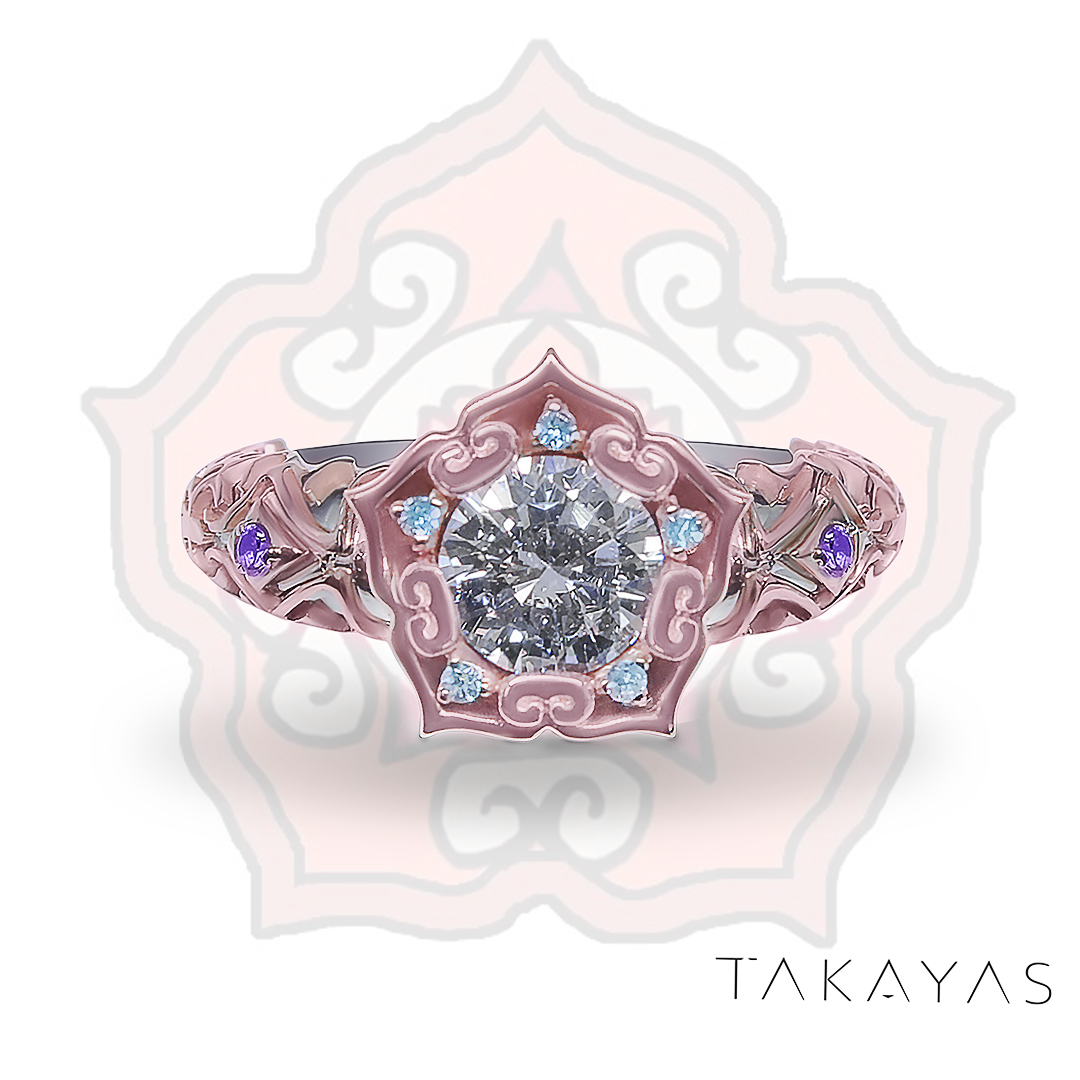 When Aya reached out to us to create an engagement ring for her girlfriend (now fiancée) Holly, she said that she wanted the ring to “contain memories of her favorite things.” And what better way to do that then to incorporate Holly’s two favorite video game heroines, Yuna from Final Fantasy X and Princess Zelda from Legend of Zelda.

The intricate flower bezel setting for the 0.75 ct. diamond is based on the hibiscus from Yuna’s obijime. While the rose gold pattern overlaid on the shank of the ring is inspired by the winged triforce / Hylian crest tapestry Princess Zelda wears over her skirt. Since Aya admired the design of the cactaurs hidden in the under gallery of our Final Fantasy XIII-2 Lightning and Cactuar Wedding Band, two moogles were placed on the inside of the band for an extra added Final Fantasy touch. Finally, since Holly’s favorite colors are light blue and purple, Takayas finished the design by adding tiny light blue topaz gems in the flower setting and a small amethyst in each triforce. 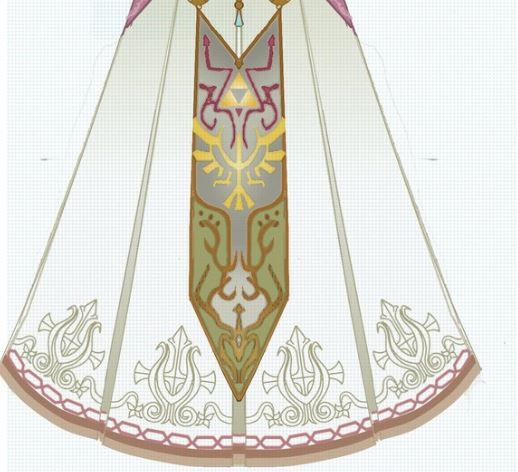 When we presented the CAD renders to Aya she excalimed, ” Wow!!! This is absolutely gorgeous!!! I am amazed at Takayas for the quickness and yet efficient work. Honestly I thought I might have ended up wanting to make changes on the first renders shown, but I have absolutely nothing. My heart is definitely set on this, and I know for a fact when presented to Holly, she will cry tears of joy for months!” 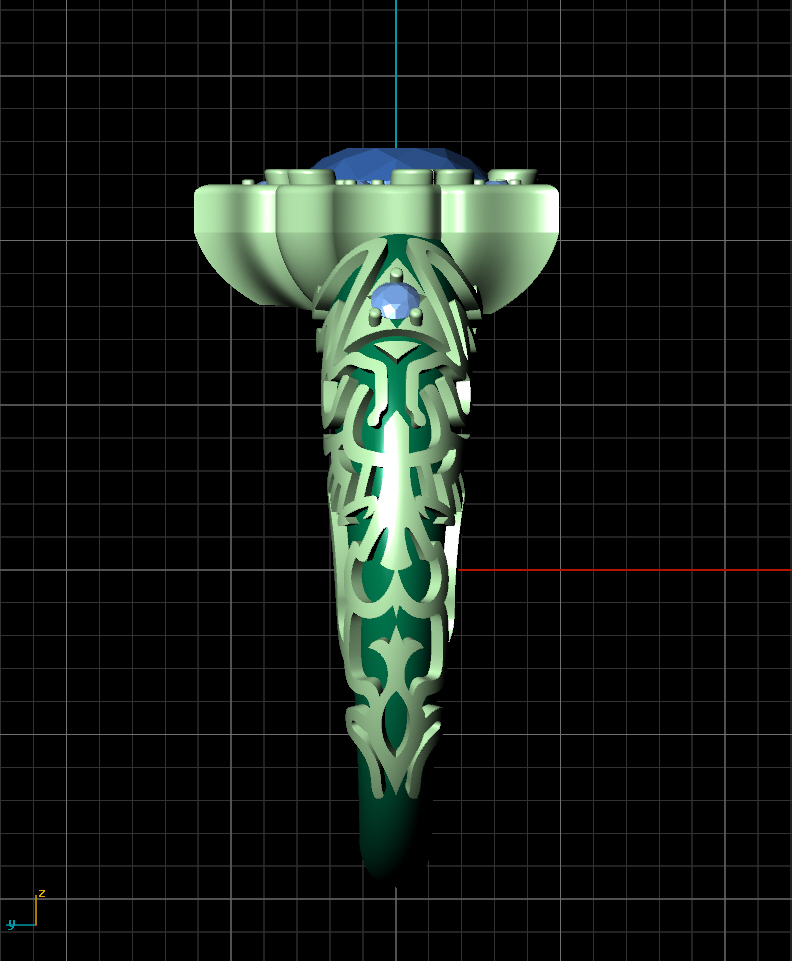 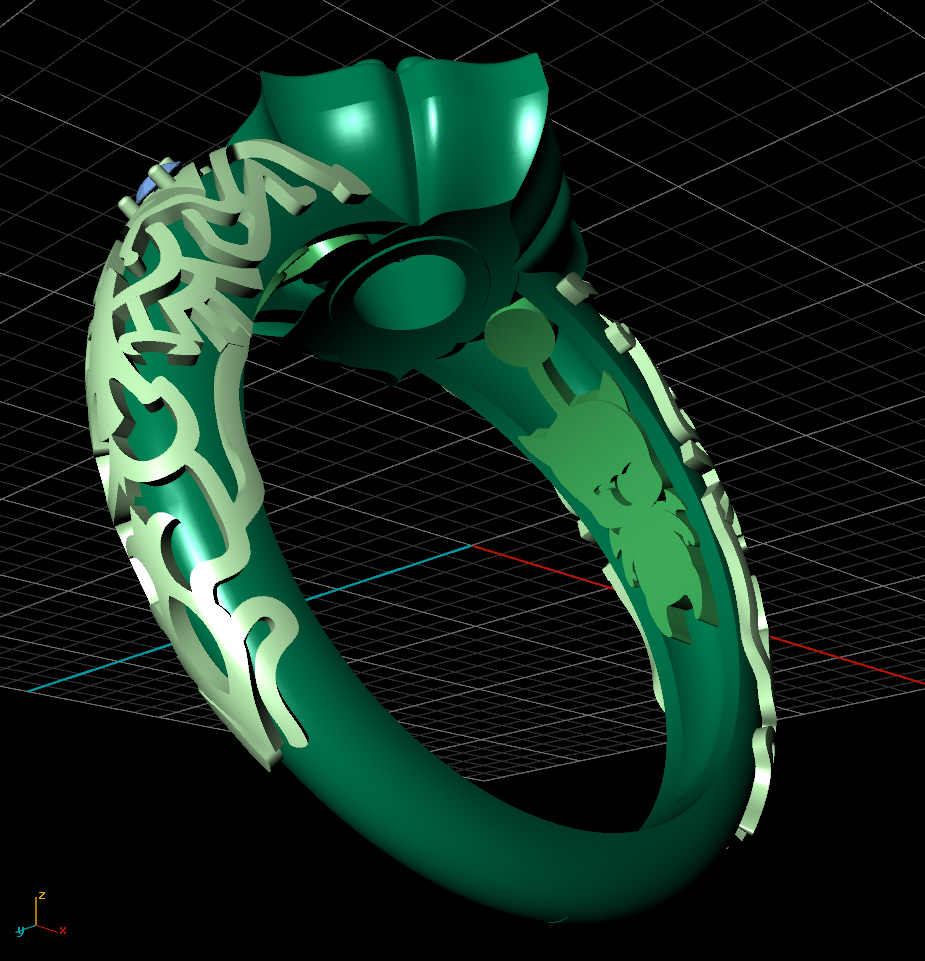 And if the careful and thoughtful design of the ring hasn’t brought you to tears already, check out Aya’s proposal story:

“I brought Holly to the beautiful Japanese Gardens at Downtown Houston, Hermann Park, where we took a stroll through, and admired the gorgeous scenery on a perfect Friday evening.

A close friend of mine had an area set up on some rocks, where I had a shirt laying down on one rock in the middle in particular that, interestingly enough, looked just like a pedestal. The shirt was later put in a folded fashion like a cloth “Houston Police Wife”, as I am a police officer for the city of Houston, and on top of that laid a small rectangular mirror. On top of the mirror was placed a gorgeous crystallized replicated Beauty and the Beast rose, which the Yuna and Zelda engagement ring hung from one of the crystal leaves.

I brought Holly up to the rocky pedestal and she let out millions of tears of joy when she realized what was happening. I then picked up the rose and asked her to marry me, to which she excitedly and gladly said yes!

She was amazed at the effort put into the ring and called it “absolutely perfect”. Holly told me she couldn’t have picked anything better herself if she tried. It was the most beautiful thing she had ever seen.. And I have to agree.” 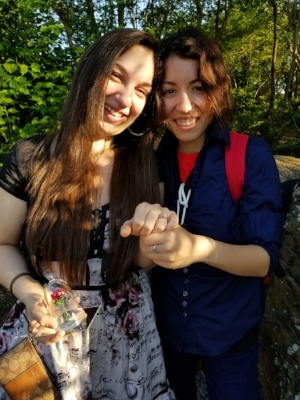 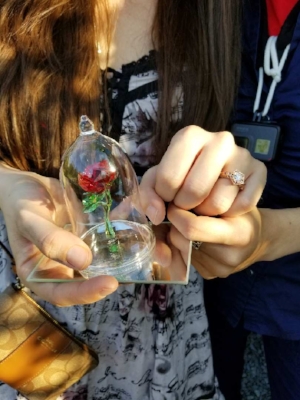 We look forward to working with Aya and Holly again for their wedding bands and can’t wait to hear what beautiful theme they dream up together!