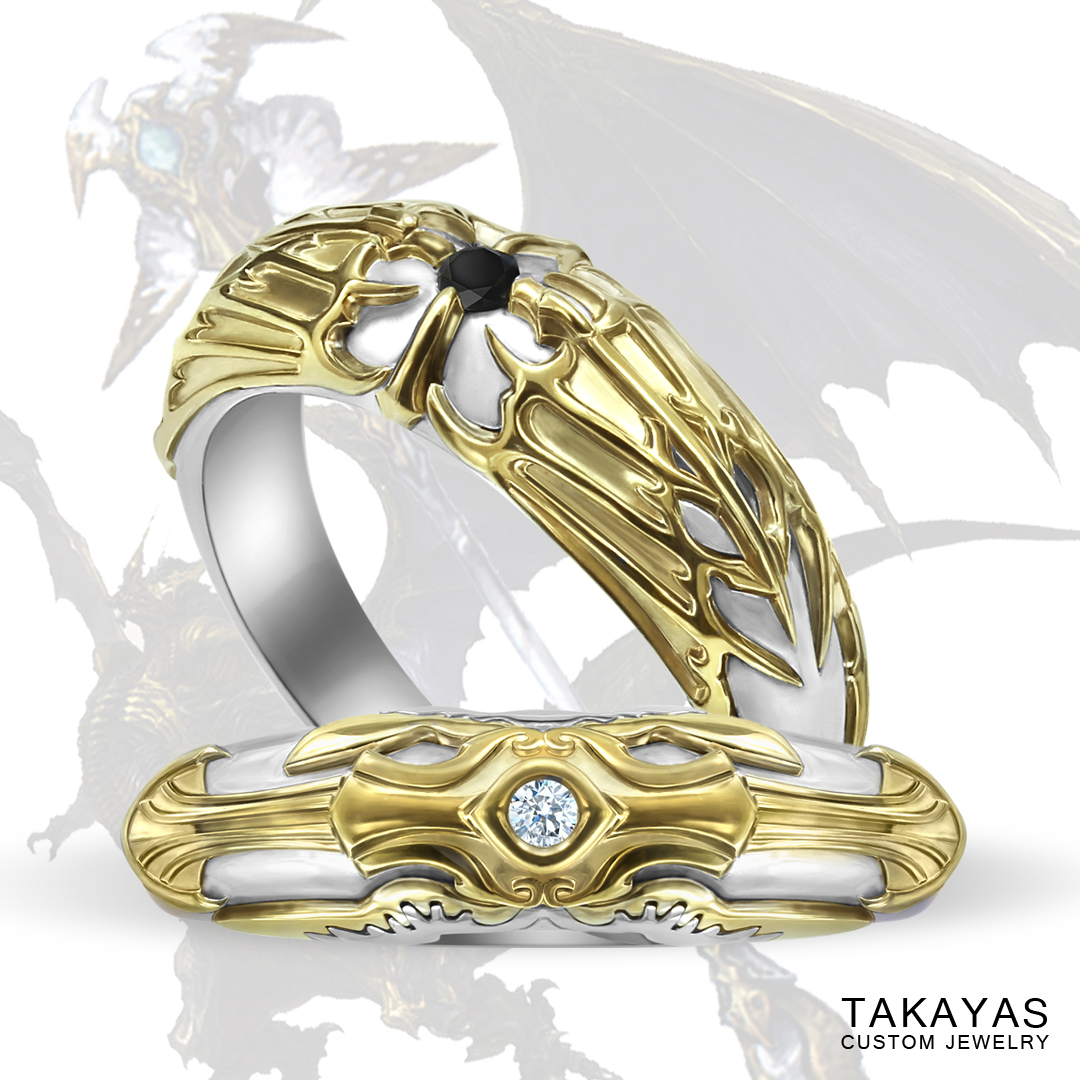 Adam and Chris have been together since 2005, and the two of them immediately bonded over their mutual love of video games, especially Japanese RPGs. It wasn’t for another 6 years that he would propose and even then, the engagement itself nearly lasted another 5, but in the end they were grateful for the extra time to plan ahead.

Chris, who commissioned this custom pair of Final Fantasy inspired wedding rings, contacted us after admiring the custom FFXIV Sultana and Paladin inspired wedding set that Takayas had previously created. “As Final Fantasy fans ourselves,” he explained, “we found the attention to detail and creativity of the designs spot-on, and would love to look into our options for something similar that fits our unique style.” 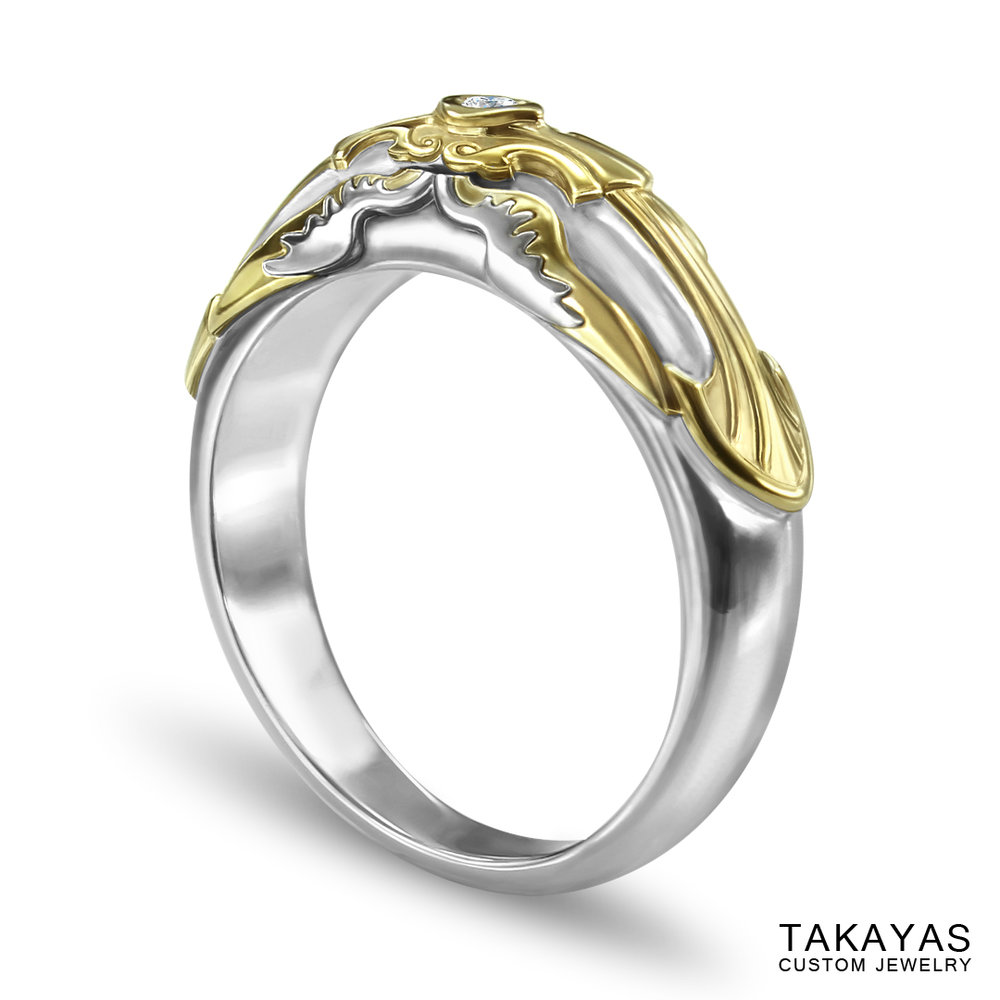 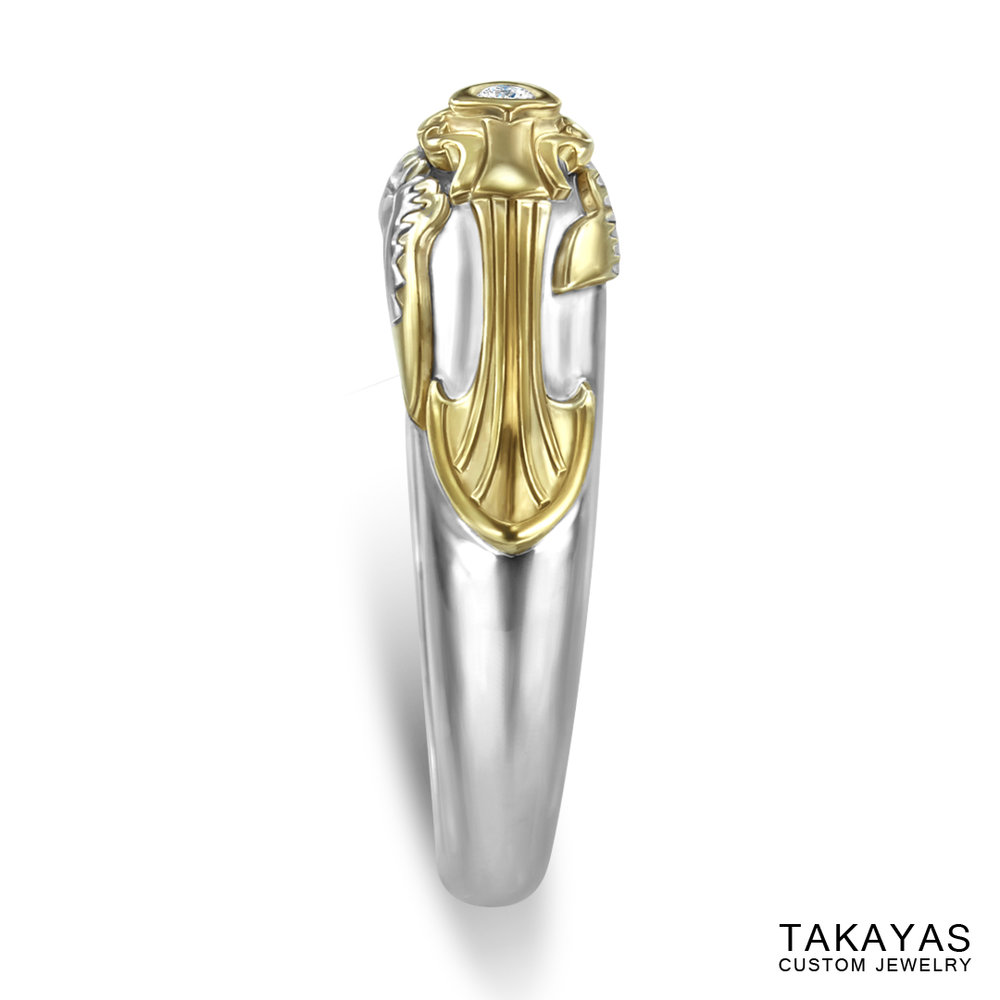 Their concept was to have two rings that looked like they belonged together, even though the design inspirations for each would contrast: one design would be based on the ‘angel wings’ of the White Mage Relic Weapon; the other, inspired by the bat-like wings of The Dragon King, Bahamut. (For you Kingdom Hearts fans, this light-dark, yin-yang, duality is reminiscent of the Oathkeeper and Oblivion keyblades.) 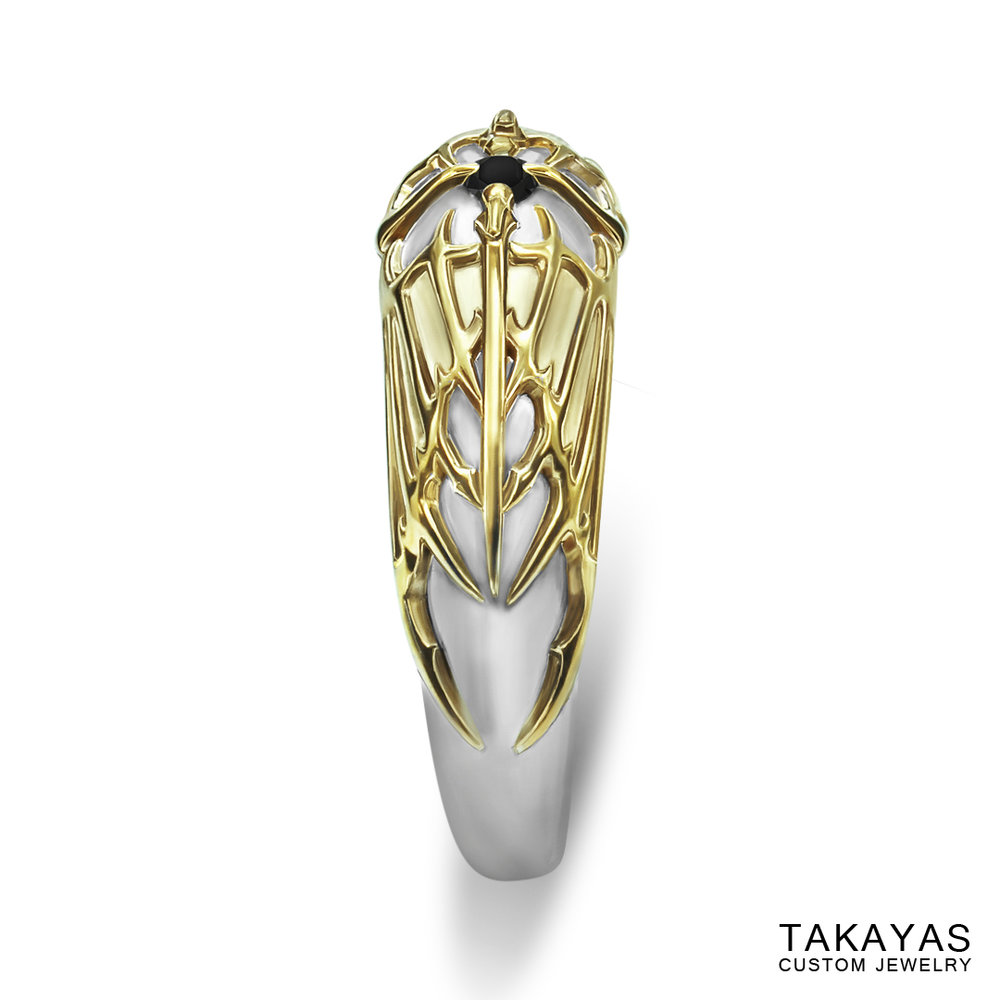 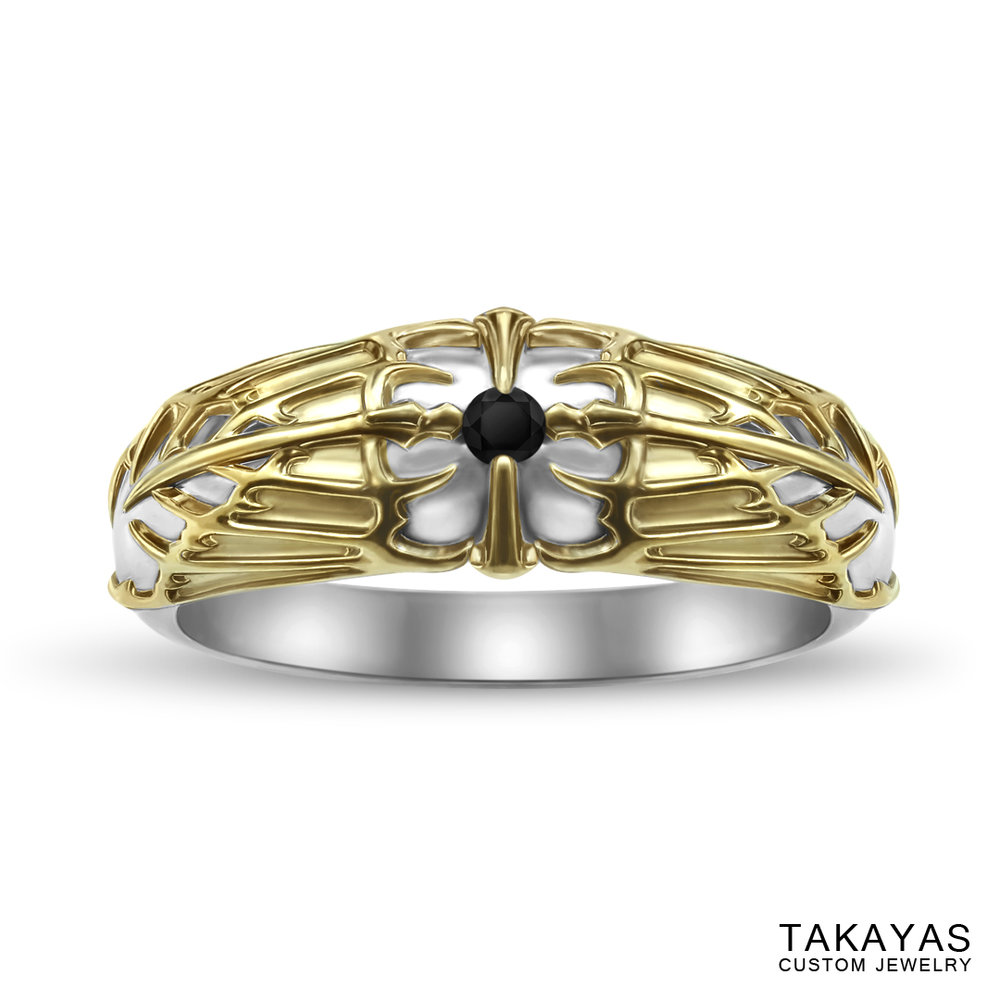 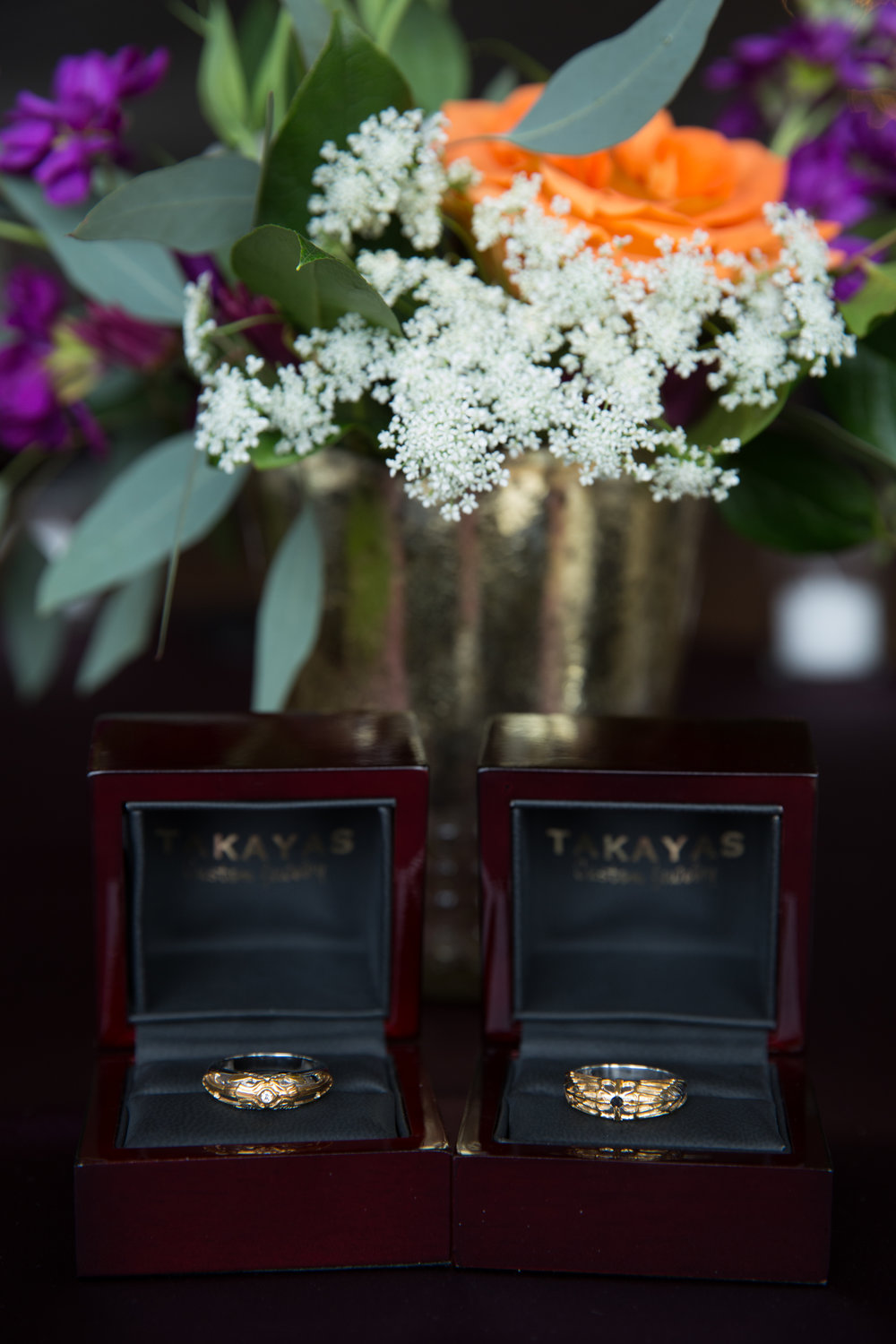 When Adam and Chris received their special wedding rings, they sent us this lovely message:

“We aren’t usually ones to audibly gasp but…wow! They are absolutely stunning, and even though I knew it was a goal we had in mind, I don’t think either of us were prepared for them to look like such a complementary set as they do. Despite the differences in the designs, looking at them side-by-side there is zero doubt that they go together. I’m tearing up just a little thinking about them as I write this!”

We’re happy to announce that this Final Fantasy loving couple is now officially wed, and they sent us their wedding photos, along with another sweet message to Takayas:

“Sure enough, months later and we still find ourselves admiring the craftsmanship and design multiple times daily. The rings are reflections of ourselves as much as they are of our love for each other, and we can’t thank Takayas enough for creating them!”

We wish all the happiness to be mustered for Adam and Chris! Thank you very much for working with us to make your dream rings come to life! 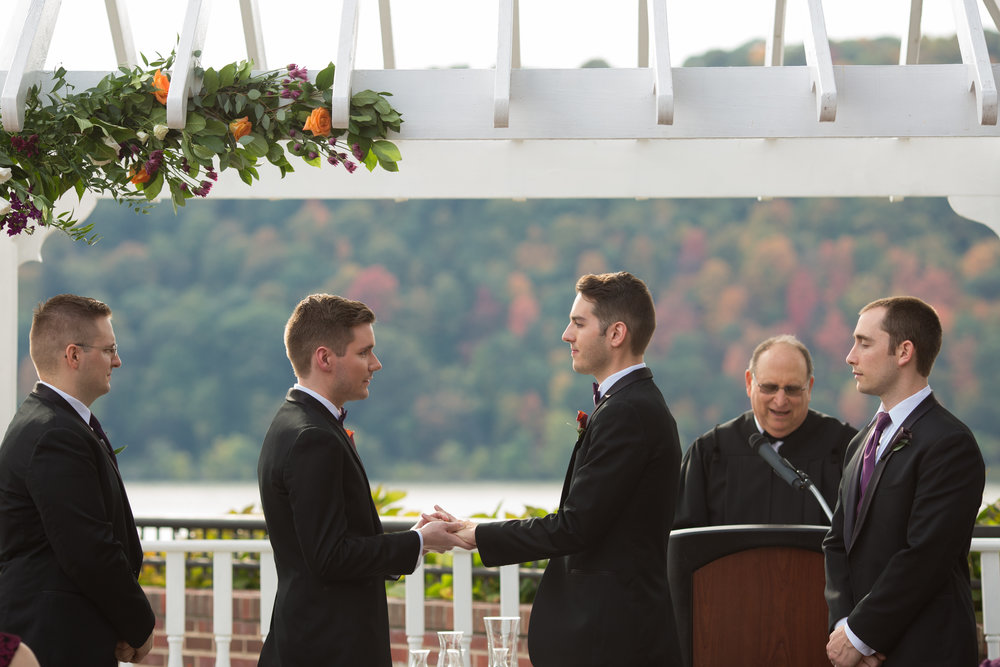 If you’ve found the Yuna to your Tidus or the Rinoa to your Squall, we would love to make a special pair of rings that capture the essence of your unique relationship! Simply send us an email using our inquiry form to begin the conversation.

We look forward to hearing from you!