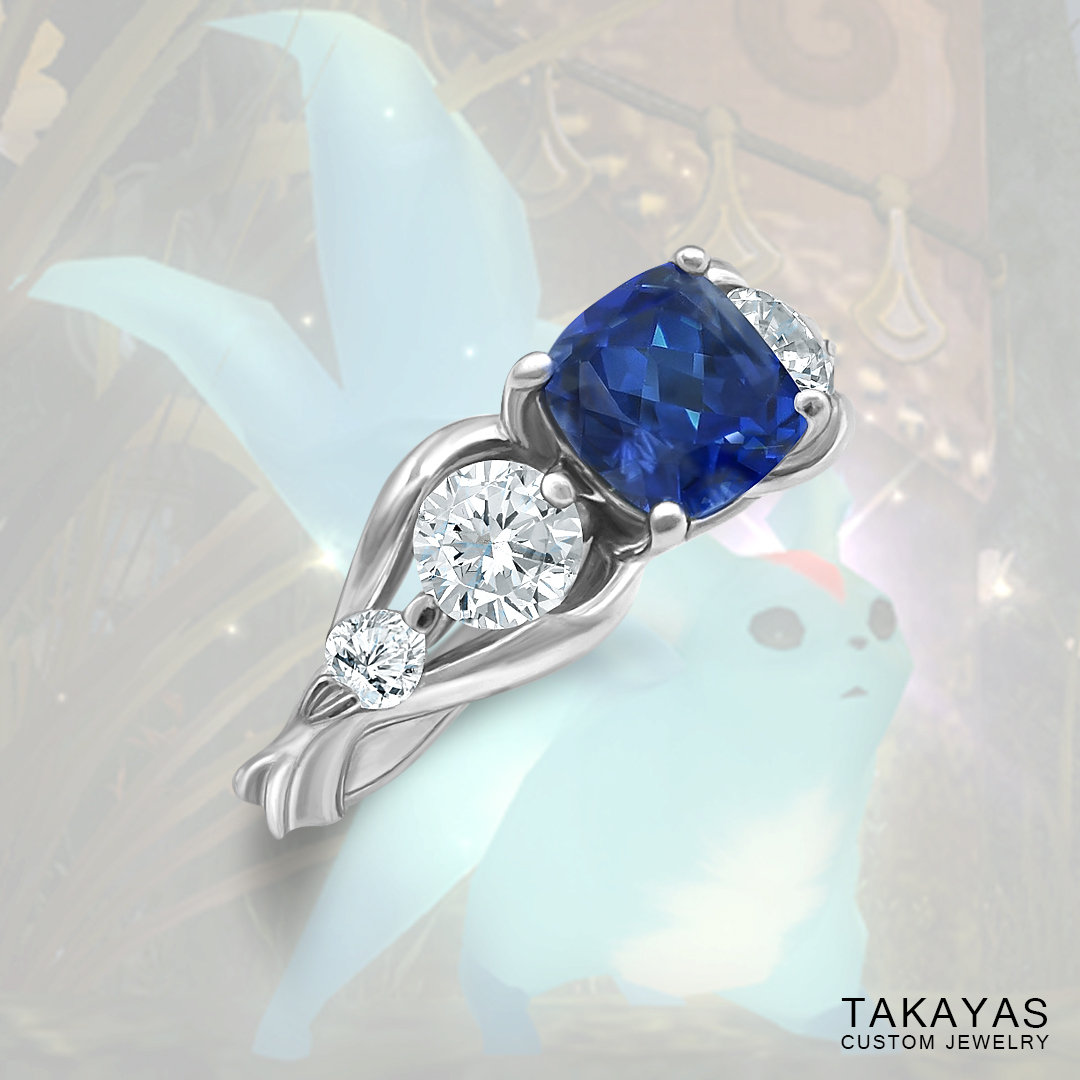 When Jonathan and Rachel first began their relationship, they were living several thousand kilometers apart and so a lot of their quality time together was experienced through technology and video games. Final Fantasy XIV was one of their favorite games to play together; Rachel would always play the Arcanist/Scholar character, and Jonathan usually played as a Paladin. ” We’re sort of a perfect healer+tank match.” Jonathan told us.

Although Rachel usually plays as a Scholar, she also has the ability to play as a Summoner (both are jobs of the Arcanist base class) and absolutely adores the Summoner’s pet carbuncle! Jonathan told us she even owns both of the plushy carbuncles (Emerald and Topaz) and, “if Square Enix were to ever allow Carbuncles to be glamoured over her [Scholar’s] fairies, I think she would do so.” 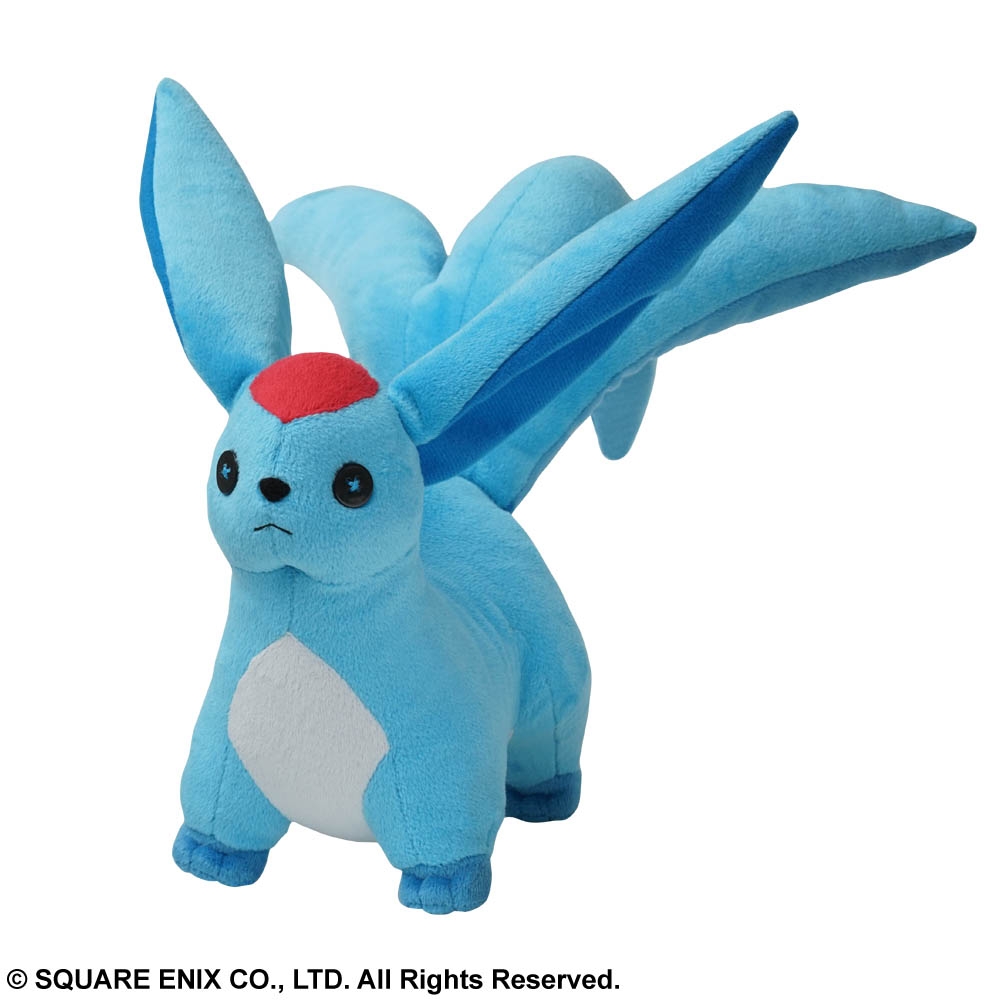 “Knowing that Rachel loves carbuncles (and real cats and dogs),” Jonathan explained, “I thought that an engagement ring highlighting the things she enjoyed in a game that we’ve spent hours playing together would be ideal. I wanted something simple, yet elegant. A design that at a distance looked like a masterly crafted piece of jewelry but, on closer inspection, had subtle meaningful elements that would remind her of our bond.” 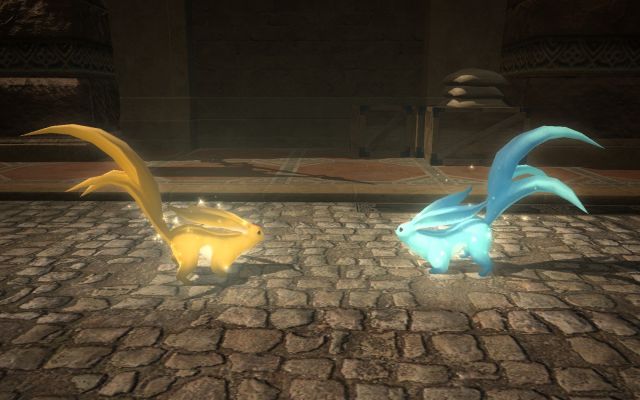 FFXIV in-game screenshot of the Topaz and Emerald Carbuncles, inspiration for this engagement ring by Takayas Custom Jewelry

So, Takayas took the “two abstract carbuncles” idea in a different direction, instead forming the entire ring out of their bodies. As Jonathan requested, at first glance the ring simply looks like an elegant sapphire and diamond engagement ring. However, upon closer inspection, you’ll notice the abstract forms of the two carbuncles.

The two small pear shaped diamond accent stones represent the head of each carbuncle, their abstract bodies wrap around either side of the ring to create the shank, with their 3-pointed tails meeting underneath the center stone. 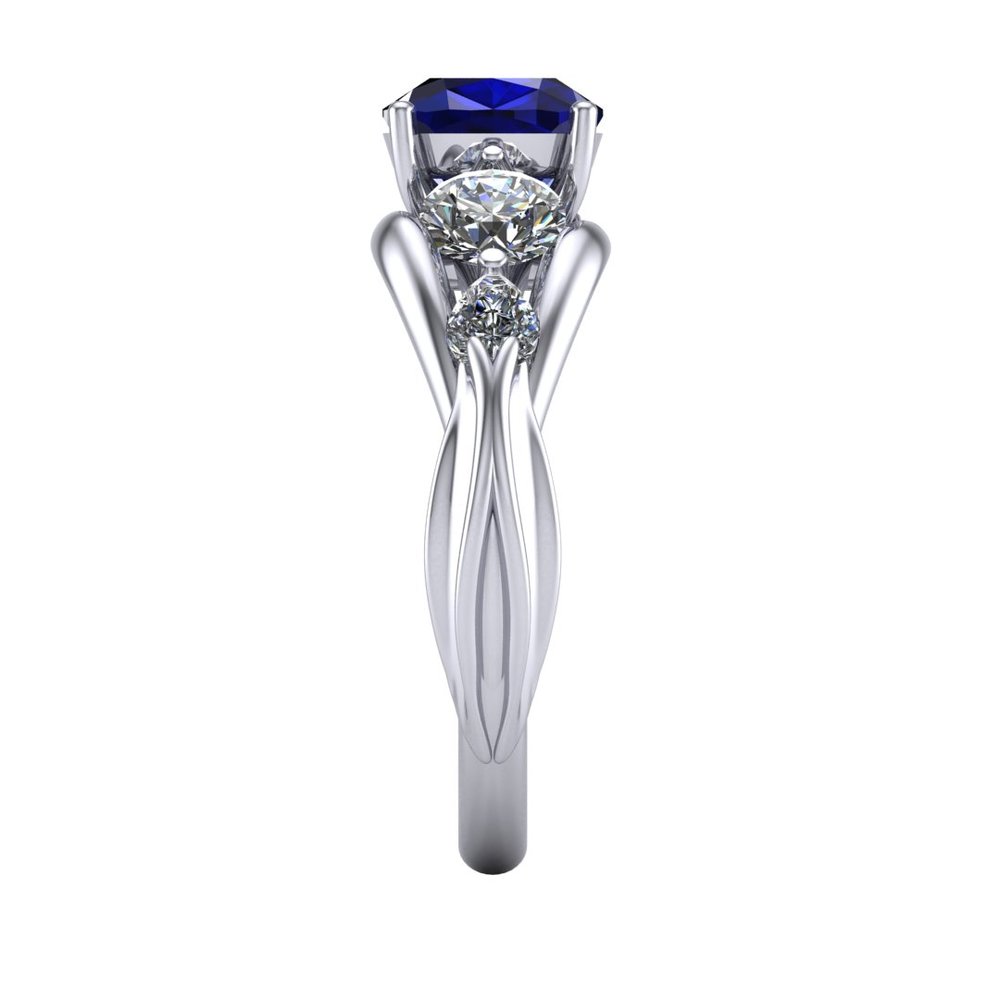 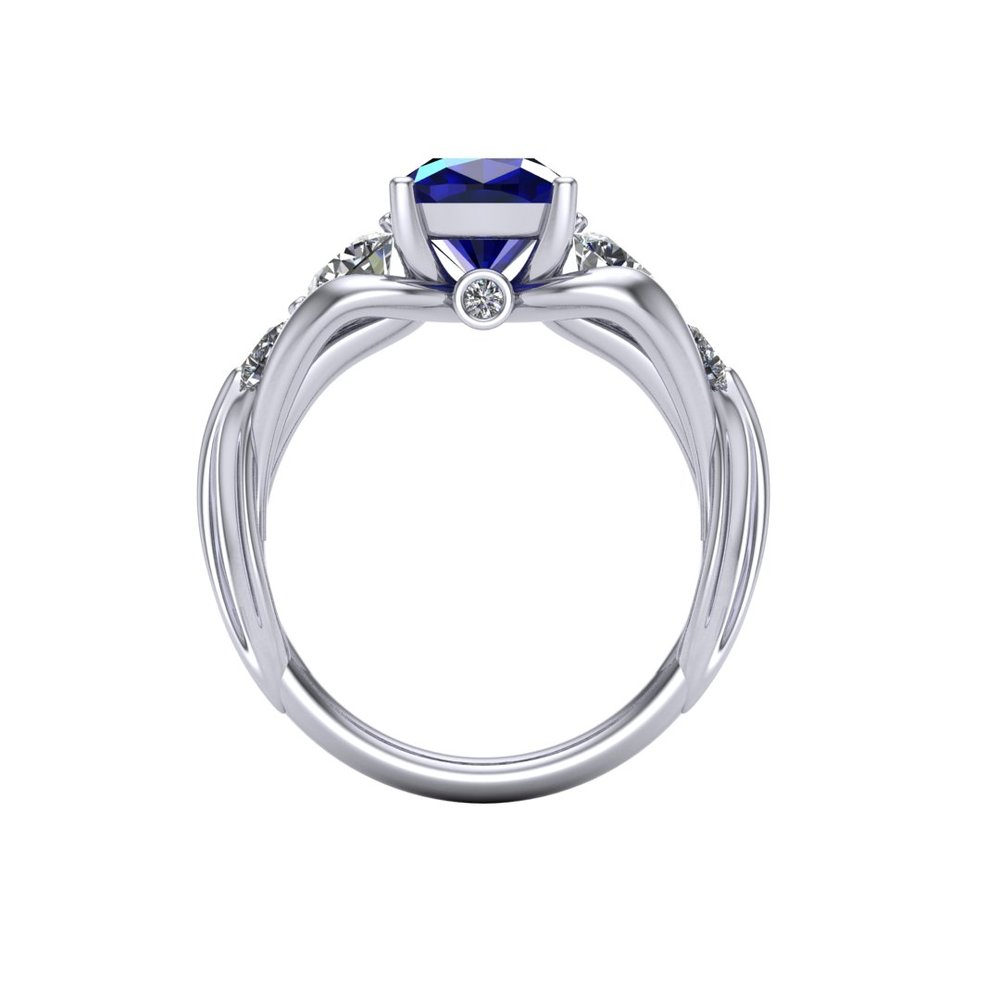 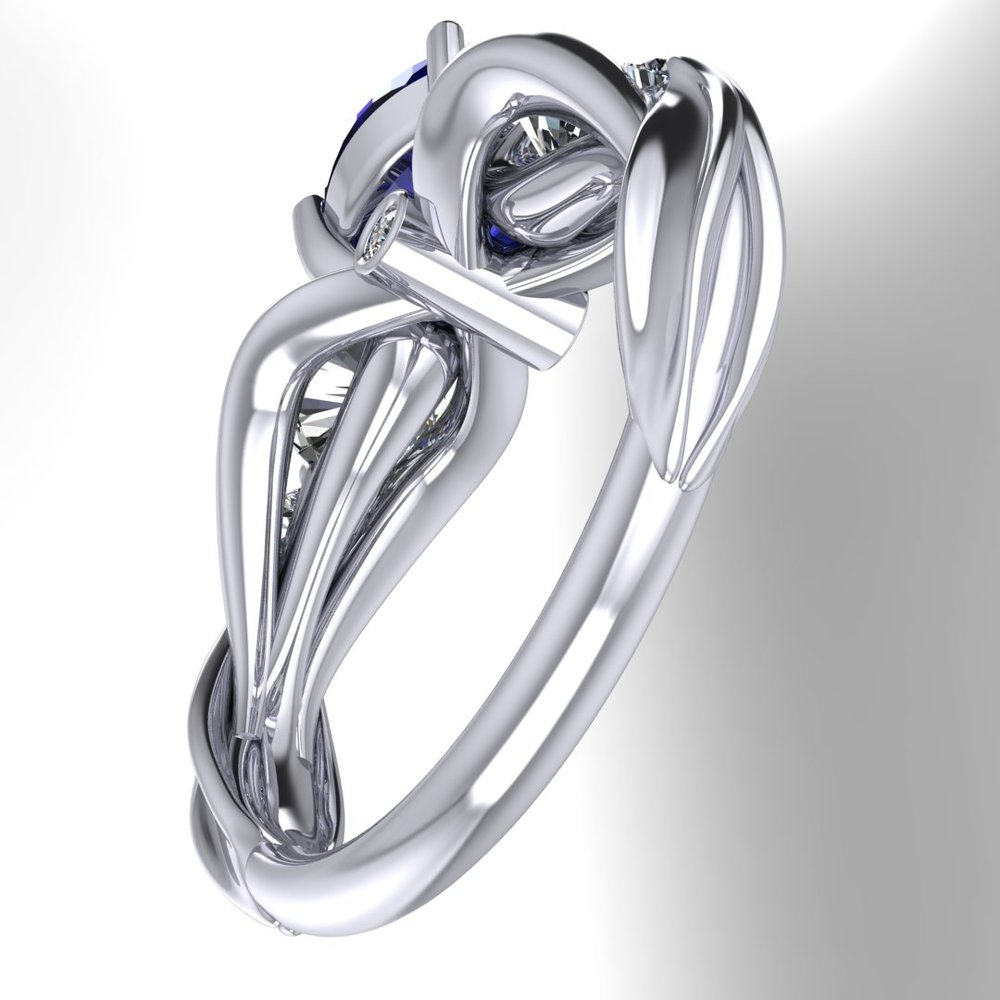 “I wanted the two carbuncles to represent our individual and unique personalities.” Jonathan said. “The center sapphire was a form of “bond” between us.” And, regarding the design change from using the carbuncles around the center stone to using them to form the ring itself, “I loved it. It fulfilled the idea of two distinct lives coming together as one, and wrapping completely around the band made me think of love being eternal.”

When asked what he thought about his ring once he saw it in person, Jonathan told us, ” I was stunned. I had seen the ring in pictures before it arrived, but they really didn’t do the ring justice. When I had the ring in my hand, I just didn’t know what to say. It was beautiful, and everything I had hoped it would be.” 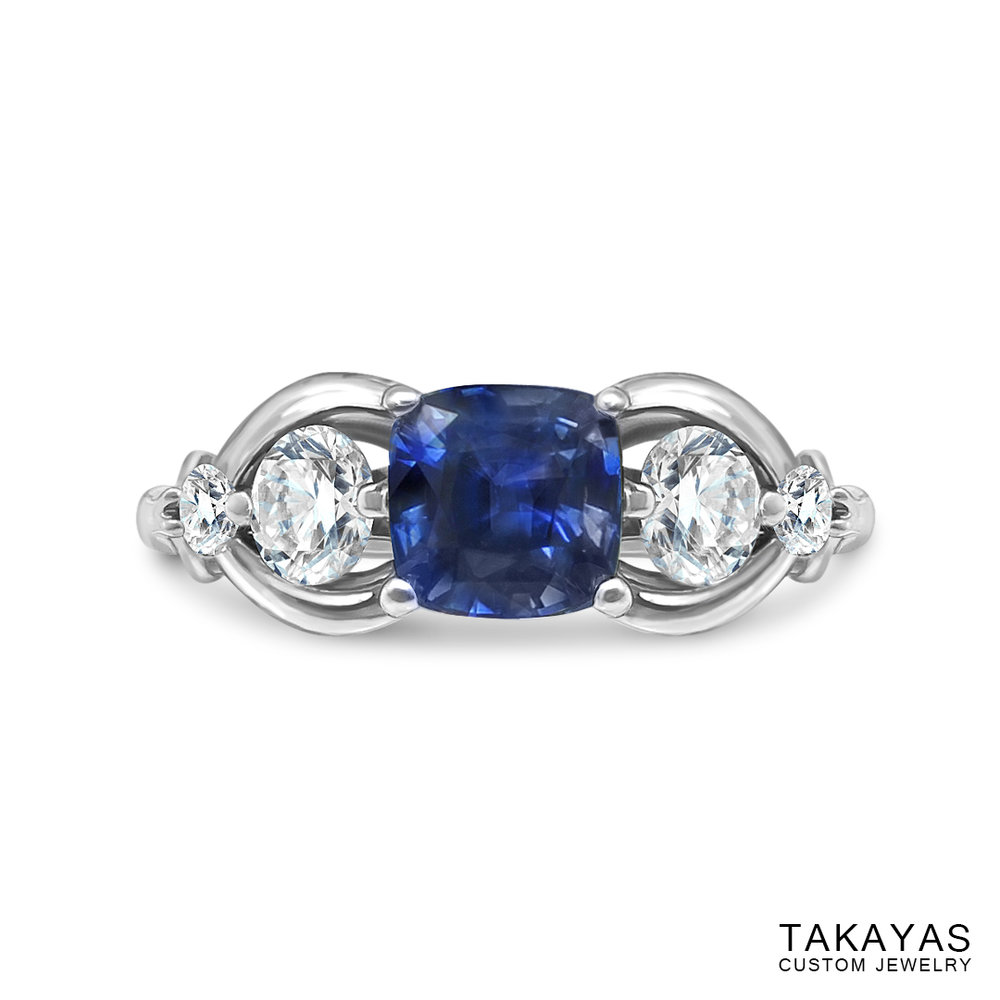 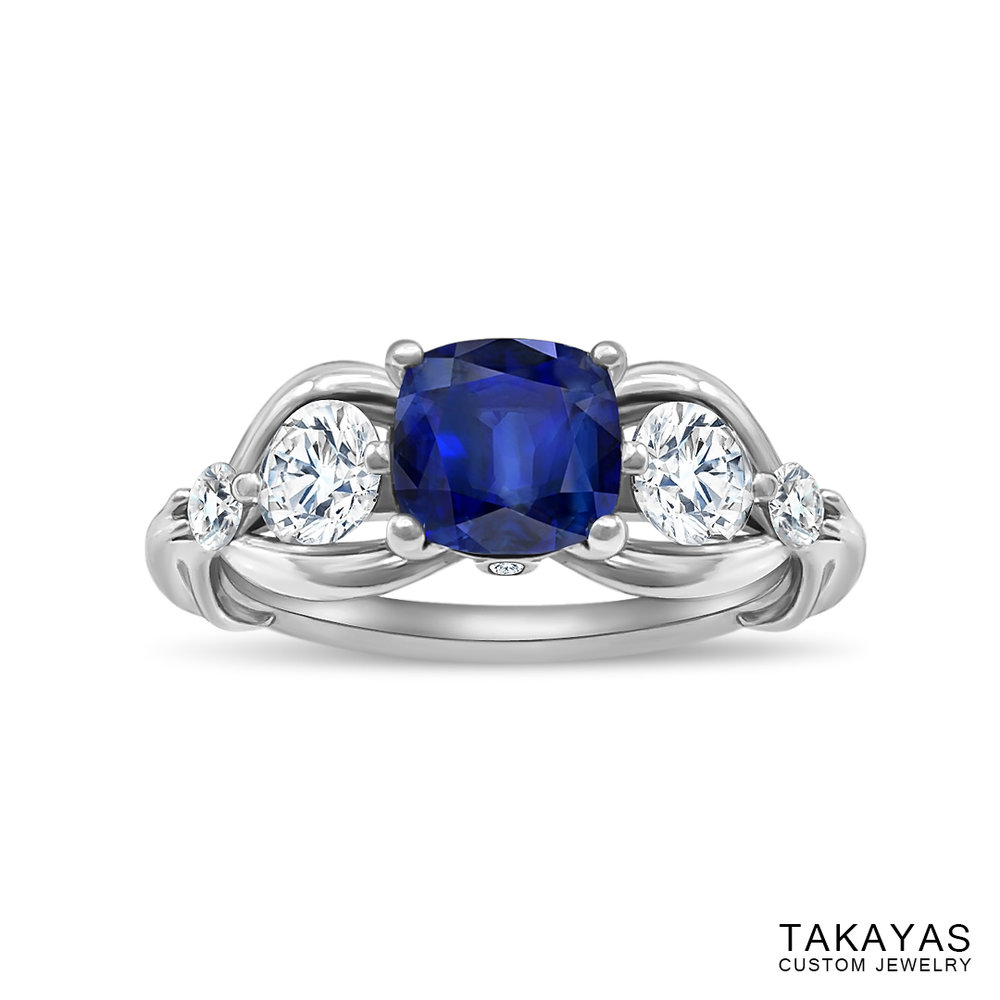 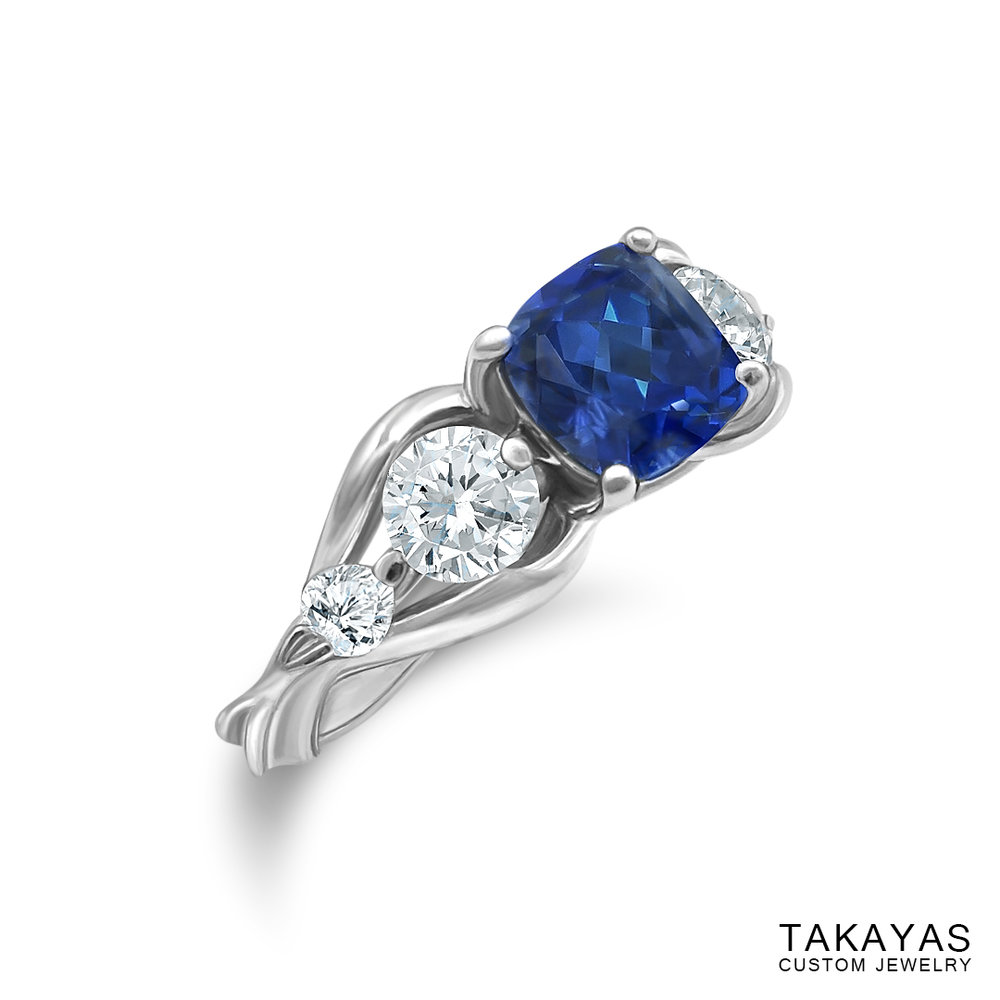 Jonathan proposed to Rachel on a trip to Athens, Italy. That sounded incredibly romantic, so we just had to ask for a description: “The proposal was quiet and personal. Neither of us is big on public places or large crowds. Rachel came to visit me in Athens and I reserved rooms at a hotel near the Acropolis. The room I reserved had a balcony where you could look out at the city, and the Acropolis. I proposed on that balcony. The place is symbolic for history, and now both of us share a piece of history with this ancient site.” 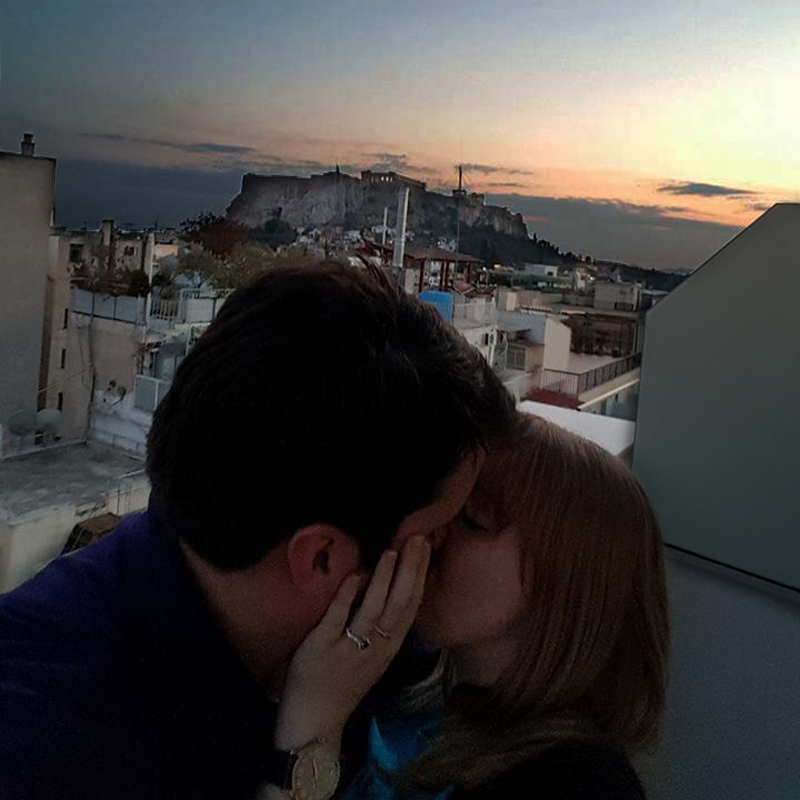 And, when we asked about Rachel’s reaction to the surprise, Jonathan quipped, ” I sometimes refer to Rachel as my little detective or Sherlock Holmes. She admitted that she suspected I may have worked with Takayas, but she didn’t know exactly what I was planning or anything about the design. She was ecstatic about the ring, and its beauty. When I pointed out the hidden meaning, her reaction told me the ring was perfect.”

We really enjoyed creating this special engagement ring for Jonathan and Rachel and wish the happy couple a future of wedded bliss!