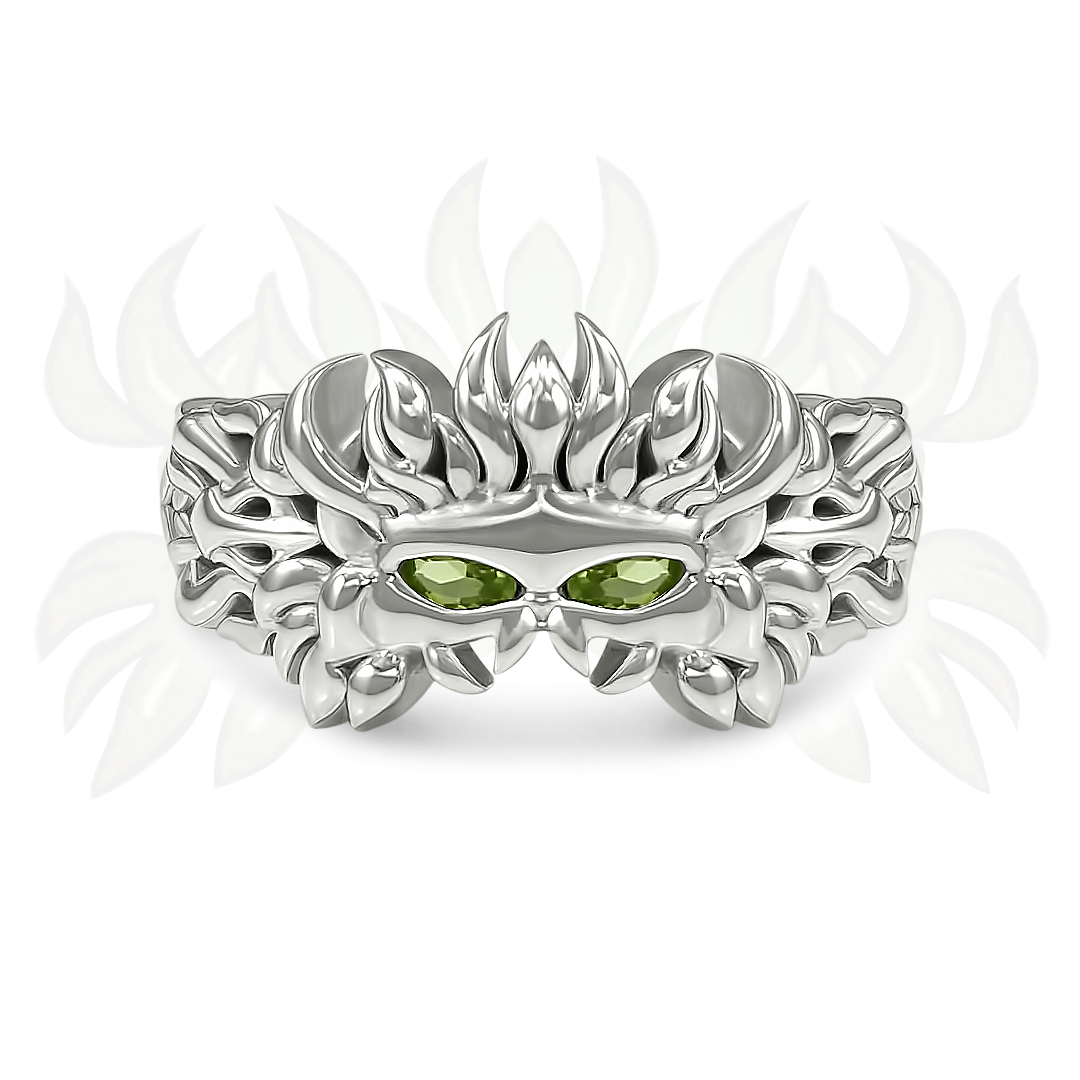 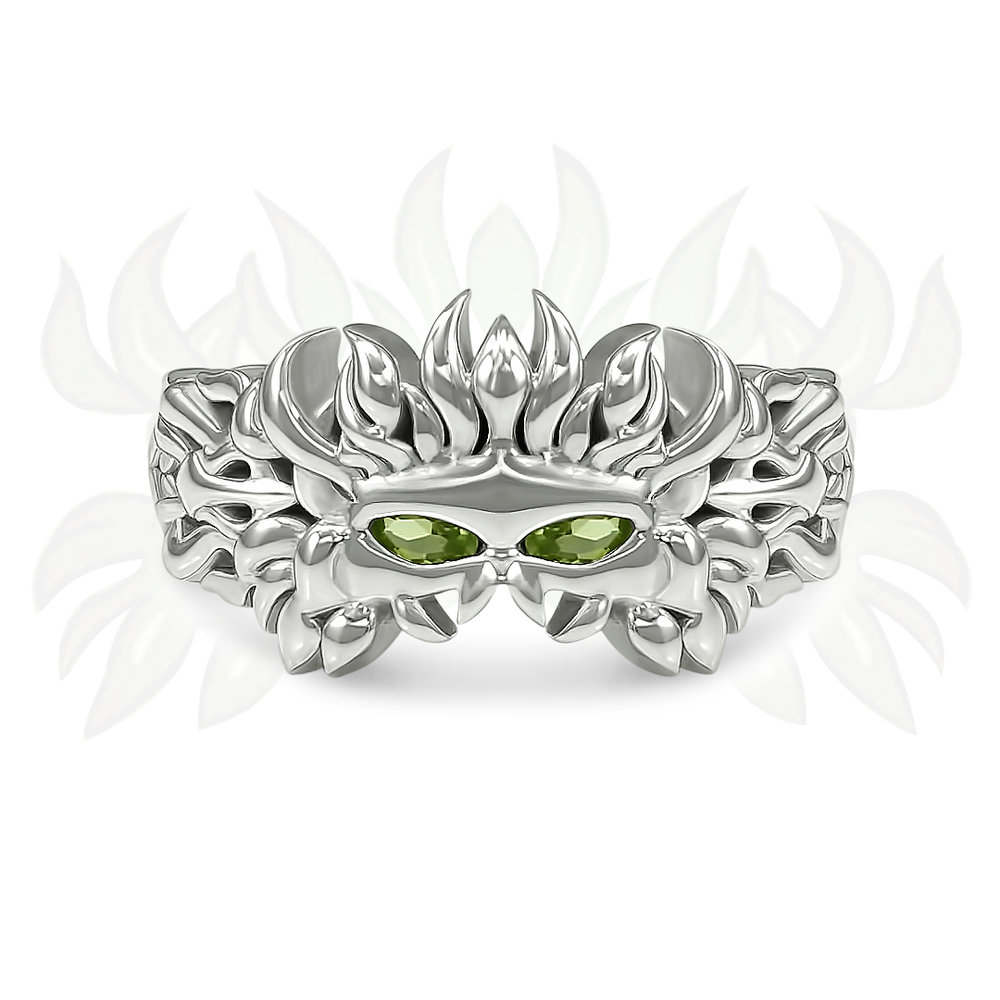 There are solitaire rings and there are eternity bands. Rings with three stones and bands with no stones. And then, there is Sam’s engagement ring: 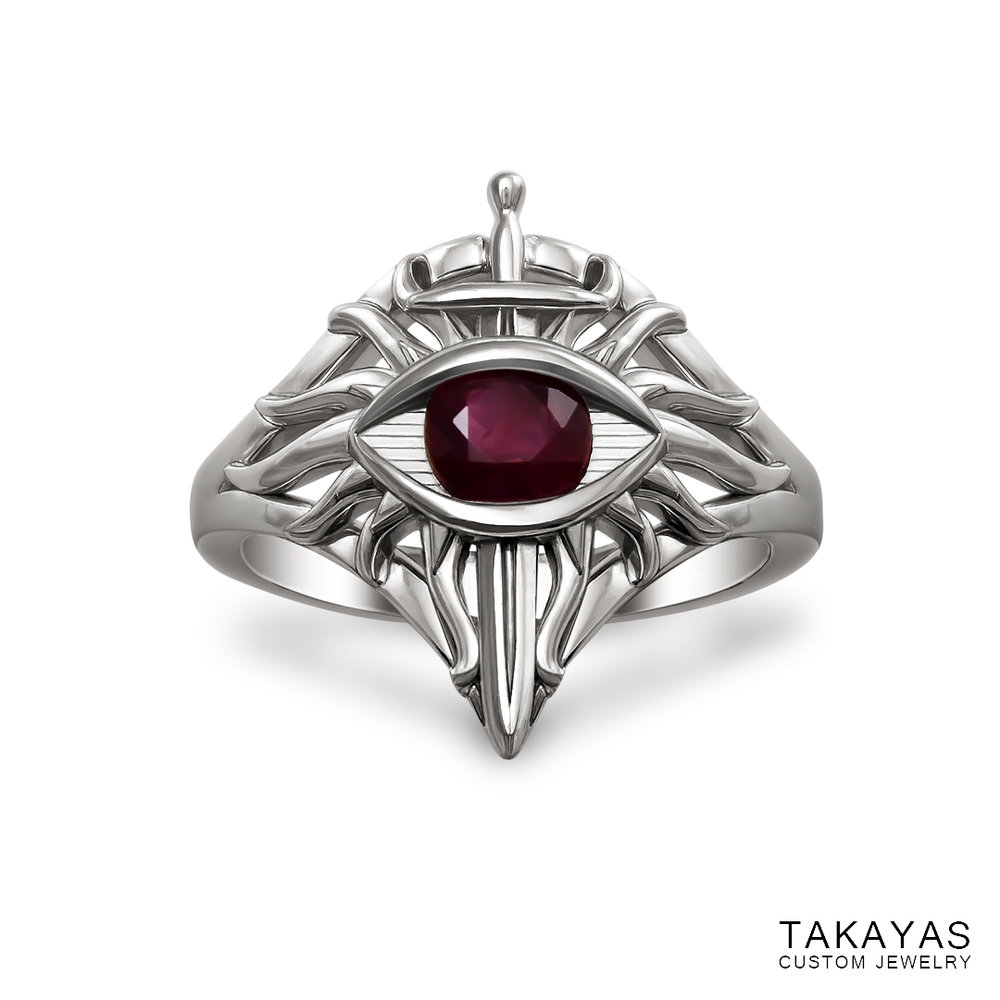 “Sam and I met in a game development program at college at the end of our junior year. Since then, we’ve grown together through our senior year, graduation, and into the real world of adulthood. The best way I can describe us is a team, we always look out for one another and tackle problems together. I can’t imagine spending my life without her!” 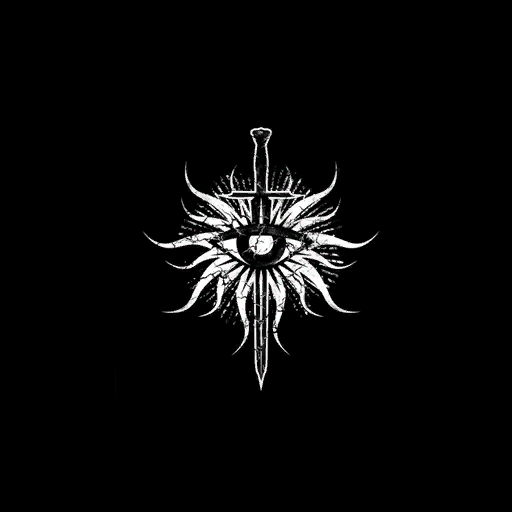 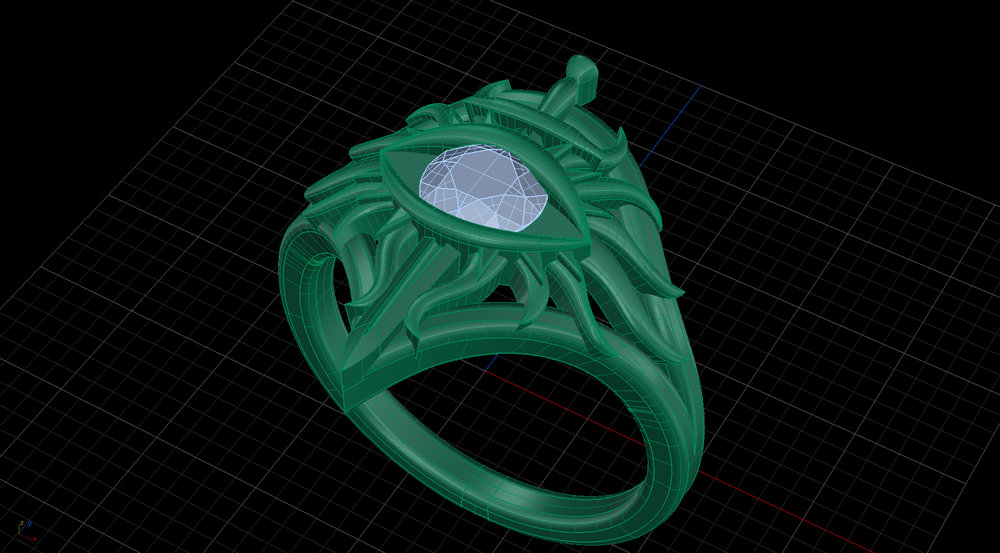 We’ve both been gamers since we were little, so they are a big part of our lives. Dragon Age is our favorite game series, and we really bonded over Dragon Age: Inquisition this past winter. We’d play for hours and then spend hours talking about it. That’s when I knew that I had to get a ring custom made just her for, in the Dragon Age style. “ 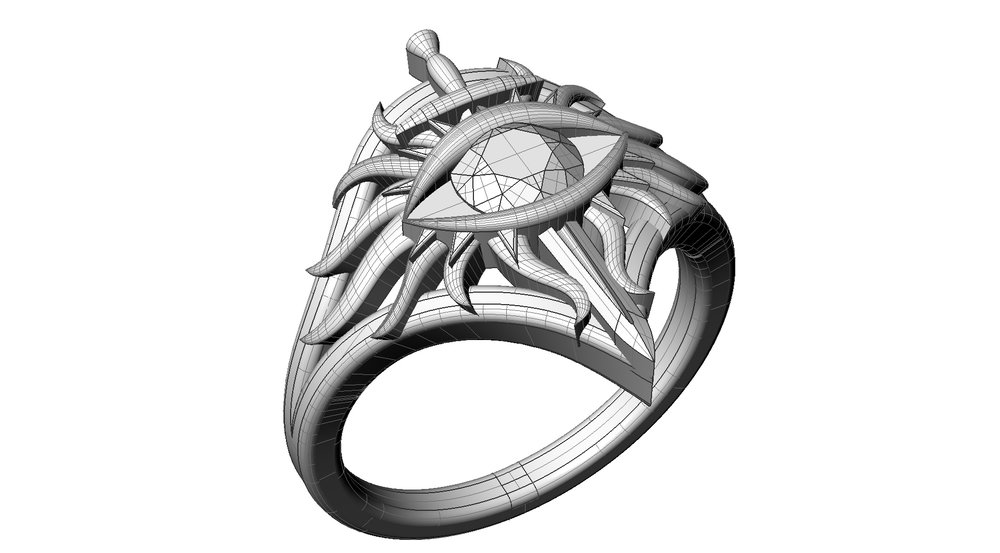 Takayas incorporated elements of Cassandra’s shield into the ring’s frame to provide a secure base for all of the different, elongated pieces. This would also create a comfortable buffer between Sam’s finger and the Inquisition symbol’s points.

The shield’s shape was not overly exaggerated in order to keep the focus on the dazzling ruby Alex picked out for the center stone. 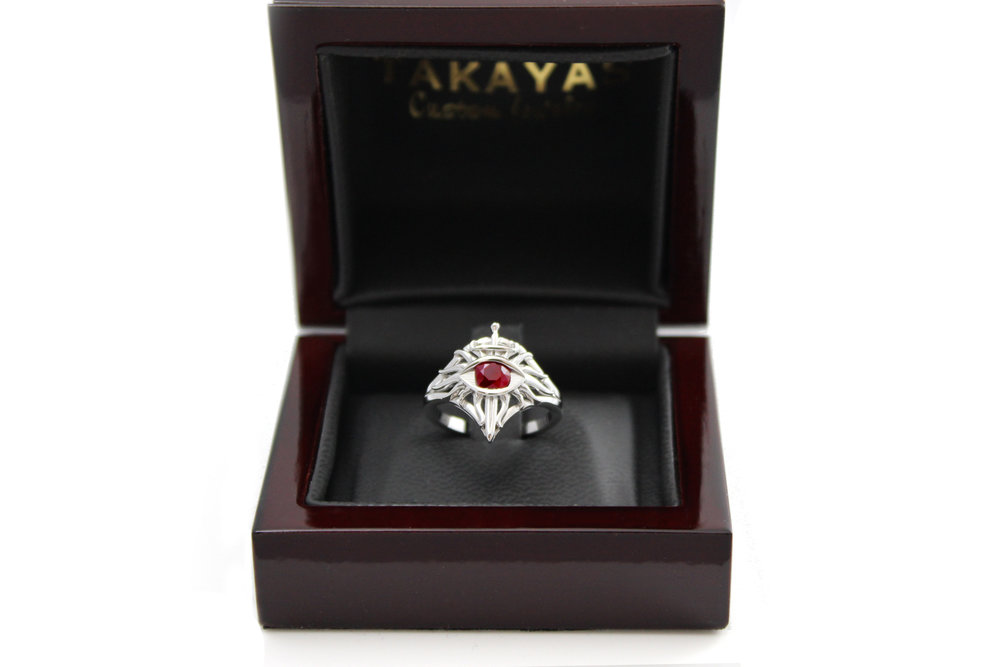 Working with Alex throughout the design process was an absolute pleasure as he was thoughtful, communicative, and best of all,we got to share in his excitement once Sam said yes.

“I’d actually inquired at a couple companies for having the ring made before I found Takayas’s website, but I wasn’t happy with the designs and communication I was receiving. Takayas blew me away! He and Karen were very communicative during every step of the process, worked well within the timeline I had, and of course created the perfect ring. I remember getting the email with the CAD product and being amazed at how Takayas took a simple game symbol that I provided and turned it into the most beautiful ring I’d ever seen!” 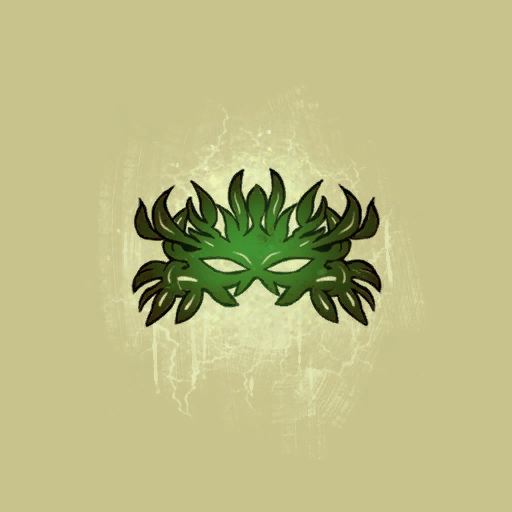 We were thrilled to work with them again months later when Alex proposed a wedding ring idea based on the Dalish heraldry. Sam planned to wear her wedding ring on her other hand, so it gave Takayas lots of design freedom because he wouldn’t be constrained by space.

One of Alex’s ideaswas to use green gem for the eyes, but it was impossible to find green marquise shaped accent gems in the necessary small size.To create the illusion of a green eye effect, Takayas designed the heraldry symbolwith marquise shaped cut outs in the metal to overlay over round peridots. 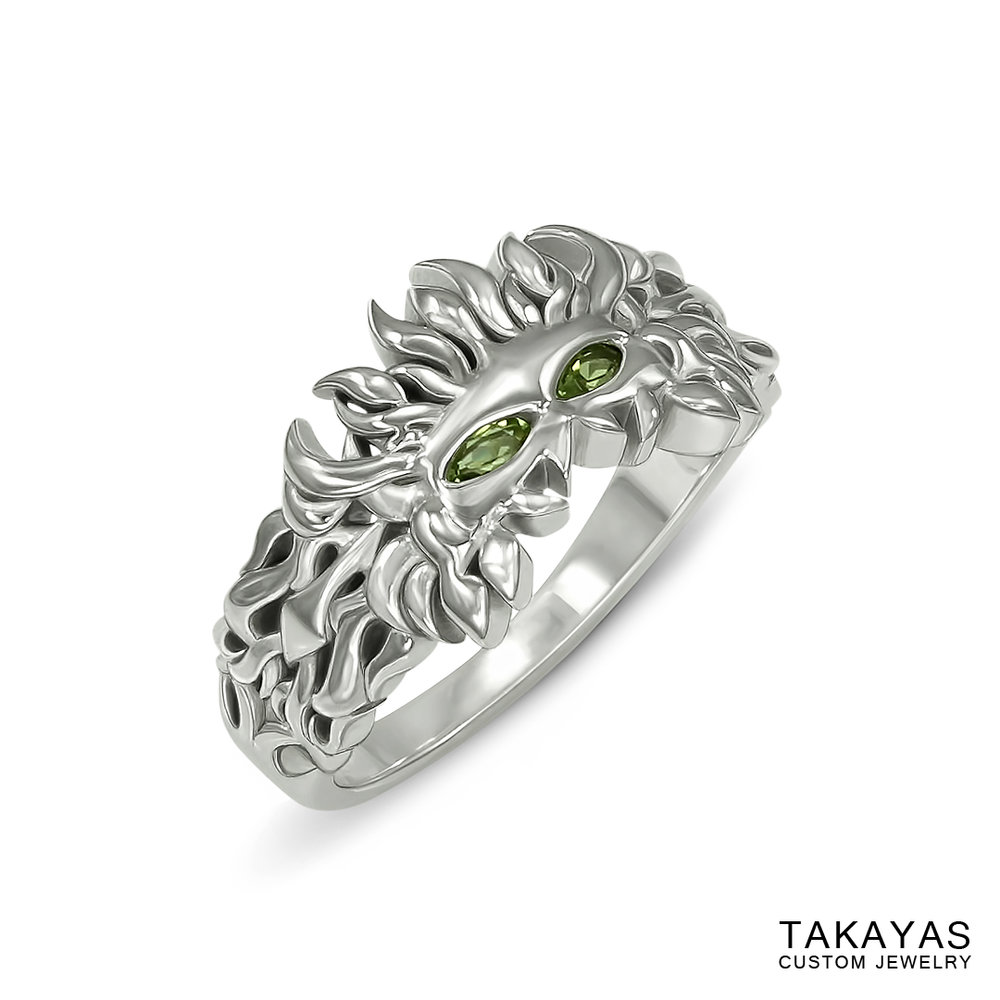 To help break up the width of the ring, Takayas designed the ring with lots of open spaces in-between the mask points help to lighten the heaviness of the metal. 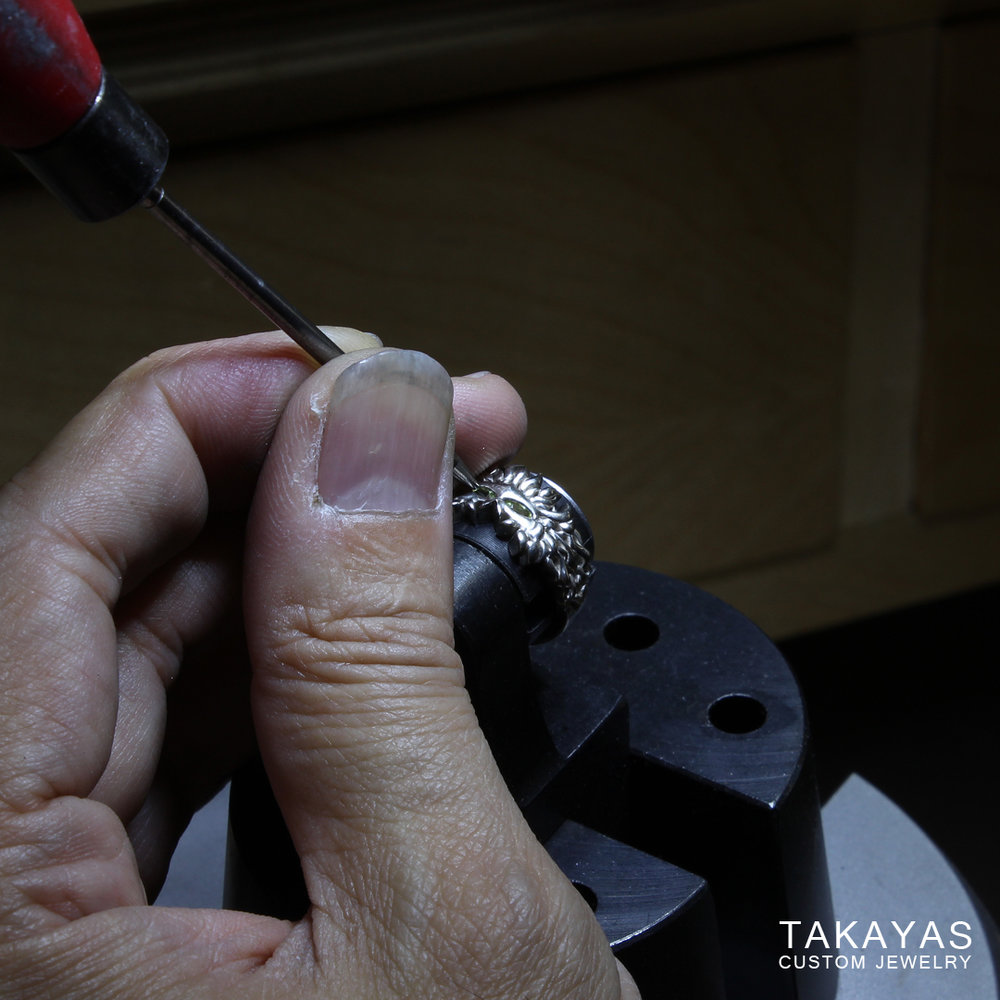 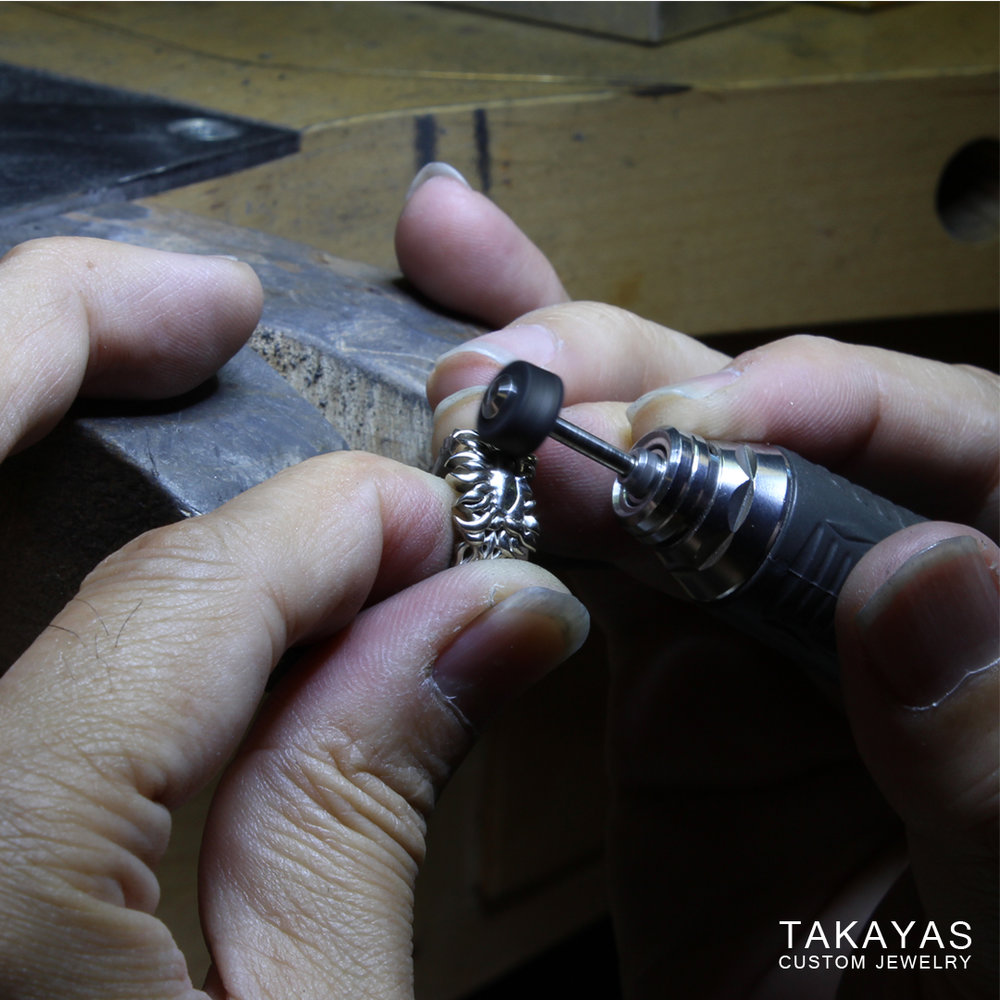 On the sides of the ring, headded a few extra curves in order to transition the mask design to the rest of the band. He tried to capture the flowing, organic feel as much as possible in his elven design interpretation on the sides. 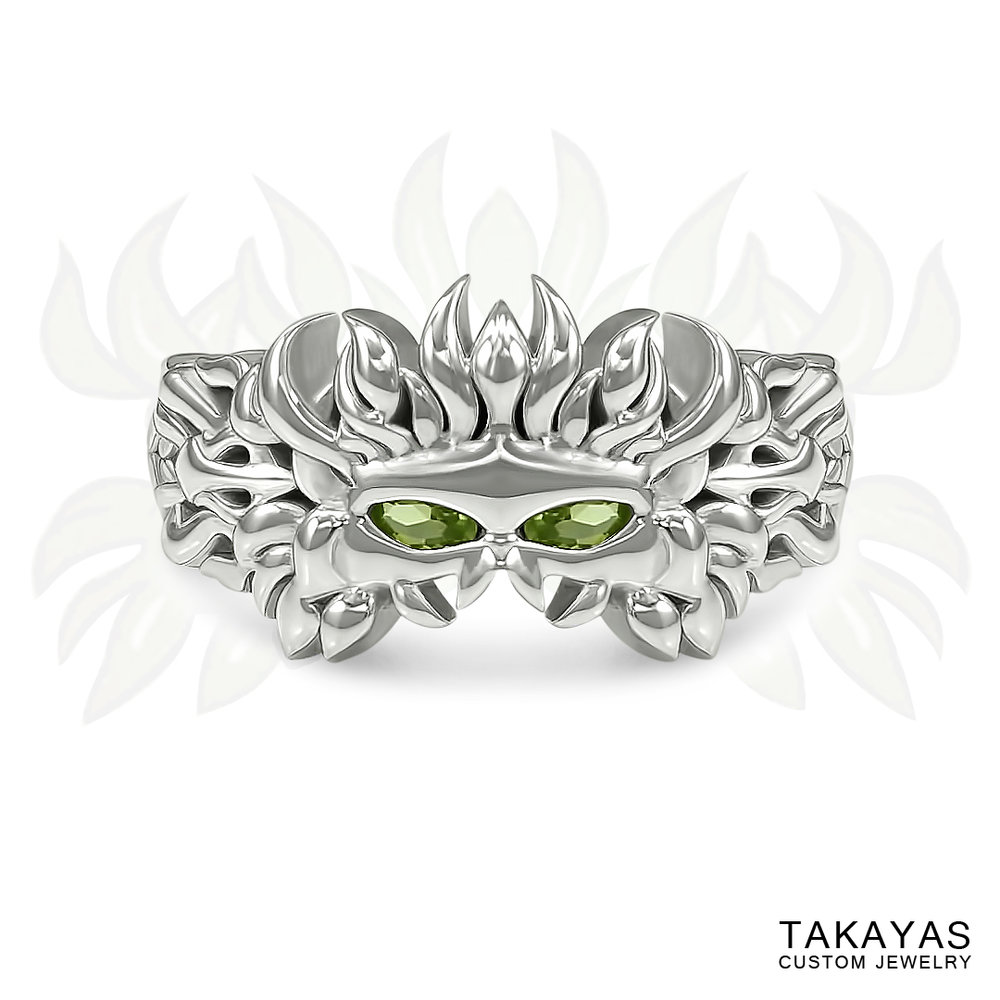 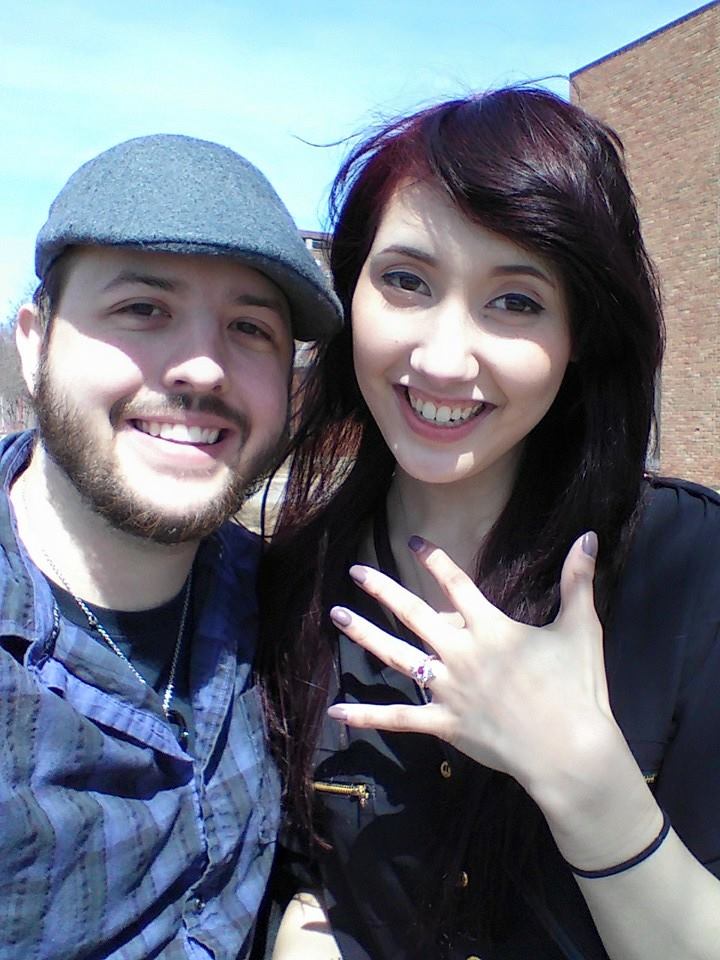 “Since the moment I proposed, Sam hasn’t been able to take her eyes off of it, and casually claims that there has never been an engagement ring as cool as this one. We couldn’t be happier, thank you Takayas!

We wish nothing but the best to the one of the nicest couples in Thedas!

Read more about the proposal here at the official Dragon Age website:http://www.dragonage.com/en_US/news/fanquisition-spotlight-april-21