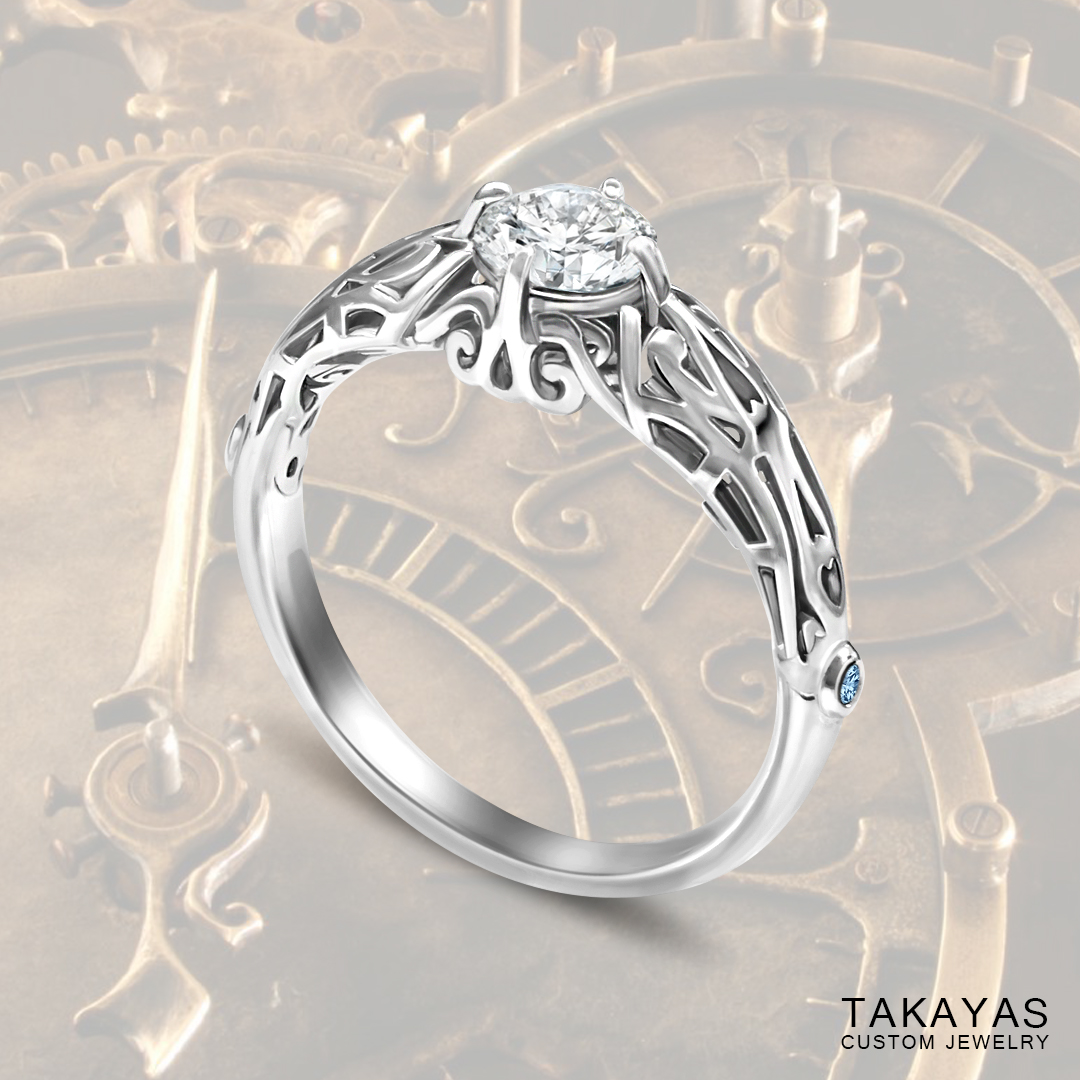 Today’s featured engagement ring is inspired by the concept of time and the recurring role it has played in this couple’s relationship.

Fittingly, the timing wasn’t quite right for our client’s original proposal plans so, he’s working on an even better surprise proposal and has generously allowed us to share his beautiful ring design with you in the meantime (anonymously, of course. We don’t want to ruin the surprise.) Keep an eye out for the future follow-up story once she’s said yes!

Now, on to the design story:

Like many of our customers, this particular client is an avid gamer so, when he first discovered Takayas’ work, his initial urge was to commission a Chrono Trigger inspired engagement ring. However, since his girlfriend doesn’t share his passion for gaming, he continued brainstorming potential inspirations for her special ring… and the Chrono Trigger idea got him thinking about the concept of time. He told us, “The more I thought about it, the more I began to realize how much time has been central to our relationship from the beginning.”

That was it! This ring would be inspired by time itself. He sent us images of different clocks, clock hands, and gears that he liked, along with information about her favorite board game, Seasons (which works into the “time” theme quite nicely), let us know that he’d prefer a diamond center stone and teal accent gems to reference her favorite color, and left the rest up to Takayas’ imagination. 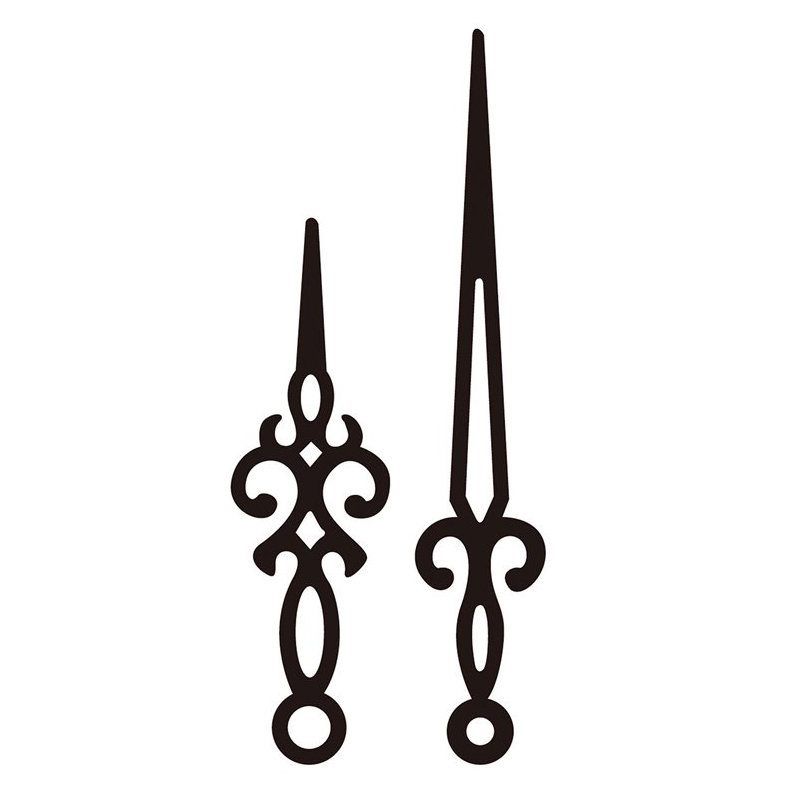 one of the clock hand inspiration images

“What I want this ring to ultimately represent is that even time itself can’t come between us, and that all my time is hers. And if need be I would wait for her until the end of time.”

To capture this concept of time, Takayas decided to create stylized hour hands on the shoulders of the ring, using their tips as the East and West prongs that hold the center diamond, with a blue diamond accent stone set at the base of each hour hand to bring in some of her favorite color. To complete the open-work design, Takayas referenced decorative elements from the client’s favorite Gothic clock image. 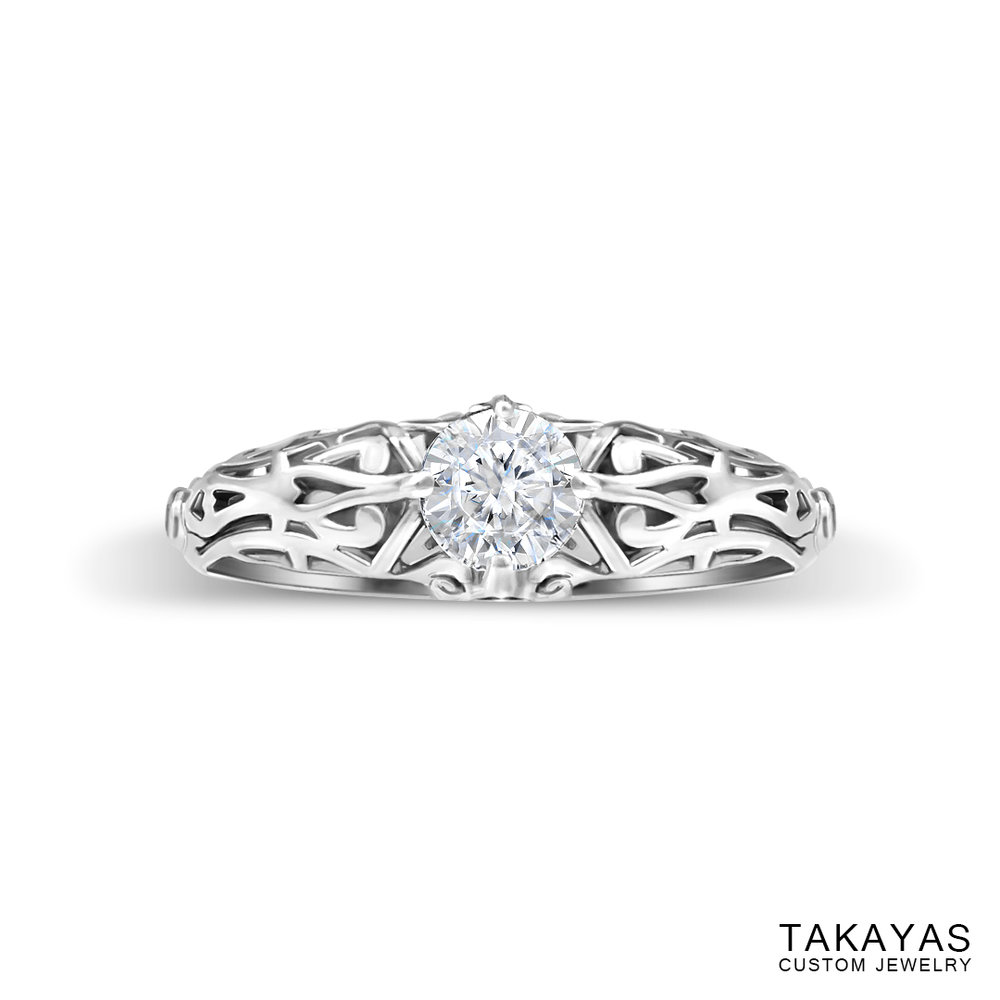 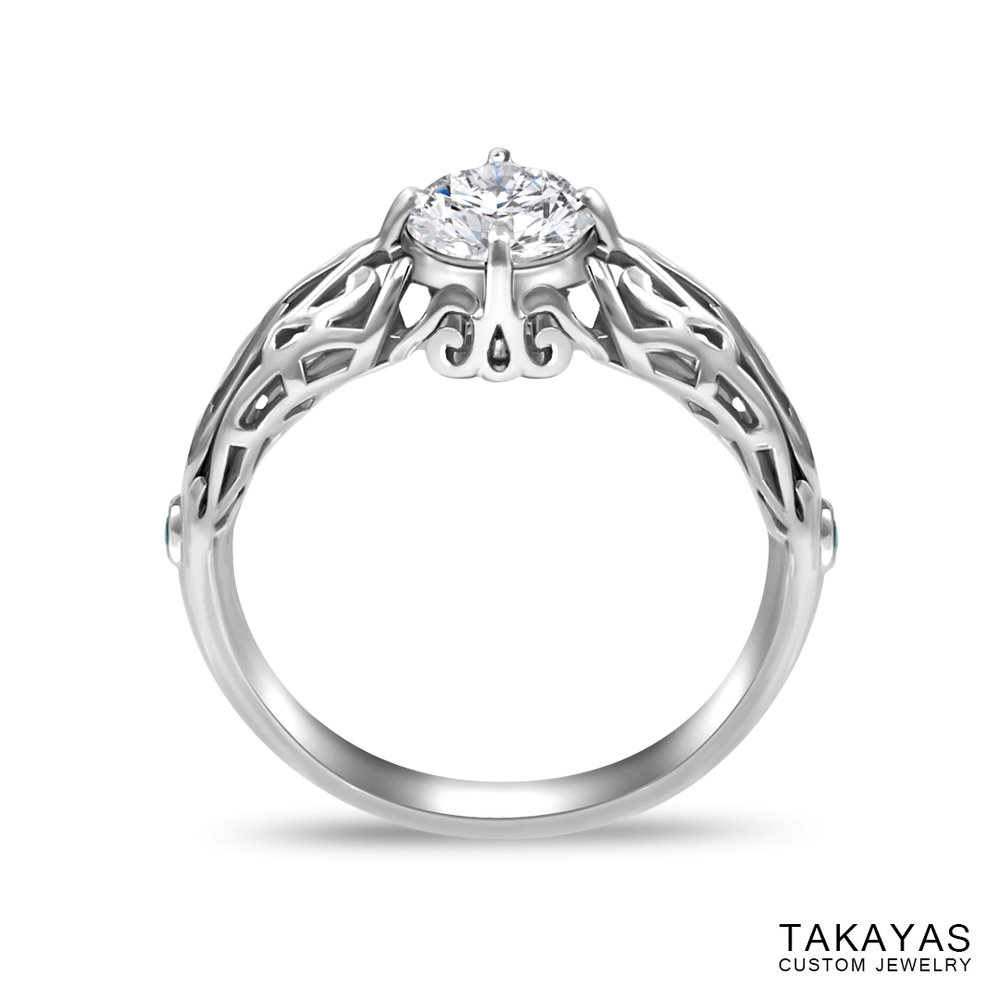 photograph of finished ring – side view (Can you see the little heart Takayas worked into the clock hand design?)

Our client loved the ring and has an epic surprise proposal planned that will happen as soon as the timing is right. We’re excited to share more details once she’s said yes!

If you love this design too, please know we cannot replicate it but, we would love to make something special and unique for you! If you’re curious about commissioning a custom jewelry piece, send us a quick email using our custom inquiry form to begin the conversation. We look forward to making you something special, too!