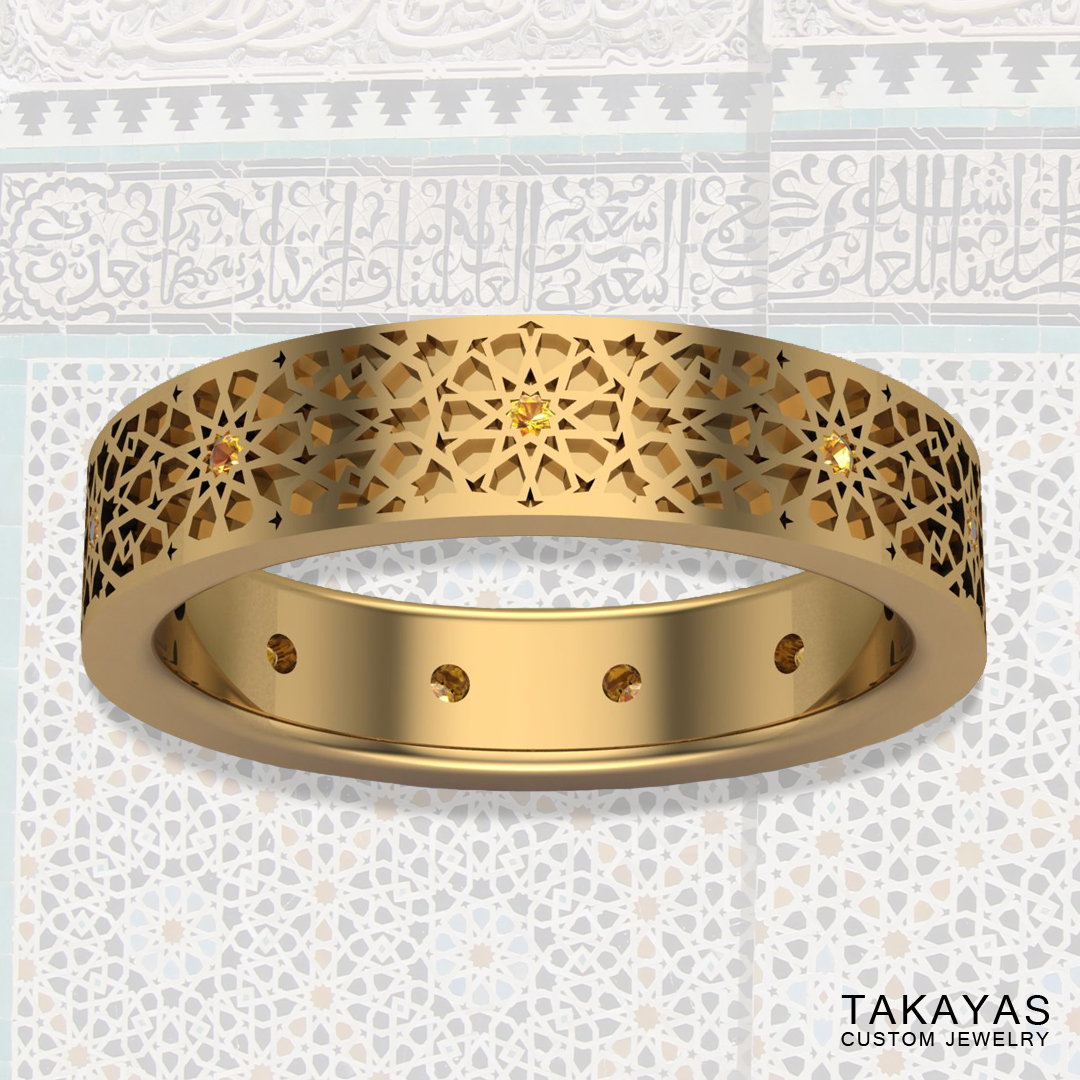 The inspiration for this ring stems from Andrew and his wife Salma’s love of Islamic art, which employs a great deal of symmetry and complex geometric patterns. Andrew explained to us:

“The main reason that geometric shapes and patterns are used to decorate mosques around the world is that the depiction of humans or other living things in pictures and paintings is considered an attempt at emulating the Creator, which we believe is an impossible feat. The use of symmetry and patterns, many including ourselves believe, is also meant to reflect logic, order, and beauty, which are some of the cornerstones of our belief that our world was created by a higher power, which is perfectly logical, ordered, and beautiful.”

He and Salma were both mesmerized by the mosaic tiling of a specific Moroccan mosque, finding that simply studying the intricate pattern was quite calming. Andrew recounted, “When our 10th anniversary came along, and the wife hinted at a ring, I knew I had to do something unique and special. And so I knew that I had to find a ring maker that could incorporate this pattern into this piece.” He found Takayas’ work online and reached out to us to bring his special ring to life. 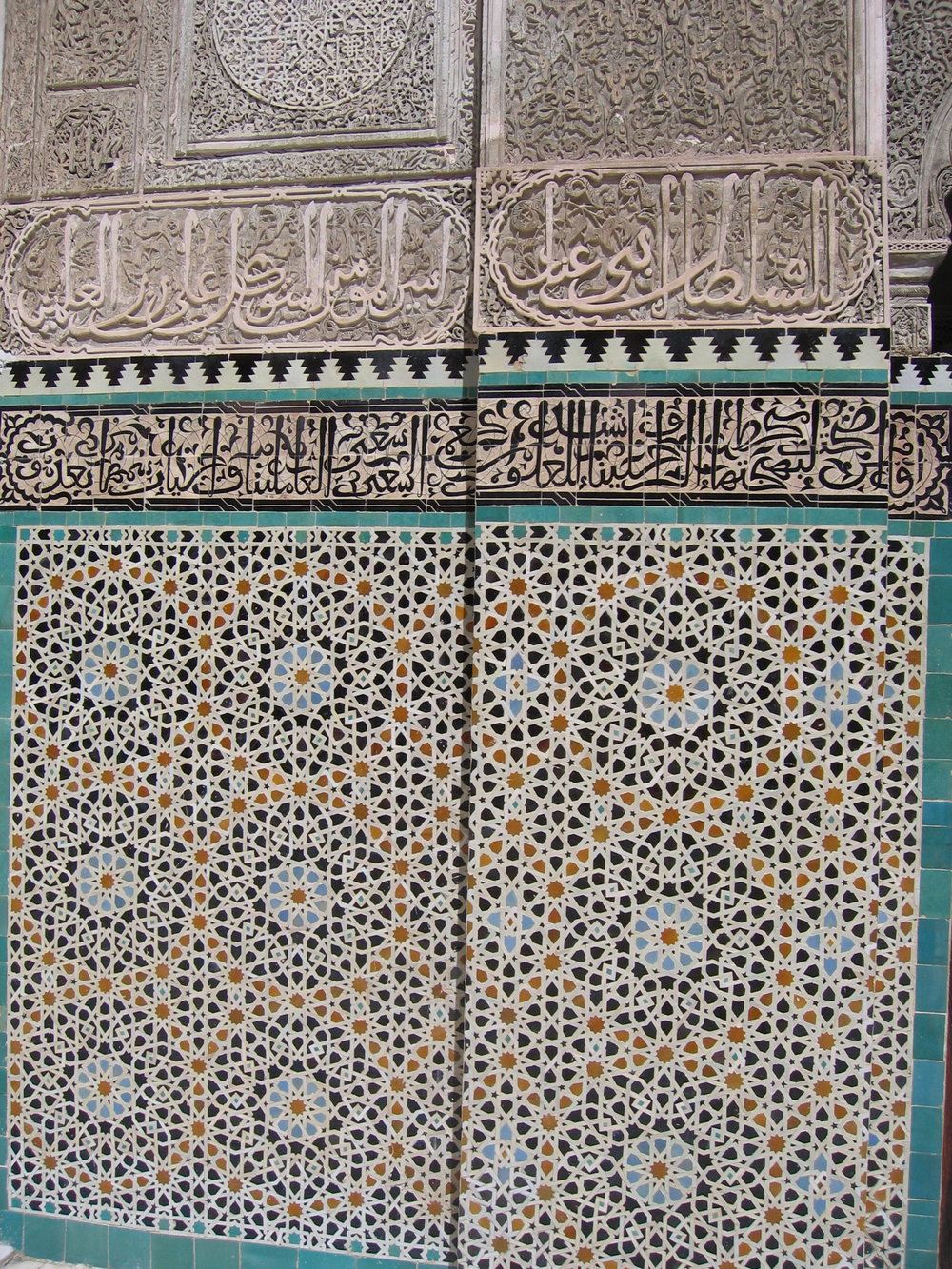 Takayas studied the reference image that Andrew provided until he found a section of the mosaic that he was able to transform into a repeating pattern for Salma’s custom eternity band. He considered incorporating both the blue and orange colors from the mosaic in the ring but, ultimately, he felt such a colorful band would end up looking more “costumey” than elegant. Instead, since the ring is yellow gold, he felt that using orange sapphires brought a subtle sparkle to the design and referenced the orange sunburst shaped tiles in the mosaic for the placement of the stones. He then set the orange sapphires from behind so the small round stones would appear to have that same sunburst shape. 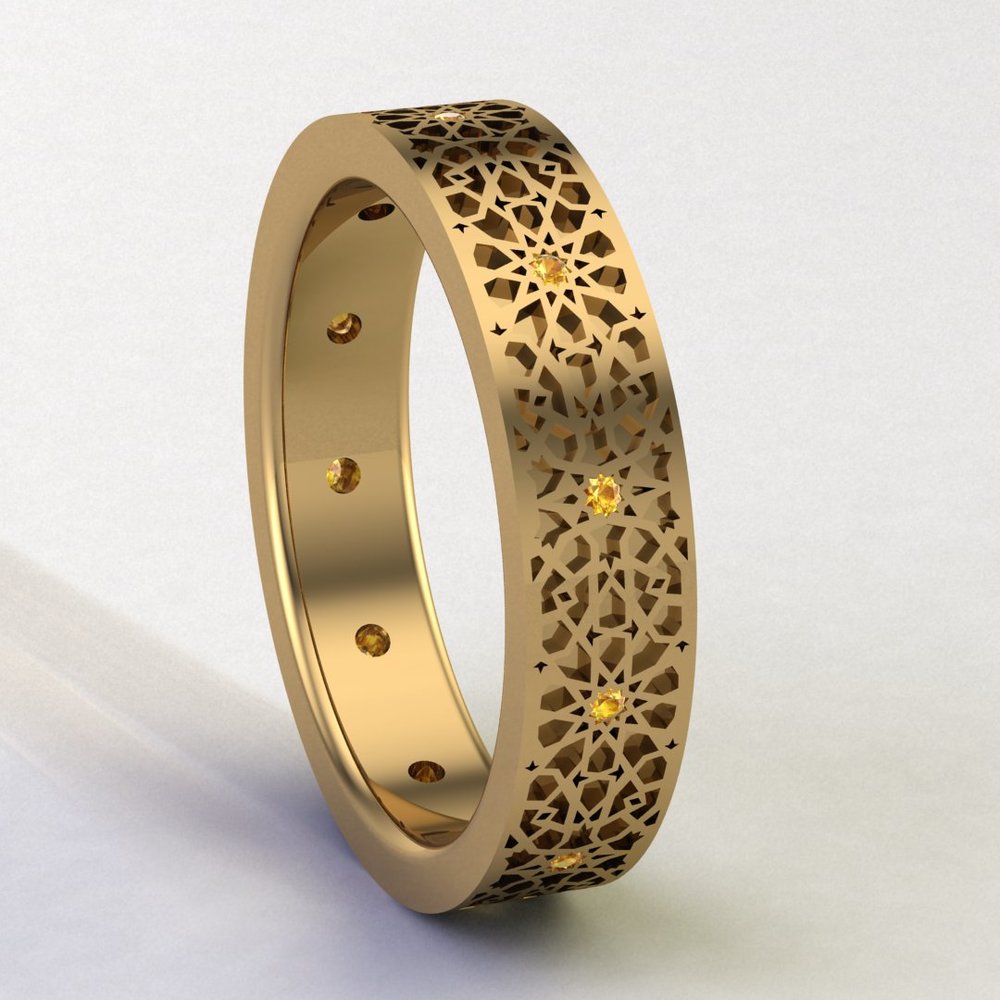 Andrew and Salma loved the finished piece, telling us, “Takayas did a fantastic job. The intricate pattern was re-created exactly and was fit beautifully along the ring. His choice of stones complemented the pattern and color of the metal perfectly. The entire process of choosing the ring material, style, price point was handled superbly well.”

the Moroccan mosaic inspired ring at home on Salma’s hand

We loved working with Andrew and are so happy that he and Salma love the ring that Takayas created for them. If you’ve been dreaming of a special ring that you would like to be made into reality, let us know, Takayas would love to help!