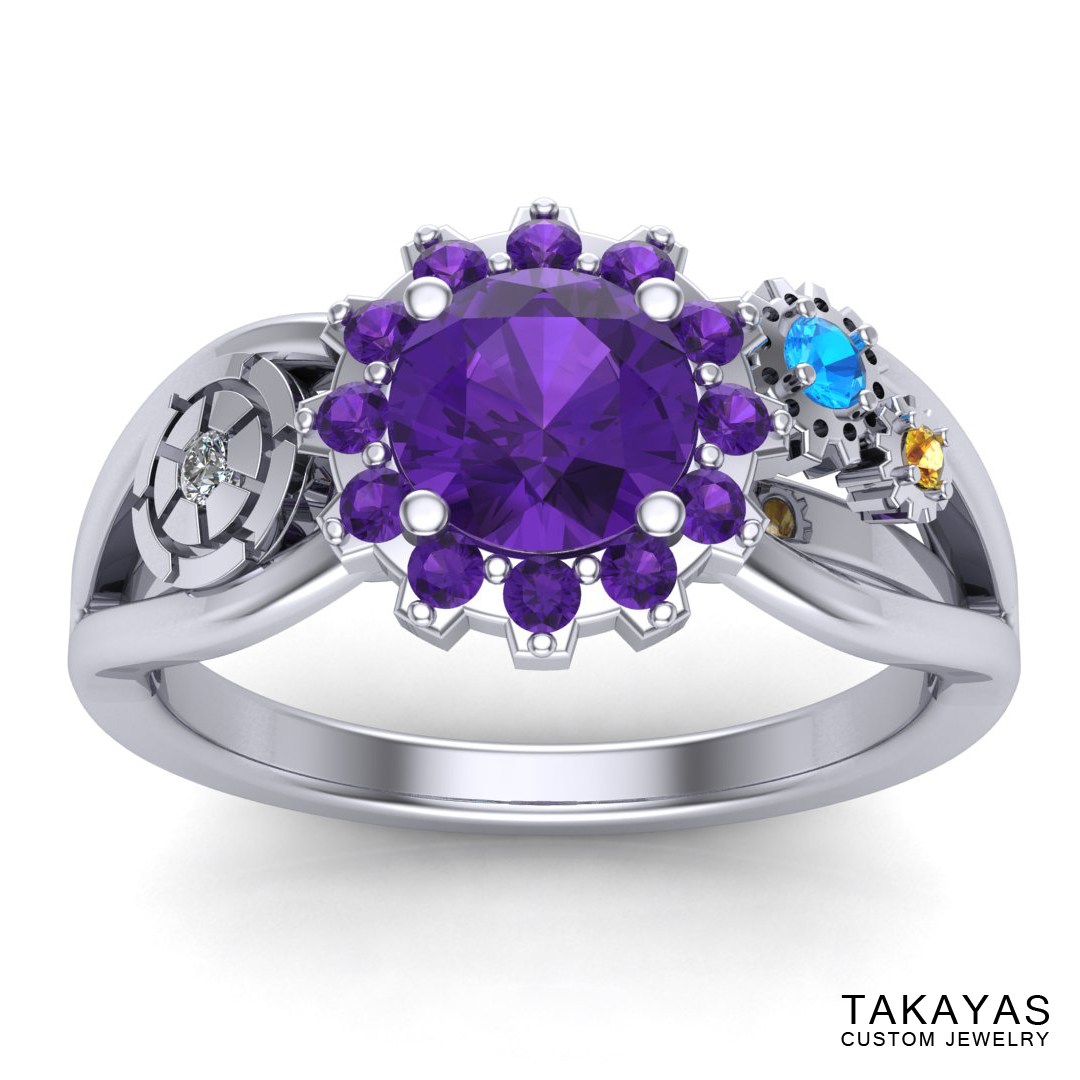 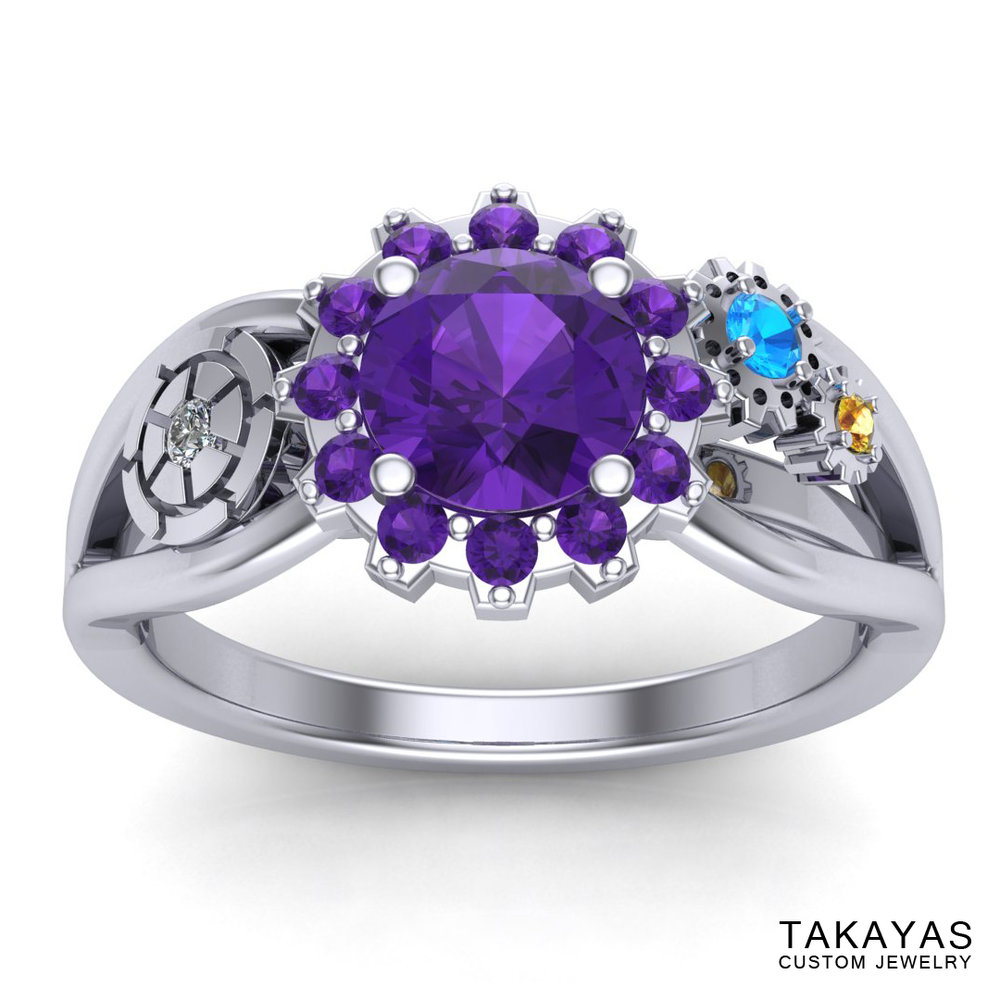 Quite a few of our custom clients have been Disney fans but, when Mike contacted us to make a Disney inspired engagement ring for his girlfriend, Ashley, he had a wonderfully unique request. He told us that Ashley’s favorite attraction at the Walt Disney World theme park is the Carousel of Progress, and his concept was to create a ring that captured her love of this ride. He sent us a few images for Takayas to use as inspiration, including a concept sketch he had created that focused on the attraction’s sign. 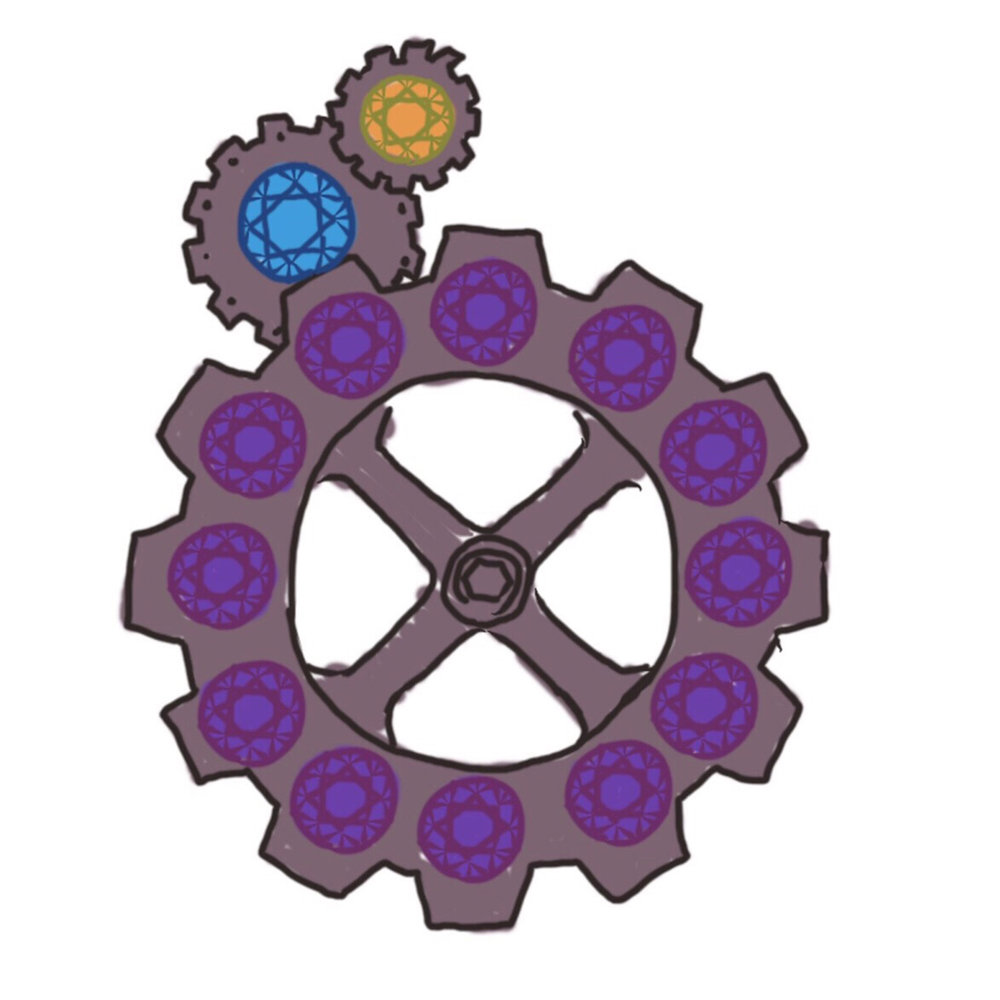 Photograph of Carousel of Progress, used as inspiration for Mike’s custom engagement ring by Takayas 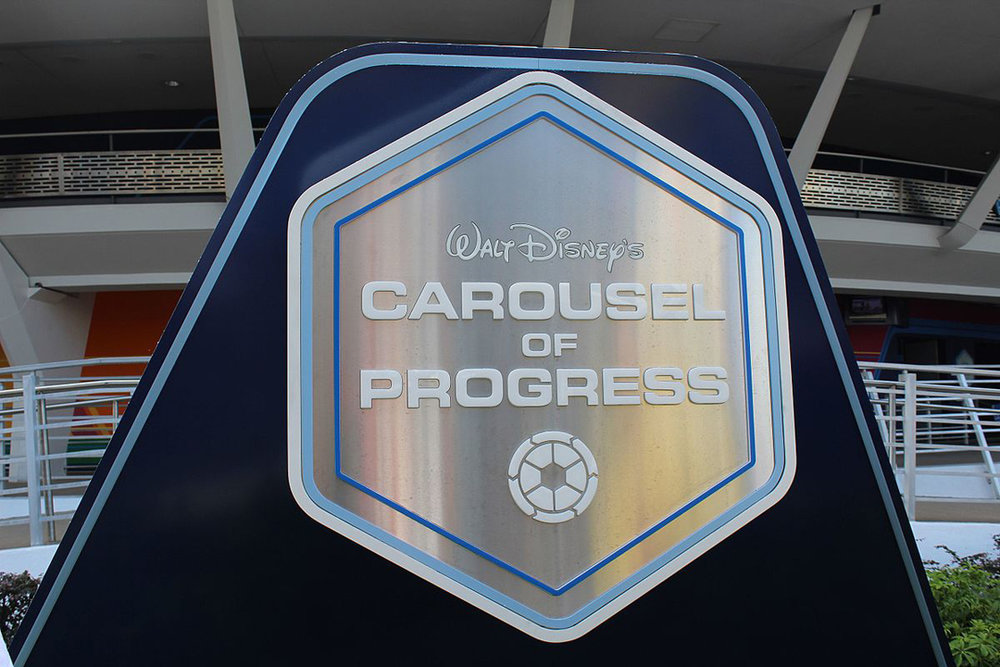 Photograph of the new Carousel of Progress, used as inspiration for Mike’s custom engagement ring by Takayas

Also, since this was meant to be an engagement ring, Takayas added a 1.00 ct amethyst center stone to Mike’s gem-studded gears concept. The blue and yellow gear colors are represented by blue topaz and yellow sapphire, with a small white diamond accenting the sleek new futuristic sign’s element. 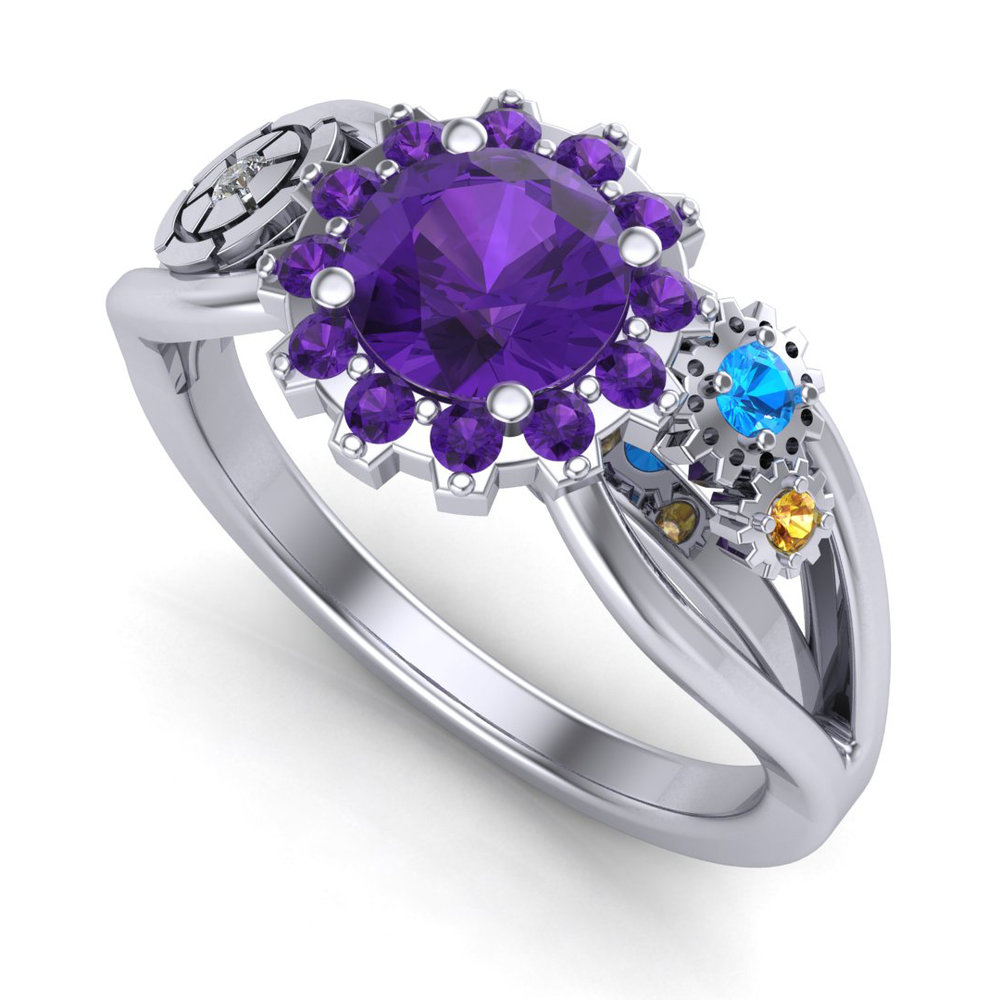 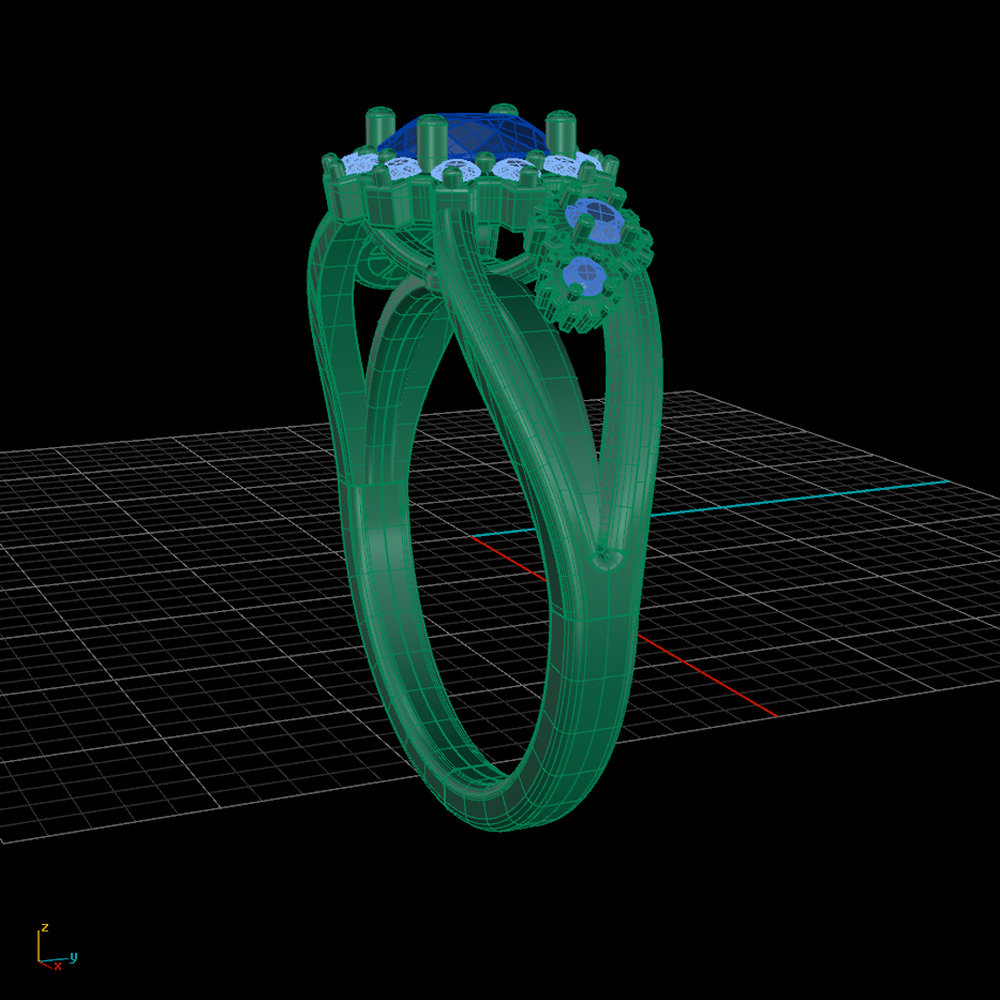 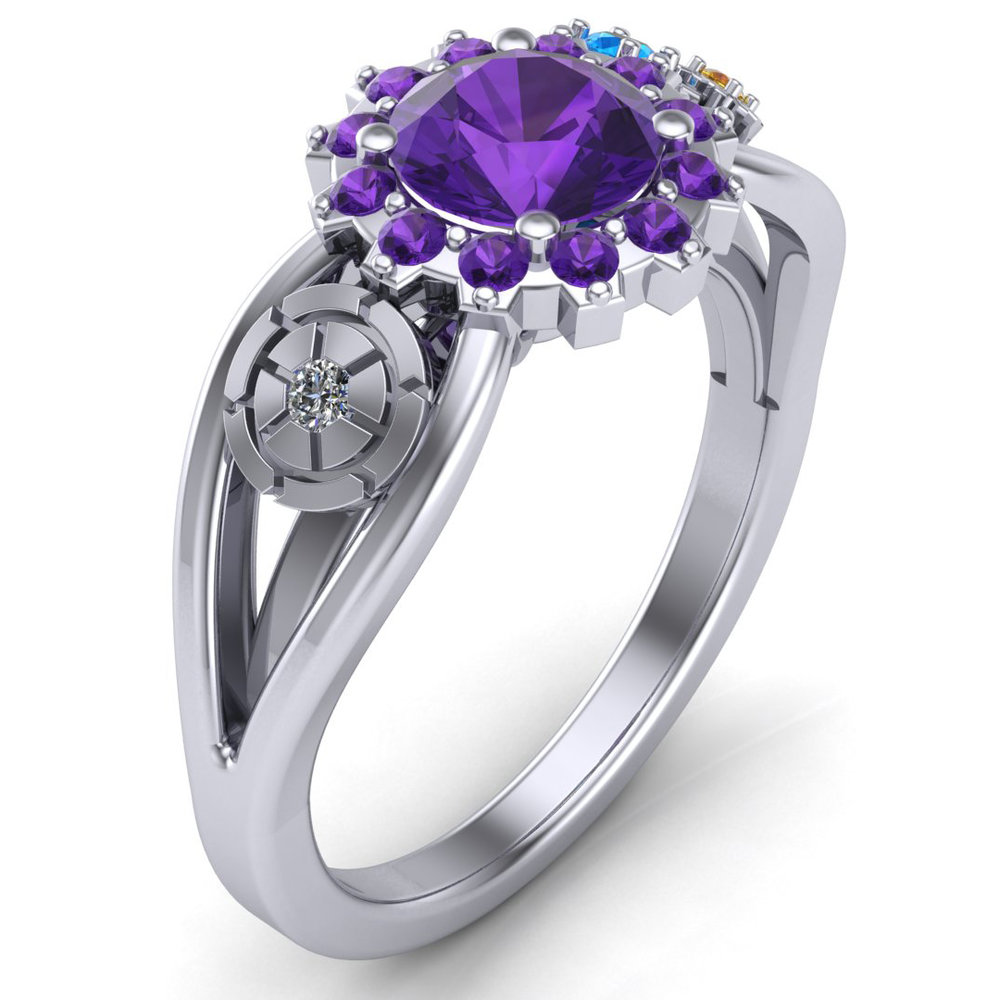 Mike’s proposal plan included a surprise trip to Disney World to celebrate their five year anniversary. I’ll let him tell the rest of the story in his own words:

“… Now, most people would propose in front of the castle but, we are not like most people and this ring is not like most rings. I knew the only place suitable for Ashley’s proposal was in Tomorrowland. Ash’s favorite attraction is Walt Disney’s Carousel of Progress. I couldn’t figure out a good way to pop the question in the theater so instead I brought her on to The People Mover that soars above the land. Before passing over the Carousel, the tracks lead us into the side of Space Mountain. I used the complete darkness of the attraction to get the ring out of my pocket. As the cars left the Mountain and the light allowed us to see again, Ashley was shocked to see me down on one knee. She almost cried as we rode above the Carousel and I asked if she would continue to make it a “great big beautiful tomorrow” for the rest of our lives and she said yes!” 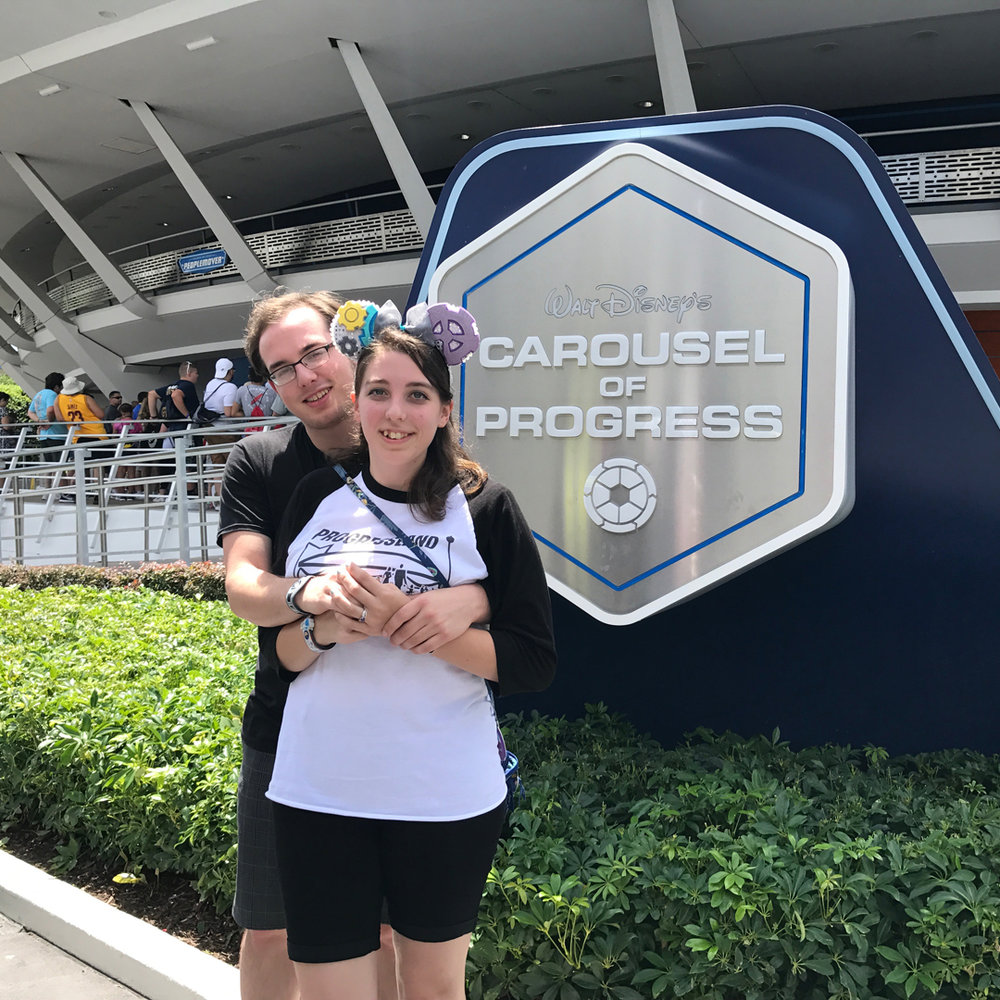 Mike and Ashley, newly engaged, in front of Ashley’s favorite ride, the Carousel of Progress

Of course, we wanted to know what Ashley thought of her special ring, too. This is what she had to say:

“The ring is absolutely perfect, I love how much thought and attention that was put into the ring. Carousel of Progress holds a lot of memories for us, now every time I see my ring I’m reminded of all the memories shared.” 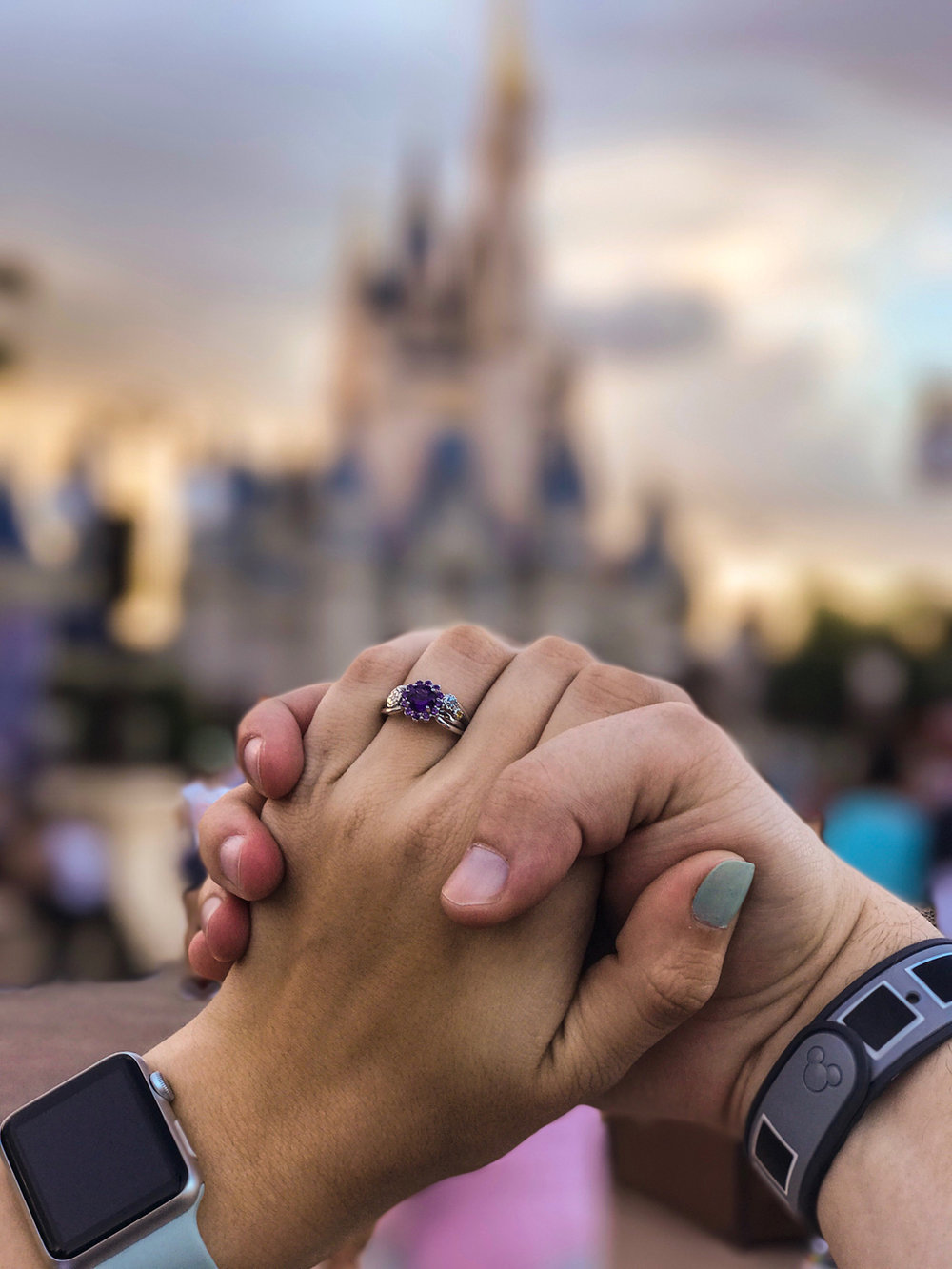 We loved creating this unique ring for Mike and Ashley and wish the couple a lifetime of great big beautiful tomorrows!